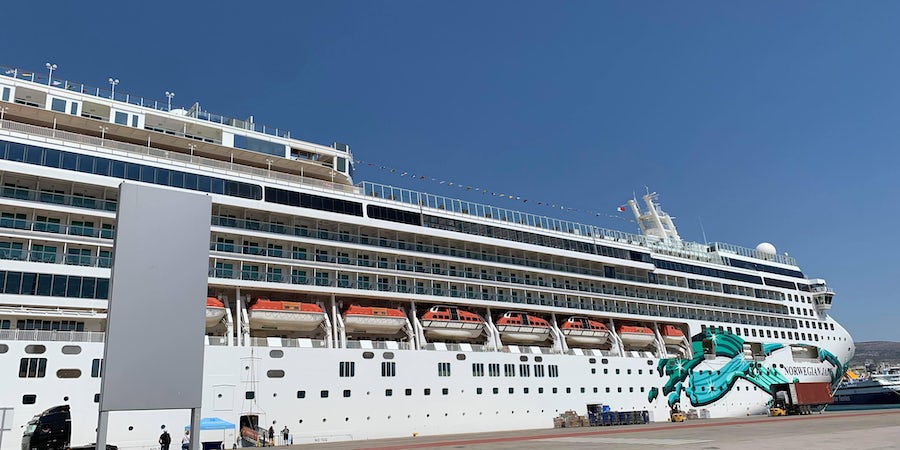 (4 p.m. EDT) -- Norwegian Jade set sail from the port of Piraeus at a little after 11 p.m. local time, making it the first of the NCL fleet to resume cruising in 16 months.

The 2,402-passenger ship is sailing at almost 75 percent occupancy with around 1,800 fully vaccinated passengers on a seven-night Greek islands cruise. EU health protocols mandate mask wearing throughout the ship.

Norwegian Cruise Line's resumption after 500 days on pause is a significant moment as it marks the last of the major cruise lines to restart, after MSC, Celebrity, Royal Caribbean, Carnival, Holland America Line and Princess, the latter two which restarted yesterday.

Norwegian Jade has just returned from a four-night sailing for 903 friends, family and employees, including NCL Brand CEO and President, Harry Sommer.

"This is a really, really special occasion for us," said Sommer, speaking at an exclusive pre-cruise event in Athens.

"This marks the start of what we call our "Great Cruise Comeback". I look back to last March and I don't think any of us thought it would last quite this long.

"We took the time to be smart, we didn't just sit and lament our situation, we doubled down on trying to create a fantastic guest experience."

Sommer said the stringent protocols -- 100 percent vaccination, pre-cruise testing, a proof of a negative PCR and end-of-cruise testing -- was designed to make a Norwegian vessel "the safest place on earth".

"What I can guarantee is there won't be widespread outbreaks, everyone will be safe and that if the occasional case happens it will likely be an asymptomatic case and life will continue onboard as normal."

Sommer also emphasised that NCL would cover the hotel and medical costs of all guests, regardless of their insurance. He said, this was a deliberate move, designed to encourage passengers to feel comfortable in telling crew if they feel unwell, rather than worrying about bills.

He also took time to thank the Greek government for their help in the resumption of cruising:

And in an announcement which even Sommer was not expecting, Kevin Bubolz, managing director Continental Europe, revealed that Norwegian Getaway would be based in a brand new homeport for NCL -- Katakolon (Olympia) starting September 17, 2021.

The announcement marks the first time NCL has added a secondary homeport in Greece, as part of its ongoing exploration of new itinerary options and is a testament to its ongoing partnership with the Greek government.

"They have been a fantastic partner and Greece is our number one destination. When we have nine ships in Europe, seven of those nine visit the Greek isles.

Sommer described the amount of bookings the line had taken since it announced its restart in April as "astonishing", with Jade the best seller worldwide.

Passengers on Jade are made up of predominantly Americans, with no children (as they cannot be vaccinated yet), and a handful of other mainly European nationalities.

NCL's restart is a little slower than the rest of the lines, with Norwegian Encore the next to resume cruising in Alaska from August 1; followed by Norwegian Gem from Miami and then Norwegian Epic from Barcelona in early September and Getaway from Katakolon, with the last of the fleet -- Norwegian Jewel -- not resuming until April next year.