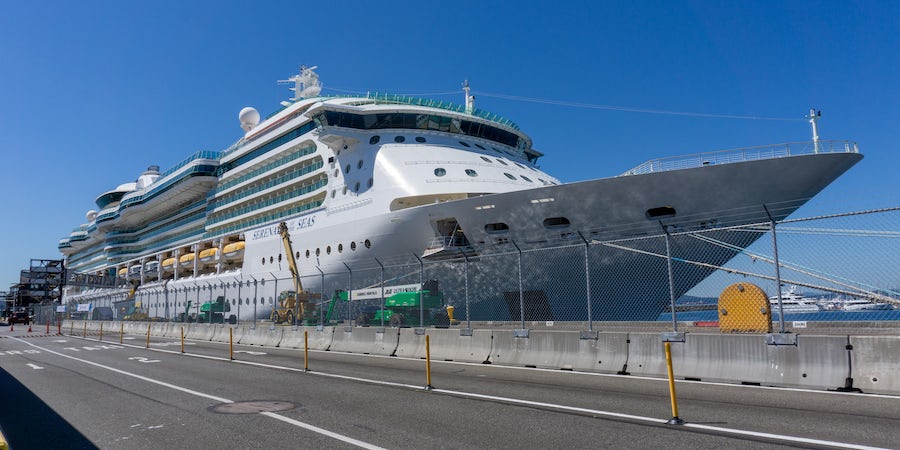 Serenade of the Seas Sails From Seattle for Alaska, Marking First Cruise Ship Back

Cruise Critic is also sailing onboard Serenade of the Seas for this week's historic voyage from Seattle, which will see the 2003-built ship become the first big-scale vessel to call on the ports of Sitka, Icy Strait Point, Juneau and Ketchikan since October 2019.

Serenade of the Seas kicks off the truncated but mighty 2021 Alaskan cruise season, one populated by nine large cruise ships operating 78 sailings -- some of which stretch into October. This week alone, three additional ships will embark on their maiden sailings from Seattle to Alaska as well. One such vessel, Majestic Princess, was being provisioned opposite Serenade of the Seas as the first passengers streamed aboard the latter.

Excitement onboard to this point has been palpable; there is a frisson in the air akin to a maiden voyage, a mixture of nervous energy and raw anticipation. Passengers and crew have a right to be exuberant: few sailings have this kind of emotional or historical cachet.

Cruisers are embarking into a new world of travel -- Serenade of the Seas is operating with a number of new health and safety protocols onboard -- but not even these requirements seem to have dampened the mood of those onboard, many of whom feel as though they're embarking on their own private yacht, thanks to the ship's low passenger count.

A technical glitch delayed embarkation at the terminal, which was slow but well-organized. These days, it's better to be thorough than fast, and most passengers took the delay in good stride. Patience is a necessary packing item, next to passports and vaccination cards these days.

Greeted by the ship's cheering crew out on the promenade deck, passengers stepped into the soaring atrium aboard Serenade of the Seas, awash in balloons and festive decorations. "Welcome Back to Adventure" is the phrase of the day onboard. Passengers embraced. A few cried. Bubbly was ordered.

Even after over a year out of service, Serenade of the Seas sparkles. Public rooms are spotlessly clean and fresh, and staterooms are well-looked after. The line's new E-Muster system took the pain out of the traditional muster (lifeboat) drill. Not everything pandemic-related is a nuisance, after all.

Shortly after five in the afternoon Pacific Time, Serenade of the Seas let its lines go and eased out into Elliot Bay before increasing speed, bound for the waters of Puget Sound, the Pacific Ocean and Alaska.

It's been a long road for Royal Caribbean to get to this point -- and passengers and crew know it. The crew of Serenade of the Seas may be masked, but the genuine smiles shine through even the strongest face covering.

Serenade of the Seas carries predominantly vaccinated passengers on this first sailing, though those under the age of 16 are currently permitted onboard without having been vaccinated. The minimum vaccination age will drop to 12 years of age as of August 1.

Vaccinated passengers are given a wristband as they embark, and a health questionnaire has to be answered on the Royal Caribbean app a day prior to boarding. There are select areas of the ship that are designated for vaccinated passengers only, like the iconic Viking Crown Lounge and the Casino. Other areas have time restrictions for unvaccinated passengers, and the rest of the vessel is a free zone for both groups.

To test its protocols out, Serenade of the Seas embarked on a simulated voyage for the U.S. Centers for Disease Control and Prevention on July 7. That sailing -- which stopped in Ketchikan, greeted by Alaska Sen. Lisa Murkowski -- proved Royal Caribbean's protocols were effective in mitigating the spread of COVID-19, and the ship was issued with a certificate to begin revenue passenger voyages.

"This short cruise season means the difference between reopening or closing for good for so many small, locally owned businesses," said Alaska Travel Industry Association President and CEO Sarah Leonard on July 9. We are grateful to our congressional delegation, governor and legislators for their hard work to bring cruise ships back to the state this year."

If these protocols are new to cruisers, Serenade of the Seas will be familiar to Alaskans. The 90,090-grt ship, arguably one of the best-constructed for the Alaska run thanks to its acres of wall-to-wall glass and abundant open and sheltered pools and deck spaces, has been sailing these waters for the better part of its service career.

It is a recognizable sight in Southeast Alaska, though a relative newcomer to Seattle after being based in Vancouver for several seasons (Canadian ports, including Vancouver, are currently closed to cruise traffic.)

While Royal Caribbean restarts the newer and arguably swankier Ovation of the Seas on runs to Alaska from Seattle this August, the company has sent its trusted ambassador and friend Serenade of the Seas to be the first vessel back in service on the West Coast.

It will arrive Wednesday morning in Sitka, emerging through the mist with a blast from its horn as if to say, "We're back!"