You may also like
Dismiss
Ships Ahoy! A Weekly Round-Up Of Worldwide Cruise Ship News
Live From Celebrity Edge: A Cruise That Seems Normal Again; "I'm So Hopeful"
P&O Cruises Restarts Cruising For First Time in 15 Months on Britannia
Another Big Week for Cruising in England as More Ships Set Sail, Arrive For Restart
Royal Caribbean's Odyssey of The Seas Cruise Ship Officially Christened
MSC Virtuosa to Return for Line’s Biggest Ever UK Season, MSC Cruises to Base Ship in the UK Year Round in 2022 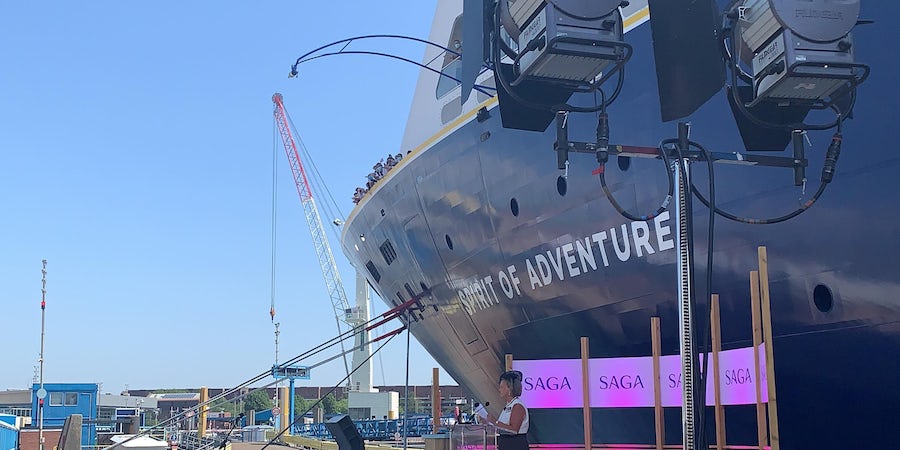 (2 p.m. BST) -- Saga Cruises' new ship Spirit of Adventure was finally named -- more than a year after it was delivered -- in Portsmouth, today.

The 999-passenger ship, a sister to Spirit of Discovery, was named by Commodore Inga J. Kennedy, the head of nursing at the Royal Navy, after a short ceremony including a blessing and speeches from among others the CEO of Saga Travel Nick Stace and the Captain, Kim Tanner.

"It's a huge honour to be sharing this day with you as Spirit of Adventure's godmother," said Kennedy.

"In taking on this role for such a spectacular cruise ship I'm not only proud as an individual, but I feel I'm representing all those healthcare professionals across the NHS and the armed forces who have supported this country's fight against COVID-19."

Watched by crew, who had lined the cabin balconies waving Union Jack flags, Commodore Kennedy then pressed the button to release the Hush House Champagne, which smashed against the side of the hull.

Spirit of Adventure will set sail on its maiden voyage on Monday July 26 on a 15-day cruise around the British Isles, including stops in Bristol, Liverpool and Belfast.

"Today has been a long time coming for everyone, so it feels symbolic that the naming of our brand-new cruise ship, "Spirit of Adventure" will be part of such an historic day for the UK," said Stace, referring to the lifting of all COVID restrictions in England.

"Those who love to travel have waited patiently for it to resume, and what better way to mark a return to the freedom that travel gives us than with the launch of a new cruise ship."

Captain Tanner said: "When I manoeuvred Spirit of Adventure into Tilbury in October 2020, I never thought it would be this long until before we could welcome guests and set sail."

The ship was handed over by Meyer-Werft shipbuilders in September 2020 and was due to take to the waters last year but, because of COVID, has remained anchored and waiting to take to the seas.

Last year was set to be a bumper year for naming ceremonies, with this ship, Celebrity Apex, Iona and Enchanted Princess all due to be christened in the U.K.

This is the first ‘real life’ naming ceremony in this country in at least 18 months. The last notable one was sister ship Spirit of Discovery, in Dover in July 2019, the godmother of whom is Camilla, Duchess of Cornwall.

Spirit of Adventure is also the first new cruise ship to be named in Portsmouth (Viking Venus was named at sea).

The over-50s line was the first to insist on all passengers being fully vaccinated and although can sail full under UK government guidelines, it will sail at 80 percent capacity.