You may also like
Dismiss
Princess Cruises Largely Cleared by Australian Authorities Over Ruby Princess COVID-19 Outbreak
Double Testing Catches False Positives: Why You Shouldn't Panic Over COVID-19 Test Result News
Protocols Employed to Contain COVID-19 Positive Cases on Costa Ship Charter
SeaDream Yacht Club Cuts Short First Caribbean Cruise Back
Live from SeaDream: When Your Caribbean Cruise Has a COVID-19 Case
Royal Caribbean Cruise Ship Returns To Singapore, COVID-19 Case Retested Negative, Passengers Disembark
What it's Like to Sail on a Cruise Ship After 2 COVID Cases are Discovered
Live From Windstar Star Breeze: A Cruise to Nowhere in the Caribbean
Live from Viking Sky in Iceland: What Is It Like Onboard?
Nearly All Cruise Lines Opt Into CDC Voluntary COVID-19 Program after Agency Softens Guidelines Around Isolation, Quarantine and Vaccine Status 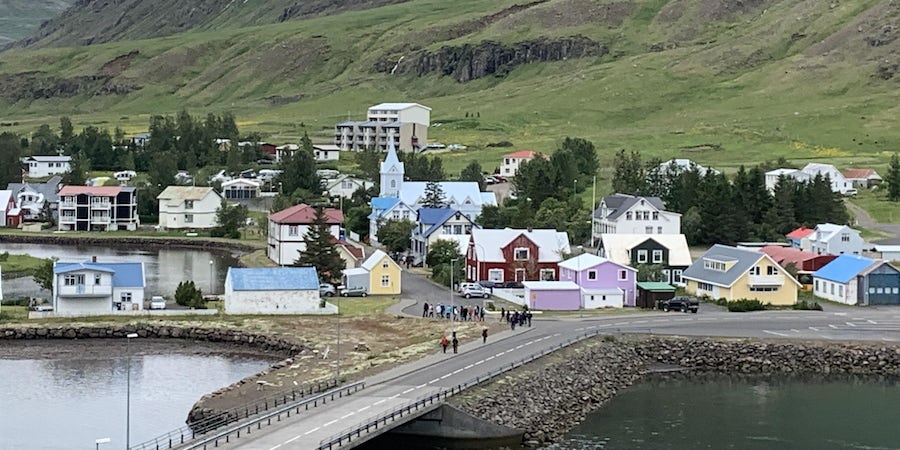 Live From Viking in Iceland: Dealing with a COVID Case on a Cruise

(1:52 p.m. EDT) Aboard Viking Sky, guests on our one-week circumnavigation of Iceland went whale- watching; hung out with puffins; visited fishing towns; and saw impressive waterfalls, stunning lava rock formations, and bubble fumaroles on the island’s west and north coasts. They caught a glimpse of the idyllic and isolated little village of Seydisfjordur on the east coast.

Then suddenly the doors to Iceland closed. One of the 760 passengers on the ship had tested positive for COVID-19.

Viking’s health and safety policies around COVID-19 are decisively more intense than other cruise lines. All guests and crew onboard have been fully vaccinated, and each day they are given a PCR test by spitting saliva into a test tube by 8:30 a.m. Each person wears an electronic contact tracing medallion, or slips it in a pocket, while on ship and ashore. Daily health questionnaires need to filled out and temperatures checked.

Perhaps it is not surprising that a positive test for COVID-19 was found in the ship’s onboard lab, where three technicians conduct the testing each day. The affected passenger was asymptomatic, underwent a nasal test which also came up positive, and was quickly isolated in an area dedicated for quarantine. Contact tracing commenced and anyone who had been within six feet of the passenger for more than 15 minutes was retested.

No other positive cases were found onboard.

What ensued was what appeared to be a communications fiasco for the local authorities. Icelandic officials were clearly scared. The country’s health officials seemed to be clearing the ship to continue on its itinerary. Then, Iceland's coast guard stepped in and sent the ship back to where the cruise began -- Reykjavik -- a day earlier than planned.

Along the way, in two ports, passengers were loaded into buses and traveled for miles miles each morning, only to have the buses called back to the ship before they even reached their destinations after authorities revoked permission. A third Icelandic port avoided our ship altogether.

Viking even flew in Vice Admiral Raquel Bono, the line’s chief health officer, for discussions with Icelandic officials to, in the words of a spokesman, “ensure our protocols are in sync” for the rest of the summer.

The cruise line stands by its decision to test for COVID-19 daily. “This testing protocol is the foundation of our Viking Health & Safety Program -- and was designed to detect any possible case early so that it can be isolated, and a potential chain of transmission can be stopped immediately,” the spokesman said. “However, with robust and highly-sensitive testing, it is to be expected that there will be this occasional positive test result. This applies even when guests and crew are vaccinated, although occurrences will be significantly reduced.”

Viking made the decision earlier this year to position its 930-passenger ships Viking Sky and Viking Jupiter in Iceland for the summer as a safe destination that guests wanted to visit as their first post-pandemic trip.

The first two sailings of Viking Sky went off without a hitch -- though on the first sailing one passenger was sent home after testing positive at the airport on arrival (Iceland ended testing for vaccinated visitors on July 1).

We were on the third sailing of Viking Sky. Viking Jupiter is currently on its first circumnavigation of Iceland as part of the itinerary Viking calls, "Iceland’s Natural Beauty".

Viking thought it had worked out its full health and safety protocols with the government. But Icelandic officials had not before dealt with a positive case of COVID-19 on a ship in one of its ports.

How It All Unfolded

We boarded the ship in Reykjavik and did an overnight there before setting sail for the fishing village of Isafjordur in Iceland’s northwest corner. Then we headed to the college town of Akureyri in the north, along the way crossing the Arctic Circle at about 8 p.m. Everything was going swimmingly.

On our fourth day, as we arrived in Seydisfjordur, population about 700, we were awoken by a strange eight a.m. message from the Captain Markus Jurland, reminding us to wear masks on the ship and onshore, including on tour buses -- even though masks are not required to be worn in Iceland. My heart gave a thump; my first thought was that someone has COVID-19.

Around nine a.m., the cruise director came on the intercom to say no one was allowed off the ship. The first walking tour had embarked and some buses were already headed to tours that included riding through the mountains to a town to learn all about elves. The buses were called back to the ship.

The Captain came on again at 10 a.m. with word about the positive case of COVID-19 onboard and that the ship was working with Iceland's health officials on shore-side protocols. The cruise director announced an extra lecture.

Guests were generally understanding. “I think it’s to some extent to be accepted that something may happen,” said Barbara Greenwald from Virginia. “We came here to Iceland because people are careful, and therefore if they don’t want us because someone on the ship has Covid that’s fine with me. We’re having a great experience.”

We ended up heading to our next port, leaving Seydisfjordur six hours earlier than planned.

The Captain said, “Please be assured that our comprehensive and advanced protocols worked exactly as they were designed. To detect any possible case so it can be isolated and a potential chain of transmission can be stopped immediately.” He also explained that Iceland had never had a situation like this, “and there is naturally a learning curve so we do apologize for the impact to your day.”

There was optimism up until the next morning that tiny Djupivogur, population about 300, would welcome us with open arms. They did -- and then they didn’t.

My husband and I were on a bus that had already traveled 62 miles down Iceland's Ring Road to see Europe’s largest glacier. We saw impressive basalt mountains with layers of strata formed over millions of years and rivers formed by glaciers. And then we were called back to the ship. Local authorities had revoked their permission once again.

The Captain was sounding both authoritative and frustrated. “Safety first, we appreciate your understanding,” he said as we embarked on another unexpected sea day. “We are as disappointed as you are.”

By evening there was another announcement from the Captain, after an order from the Iceland coast guard required us to return to Reykjavik. “With our robust protocols in place the Icelandic public health authorities were confident we could proceed as planned. While we are still sorting out what has caused the local authorities to respond as they have, it appears there may have been some communications difficulties. We also understand the importance especially in the smaller communities to keep residents safe, which is in fact one of the important reasons why we do testing daily.”

Passengers remained calm, eating lobster Thermador and Dover sole in The Restaurant, where Marilyn Booth showed off her beaded purse, with the words, “Keep Calm and Cruise On.”

By the time guests returned to their rooms there were letters informing them that they would receive a 50 percent refund on what they had paid for their cruise, in the form of a future cruise credit. Impressively, the credits appeared in everyone’s email the next day.

And we awoke to news that drinks were on the house for the last day of the cruise.

As we sailed to Reykjavik, we encountered rough seas. But word came that we had been cleared to disembark on Saturday, July 17 as planned, and Viking Sky has also been cleared for its next sailing later that day.

Sailing This Summer? Be Prepared For Changes

Not all ports or countries around the world are ready to handle even one case of COVID-19. So if you embark on a sailing this summer, you should be prepared for itinerary changes.

Maybe it’s just our luck, but my husband and I have done two cruises so far, the first on Windstar Cruises’ Star Breeze from St. Maarten. Between the two we have experienced normal operations at two of 12 ports of call -- our first two ports in Iceland.

Still, in both cases we were on ships where operations were flawless and crew as friendly as can be.

Said our Viking Sky cabin steward, Nick, smiling through his mask as we walked down the hall to lunch today, “Thank you for looking on the bright side.”