You may also like
Dismiss
2019 Atlantic Hurricane Season Outlook: What Cruisers Need to Know
Just Back From Hurtigruten's Finnmarken: The First Cruise Ship to Set Sail, Post-Covid
Norwegian, Royal Caribbean Team Up To Create Cruise Health and Safety Protocols
Marella Cruises Reveals New 2021/22 Itineraries to the US, Caribbean and Asia
Cruising the Newest Ship Afloat: Live From Celebrity Apex
Live From Celebrity Edge: A Cruise That Seems Normal Again; "I'm So Hopeful"
Royal Caribbean's Odyssey of The Seas Cruise Ship Officially Christened
These Ships Are Coming Back To The U.S. in 2022: Here’s Why You Should Care
Royal Caribbean Starts Construction On New Utopia Of The Seas Cruise Ship
Just Back From Allure of The Seas' Maiden Galveston Sailing: Hits and Misses 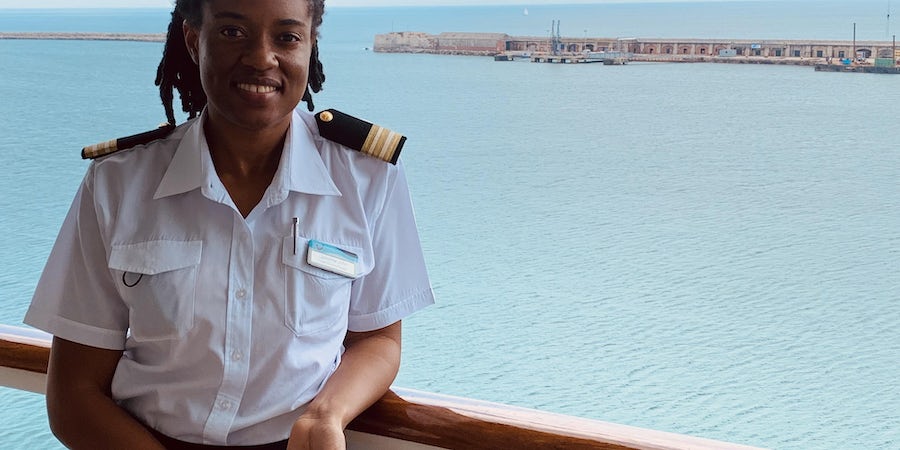 (1: 45 p.m. BST) -- Jovonne John fell in love with travel while representing St Vincent & The Grenadines at netball and her competitive spirit has seen her rise through the ranks of Marella Cruises, from ice cream girl to Guest Relations Manager onboard Marella Explorer.

We caught up with Jovonne on Marella Cruises' first sailing in 15 months, a three-night cruise along the South Coast, calling into Dover in Kent and Portland in Dorset from Southampton.

Here she tells us about life growing up in St Vincent, her 82 days at sea during the height of the pandemic -- and how she got her big break onboard.

What was life like growing up in St Vincent?

I didn’t have all the fancy things in life but my grandmother instilled values into us – ‘to work for what you want to achieve in life’.

When did you first start travelling?

I was quite young when I started to visit other islands because I was a sports ambassador for St Vincent & The Grenadines. I captained the Under 16s netball team and progressed to the Under 23s senior national team and played in Barbados, Antigua, Trinidad & Tobago and St Lucia.

After a hand injury I retired from the sport but having a competitive side I started to enter beauty pageants so I could travel again. At 21, I was crowned Miss St Vincent and the Grenadines, that was after lots of pageants including Miss South Leeward Islands and the Miss Tourism Queen in St Kitts.

How did you get into cruising?

My younger sister Jodesia joined MSC as a shore excursion rep and when she came back home, talking about the lovely places she visited, I was so jealous and said ‘how can I do this?’

When did you join Marella Cruises?

I sent off applications and joined Marella Celebration as a junior waitress in 2016.

Did you have any previous experience?

Yes. I helped at my aunt’s restaurant and later studied hospitality at college before becoming a sales rep for the St Vincent Brewery.

How did you find working life on the ship?

I loved being part of the ship’s company but I had to learn the ship’s standards; everything was so fast and at first I was totally lost. I was the only girl on the restaurant team so they looked after me.

What do you like most about being at sea?

Meeting so many people because I am outgoing and love learning about other cultures.

Was it easy to progress?

One day I was on buffet duty as the ice cream girl and told to go and see the food & beverage manager. I thought I had done something wrong but he said ‘the passengers love you’ so would I like to try being a receptionist?

I am ambitious so I said ‘yes’.

Again, I went through the training. I made mistakes but I was always motivated, learning from my errors.

I went on to become senior receptionist and then guest relations manager. It didn’t hit home that I was part of the senior management team until the first Captain’s Gala Night when I stood next to the F&B manager who promoted me from ice cream girl!

What does your job involve?

I oversee the embarkation and disembarkation of all passengers which includes coordinating with shoreside port agents. I am in charge of the reception team; we monitor and try answer guests’ questions and any complaints. I am always liaising with other heads of department so no two days are the same.

How were you affected by the pandemic?

I went to join the set-up team on Marella Discovery in February 2019. On the journey there I observed half-empty planes and people wearing masks. Everything was changing quickly.

After 16 days we were disembarking passengers and from there we found that if we had been to one port, another would not allow the ship to dock. It happened more and more until there was nowhere to go.

Our captain was brilliant and kept us informed. We managed to get ashore to stock up with essentials. I had a trolley full of sanitary pads, soap powder, protein bars and anything I could cook in a kettle!

We were at sea 82 days and halfway through we started to get short of supplies so the company arranged for us to stop in Africa to stock up.

It was a case of keeping everyone motivated. I arranged an Indian sunrise yoga session, evening gym sessions and we even had a Gala Night with a dinner – the captain and everyone got dressed up and the entertainment team put on a show.

We live like brothers and sisters but there were plenty of tears, it was a difficult time as we had no idea how long it would go on. Everyone was healthy, so we embraced that.

What did you after getting off the ship?

I went home to St Vincent. My sister and I turned over the whole garden to grow vegetables like eddoes and ochre. I love farming and we bought five goats, too.

The crew has been back on Marella Explorer since April and we are hoping they can soon start to get off the ship when mooring in UK ports. We are a happy ship but everyone's missing that freedom.

It gives us a boost to go shopping in Primark!