You may also like
Dismiss
Coronavirus: Updated Cruise Ship Policies and Cancellations Because of COVID-19 (2021)
Did Ed Sheeran Name His Baby After Antarctica Cruise?
Adventures by Disney to Offer First Expedition Cruises Geared Toward Families
Cruising the Newest Ship Afloat: Live From Celebrity Apex
Live From Royal Caribbean's Odyssey of the Seas: Why You'll Never Be Bored on This Cruise Ship
Disney Wish To Feature New Onboard Entertainment Firsts from Disney Cruise Line
NCL Reveals More Dining, Design Details on New Cruise Ships Norwegian Prima and Norwegian Viva
These Ships Are Coming Back To The U.S. in 2022: Here’s Why You Should Care
A 'Thor: Love and Thunder' Cameo That Gets Cruise Fans Excited 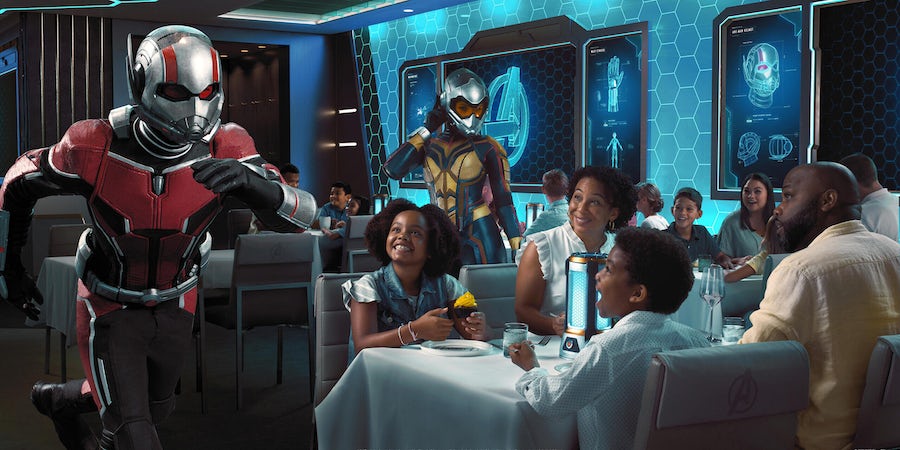 "Avengers: Quantum Encounter" will be the first Marvel cinematic "dining adventure" in the restaurant, known as Worlds of Marvel, for the line. Disney cruise ships are already seen as innovative in the industry for having passengers and their waiters travel between three different main restaurants during the course of their voyage.

Equipped with a worldly menu inspired by the Marvel universe, diners will be treated to a full-blown production featuring Ant-Man, The Wasp, Captain America, Captain Marvel and -- of course -- fellow passengers -- as they attempt to save the day.

Each table at Worlds of Marvel will offer an interactive Quantum Core, "a brand-new device that can cause objects to shrink and grow remotely," states Disney Cruise Line. "Guests will assist Ant-Man and The Wasp as they attempt some small-scale trials, perhaps shrinking oversized luggage for easy stateroom storage."

The new themed dining venue is sure to be a hit with Marvel fans and families, many of which will have already been exposed to the Marvel universe as one of Disney Cruise Line's hugely-popular "Marvel Day at Sea" cruises.

"'Avengers: Quantum Encounter’ is Disney Cruise Line’s most ambitious dining experience ever,” said Danny Handke, senior creative director, Walt Disney Imagineering. “We’re doing something that’s never been done before in a restaurant, developing an exclusive Avengers adventure that will immerse our guests in the action through sophisticated technology and innovative storytelling. It’s the perfect complement to the incredible menu of story-driven dining aboard the Disney Wish."

Worlds of Marvel is the latest dining venue to be revealed aboard Disney Wish. All of Disney Cruise Line's vessels have uniquely-themed main restaurants onboard that differ from ship to ship, with the exception of Animator's Palate which is on all.

At Marceline Market -- named after Walt Disney's childhood hometown in Missouri -- passengers will find a food hall-style market offering a changing menu of specialties offered at 10 food stalls. The venue will be styled as an old industrial loft converted into a marketplace, with Disney characters serving as proprietors of each stall.

Open for breakfast and lunch, Marceline Market will turn into a table-service dining venue in the evenings.

Mickey and Friends Festival of Foods will offer casual treats, including soft-serve ice cream, as well as the line's first barbecue and Mexican-inspired fare.

Disney has previously announced two other dining venues, including Disney's first Frozen-themed theatrical dining experience and 1923, which pays tribute to both the golden age of animation and California-inspired cuisine.

The ship will also feature the line's signature upscale Palo restaurant, designed for adults only.

Disney Wish debuts on June 9, 2022. It will operate three-and-four night cruises to Nassau and Disney's private island, Castaway Cay, from Port Canaveral throughout the remainder of the year.