You may also like
Dismiss
Celebrity Cruises Reveal's Details of Apex's 2020 UK Itineraries
What Are Cruise Lines Doing With Their Empty Ships?
Celebrity Cruises Confirms July Restart from Southampton
Celebrity Edge Sets Sail From Fort Lauderdale, Marking Cruise Industry Return In U.S.
Another Big Week for Cruising in England as More Ships Set Sail, Arrive For Restart
Celebrity Silhouette Sets Sail on First Cruise in 15 Months
Back On Celebrity Silhouette: From March 2020 to the Ship's First UK Cruise
Government Raises Fully Vaccinated Cruise Ship Capacity Limit to 50 Percent
Saga Cruise News: New Ship Spirit of Adventure Named in Portsmouth
Live From Marella Discovery in the Aegean: What It's Like Onboard One of the First UK Cruise Ships Sailing Internationally 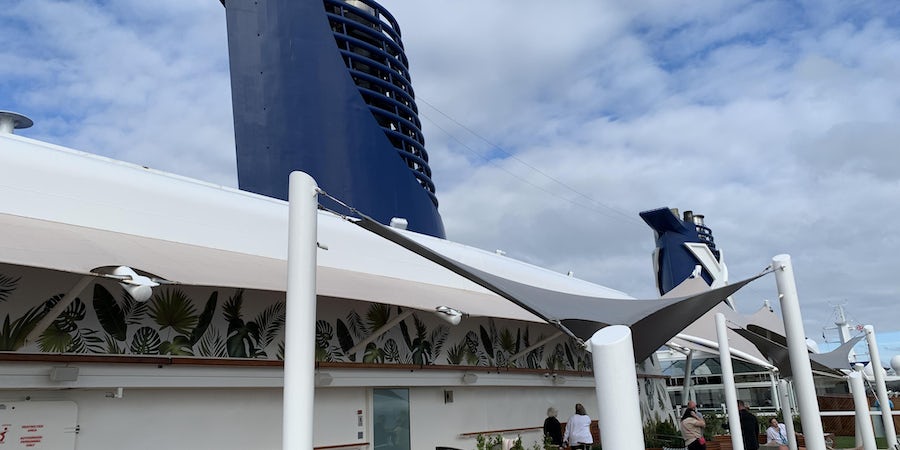 The line is also considering cruising internationally from Southampton on the 2,995-passenger Celebrity Silhouette after September 4, when the current round-England itineraries are scheduled to end, Jo Rzymowska, Celebrity's vice president and managing director for Europe, Middle East and Africa, told Cruise Critic.

At present, government guidelines still mandate 50 percent of capacity or 1,000 passengers -- whatever is fewer -- which restricts larger ships like Silhouette from sailing half full. However, there is a strong indication that this will be revised upward in the next few days.

"The capacity limit is being lifted imminently to 50 percent of capacity, and we are ready to go with that," Rzymowska said from onboard Silhouette's first sailing in 15 months.

"The first three sailings are sold out at the capacity that we are at, so we will be able to open it up and get more people onboard, and that's what we are looking to do,"

Rzymowska said the line was following all the guidelines as on land, including mask wearing in public spaces, but added:

"Once we hear what the government announcement is, and if post-19th July we go back to normal, then from the guest point of view we will again follow those guidelines.

"So if mask wearing is removed on land, then it will be removed on here. That said, if people want to wear masks then we will absolutely respect that."

She confirmed that ship-booked-only shore excursions would also be reviewed and could be changed on the July 19, allowing people to wander at will:

"I'm confident that during the season passengers will be able to explore on their own once we get the new information."

She also said she was confident that Scotland would start welcoming cruise passengers during this season.

Silhouette's domestic cruises are scheduled to end September 27, but the ship is here until the end of October.

"We haven't yet announced after that because we are just waiting on a few things, but the ship is definitely going to be here until the end of October.

"So depending on what happens we may be able to offer some Europe itineraries from early October, but we have to patient and see what happens," she said.

Speaking about how she felt the moment the ship set sail July 3 for the first cruise since the start of the pandemic, Rzymowska said:

"Emotional and proud are the two key words that come to mind. Proud of the incredible onboard teams and the crew in particular and how they are just so excited to welcome all of our guests back, it's been euphoric to see that.

"And proud of my team and all the work that we've done from a sales and marketing point of view."

She added: "When the guests came onboard, it was just incredible. It was emotional, really emotional.

"And meeting all of our loyalty guests again has been really really special, and just to see them.

"For them this is home away from home. This is how they feel about our crew and our ships, they have missed them so much, as we have missed them, so that was very special."

The line put aside 100 cabins for NHS workers on this first cruise back, 200 of who were onboard the first sailing:

"To be able to do a tiny bit to say thank you to the NHS workers back was so special," she said.

The passenger make up on this first cruise is mainly returning Celebrity passengers, with around a third new to the line, according to Rzymowska, though it's not clear how many are new to cruise.

However, she said that due to continued uncertainty around international travel and a lack of supply and sky-high prices for land-based holidays, the line had been getting bookings from people who had never cruised before:

"As international travel is very unclear at the moment and the fact that staycations are the holidays people are doing, this is a great way for people to experience a great holiday they might not have thought of before.

"I've got 10 new to cruise onboard, they'd never have done it, let alone the British Isles. It's a great opportunity."