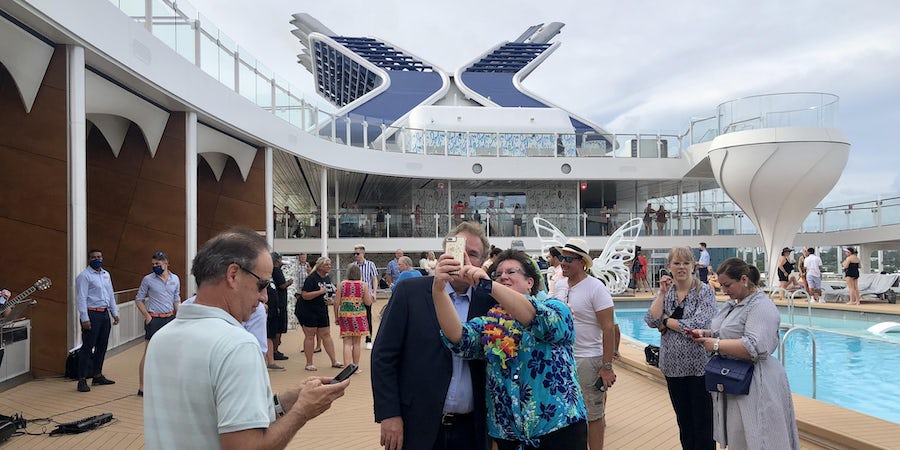 (4:55 p.m. EDT) The Royal Caribbean Group hit the high seas with a splash this past week, with its first two ships sailing from U.S. homeports after being docked throughout the long COVID-19 pandemic.

Celebrity Edge made its debut in Fort Lauderdale on June 26, followed less than a week later by Freedom of the Seas from Miami (both Celebrity and Royal Caribbean are part of parent company Royal Caribbean Group, along with luxury brand Silversea).

Both sailings were attended by Royal Caribbean Group Chairman and CEO Richard Fain, who appeared as happy to be onboard as the loyal first cruisers.

Onboard Celebrity Edge, he was everywhere those first few days, pouring drinks at sailaway, taking selfies with passengers and hamming it up with the bartenders at the Martini Bar.

During the cruise, he sat down with Cruise Critic for an interview. Here are excerpts from that discussion:

Cruise Critic: I was on Adventure of the Seas (when it made Royal's first Caribbean restart in The Bahamas), and there's a marked difference in the vibe on Adventure, which has a lot of social distancing signage, as well as Windjammer rules, versus what I'm experiencing here on Edge (where things seem more normal). Can you talk a little bit about why that is and why is it different on Royal vs. Celebrity? And then, I'm guessing that it will be even different on Silversea.

Richard Fain: So, I think Silversea will be closer to this, but we're still learning. And there are different criteria depending on how many vaccinated and unvaccinated people you have. But we're still learning and it will evolve. Next week I suspect it would be different on this ship too, but we did get the ratings back from the cruise which you were on, and they were outstanding.

CC: When you say it might be different next week, what are you thinking is going to change?

RF: I have absolutely no idea. It's just that things are moving so quickly that they're always going to be change. But by and large, we're moving in the direction of greater freedom on the ships, because the science has advanced so much, and people see them as inherently safer and easier to control than other things.

CC: What capacity are you hoping to get to by the end of the year in terms of the ships?

RF: We're starting low. We have been very clear that we wanted to start the flywheel, but you don't start a flywheel at a high speed. You start it slow, and you keep building up.

Essentially, every one of these return to services, it's like the startup of a new ship, except that it's a little harder because people have been away for so long. We're starting up at low occupancies, as we have on this ship, and then we expect them to build up. I hope it's reasonably quick. It won't be too quick because it takes a while to retrain all the crew.

I really would have liked to have known in January where we would be sailing in July. And I think we could have had a lot better bookings, but there aren't that many people who book their July cruises in July.

CC: Is keeping the capacity low a way of keeping pricing at a stable level?

RF: I don't think that's the prime driver because there's so much pent up demand. I don't think it's the price that's the key driver today. I think the demand is relatively price inelastic. (Inelasticity refers to consumer habits remaining largely the same regardless of price).

We've talked about how well prices have stayed up for 2022 and 2023. And that's more what we're looking at: 2021 has been a terrible year and will end up being a terrible year. My focus is getting the flywheel moving and making '22 and '23 good years, better years.

CC: Freedom of the Seas is starting with different protocols for vaccinated vs. unvaccinated guests, and where they can go. Can you talk a little bit about how it was to draw up that list?

RF: You know the (CDC) rules are complicated, and we needed to accommodate all types of guests, but we think that the vast bulk of the people onboard are going to be vaccinated. Most of the unvaccinated are children, so it didn't take a lot of thought to say, "Let's make most of the casino only for vaccinated people." That gives greater freedom for them, and the unvaccinated could use a section of it, so they still have the capability.

CC: How is it going to be enforced onboard? How will the crew handle these delicate situations?

RF: We have special training for that because it is delicate. We need to treat it as delicate. I think one of the benefits we have is, unlike some other things I might go into whether that's an airplane, or a train, or a restaurant, everybody's in a good mood onboard. And don't underestimate the importance of the overall fact that everybody's having a good time.

Those who come, we're being very clear what the rules are ahead of time. I think where people have problems is where they're surprised. 'Oh, I thought this was all going to be like this, and now you're telling me it's like that'. So, we're going to great lengths to make sure we're informing everybody in advance, what the protocols are going to be.

RF: We got a lot of milestones going, and that's one of the reasons why we're doing it carefully. When you have that many challenges, you want to minimize your risk as much as possible because the one thing we can't afford to do is to disappoint people on the safety or quality of our product. We're really being careful out there.

CC: Is there anything you want to tell Cruise Critic readers?

RF: It's been so gratifying. I am just blown away with the loyalty of our crew members who have stood by us and waited patiently, suffered while they've done so, but they've been there for us and they're coming back eagerly and happily.

If there's one thing I regret, it's we had trouble keeping up with all that. As a result, I think we were not as responsive to our guests, and especially our loyal guests, as I would have wished. We're doing our best to correct that.