You may also like
Dismiss
Celebrity Cruises CEO Dishes on Refurbs, Suites-Only Spaces and Other Industry Hot Topics
Live From Variety Cruises' Galileo: The First Eastern Mediterranean Cruise in COVID Era
Live From MSC Virtuosa: Back on a Big New Cruise Ship For the First Time
Just Back From MSC Virtuosa: Hits & Misses Of Being Back
What it's Like to Get on an International Cruise: Live From Celebrity Millennium
Celebrity Cruises to Drop Mask Wearing and Capacity Limits if Government Guidelines Allow
Government Raises Fully Vaccinated Cruise Ship Capacity Limit to 50 Percent
Saga Cruise News: New Ship Spirit of Adventure Named in Portsmouth
Live From Norwegian Jade: What It's Like On The First NCL Cruise Back in 16 Months
Regent Seven Seas Becomes Latest Cruise Line to Resume Sailing 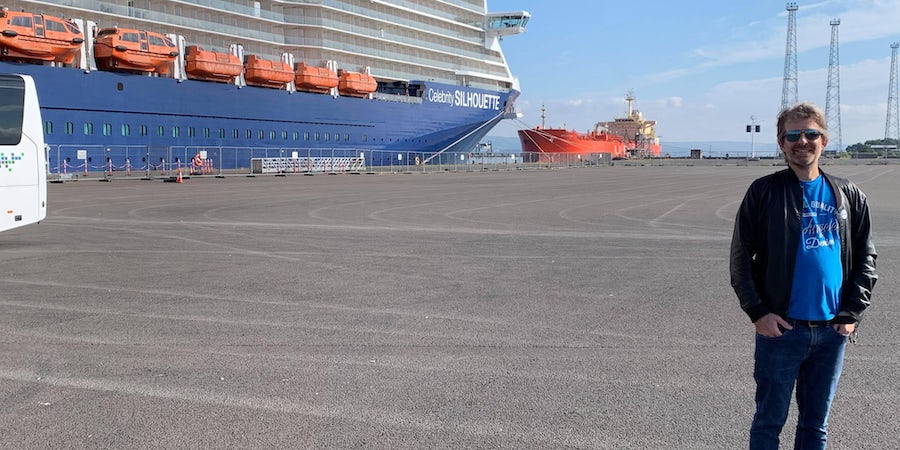 Back On Celebrity Silhouette: From March 2020 to the Ship's First UK Cruise

(6 p.m. BST) -- A little over 15 months ago, I stepped aboard Celebrity Silhouette for a nine-night Southern Caribbean cruise from Fort Lauderdale. The date was March 5, 2020.

The plan was to get a sneak peek at Silhouette's "revolutionised" interiors -- specifically The Retreat sundeck and lounge, the refurbished suites and Craft Social -- ahead of the ship's arrival in Southampton last April. Which I did, but I never got to show what we'd filmed.

I'd been watching the news, I'd heard of an illness in China called "coronavirus." I just assumed it would be contained there or within the region, like some other viruses that came before it.

And as we know, within those nine days the world changed.

The day before we were due to return, March 13, 2020, every major cruise line announced a pause in operations and every ship at sea was heading back to port. At the time we didn't even know if we'd be allowed to dock, as ships around the world were being turned away from ports.

We arrived back in Fort Lauderdale on March 15, 2020, and raced to get back to the UK before the borders closed.

I had no idea when I would see the ship again.

Fast forward to Southampton docks in July 2021, and here I am, about to board the last ship I sailed on pre-pandemic.

I fly through security (it helped that we were one of the last passengers to board) and pause to film on the gangway. Then I'm on. There's no fanfare, or any of the whoops and hollers that greeted the first to board a little after noon.

But I like that. It allows me to savour the moment and take in the feeling.

It's certainly stirred up a lot of emotions, not just for me, but for crew and passengers-- all of whom have been waiting patiently for this day.

The ship sets sail just past 5 p.m. BST on July 2, becoming the sixth Celebrity Cruises ship to return to the seas. Celebrity Millennium led the way, with North America's first major megaship launch on June 5, followed by Celebrity Apex in Greece. On June 26, Celebrity Edge became the first mega cruise ship to sail from a U.S. homeport. Flora restarted in the Galapagos over the weekend.

It's a mixture of joy and relief -- and a hope that the darkest days the industry has ever seen are now firmly behind us.

So what's the now not-so-newly "revolutionised" Celebrity Silhouette like?

Health & Safety at the Forefront

We're sailing just under 1,000 passengers, a third of the ship's capacity, as per government guidelines (though note, this is due to change to 50 percent of capacity, very soon).

And, as you'd expect, enhanced health protocols are right at the forefront of Celebrity's return to the seas.

Masks are required throughout the ship (and outside for crew) as is constant hand-sanitising -- and there's certainly no hugging. A fist bump seems to be the preferred method of greeting.

There's a crew testing center on the top deck, and all crew are fully vaxxed. Signage is everywhere ("Do Your Part, Stay Apart") -- lifts, the theatre, bars, restaurants and sun decks.

Capacity is limited in the Persian Garden, the line's thermal suite, and every other treadmill in the gym is switched off to allow for distancing.

Thumbs Up for the E-Muster

I first got an alert to complete my safety briefing on my phone on the train down to the ship, which I duly did, and which the ship picks up that you've done (you have to play the video).

Once I was onboard I went straight to my muster station, got checked in and had a little sticker put on my card. That's it.

As has been widely trailed, the self-serve buffet is no more. And neither are self-serve drinks. And as the ship has opted to open only a limited number of serving areas, crowds built up, especially at breakfast for eggs (it's an odd new system where one beleaguered server takes your order and your name, places it and then you hang around waiting for your name to be called out. The problem was multiple lines of people built up, unaware of the new system).

Again, as has been suggested, this could become a problem as numbers continue to build up, but whether they will go down the Carnival route in the U.S., or opt to stick with a served buffet, we will have to wait and see.

New bar Craft Social, which replaces Cellar Masters, is like an upmarket sports bar, with screens showing sports and a selection of bar food. But, whereas you could sit at the bar on my 2020 cruise, you can't on this cruise -- you order from your seat, or wave down a waiter.

However, at the Martini Bar, just across the landing, you can sit at the bar and chat to the barman, so it's slightly confusing what the policy is.

At restaurants, you can order via a QR code, but in all that we went to, you are given a paper, disposable menu.

And in the theater, you'll see physical distancing signs on every other block of two seats.

Ship-organised shore excursions are currently the only way to get off the ship. And these are strictly enforced. Our guide had to read us a long pre-amble from Celebrity explaining that we could not interact with other people or go wandering off on our own, or we could be denied boarding. We have to stay in our bubbles.

At the pace that England is reopening, it looks as if this could soon be dropped there. But every devolved nation has a different policy when it comes to easing COVID restrictions, and with the pace of vaccination in Ireland so far behind that of Northern Ireland, it looks as if bubbles will remain for some time to come in Belfast.

Being back on the ship brings back memories of spaces I remember being jam-packed, with people dancing at the silent disco or Qasar, two- or three-deep round the Martini Bar, filling every available deck chair around the pool, packed into the theatre for lectures.

Walking around these past few days -- people wearing masks, still giving a wide berth, hesitant to get into a lift lest they break capacity rules -- does ram home what a different age we are in compared to just 15 months ago.

But it won't be long before these restrictions are eased -- July 19 in England. Despite still living in the shadow of COVID, it didn't detract from people from having fun onboard -- there was still dancing, there was still that crazy Martini Bar glass pouring show. England won against Ukraine and we watched it on a stunning July evening on the top deck lawn.

Of course, we don't know what might happen tomorrow, let alone next week or next year. If there's one thing I've learnt about this industry -- its crew and its loyal cruisers -- is that it's resilient.

It's weathered a 15-month storm, and it's come out the other end – a bit battered, a bit bruised, but stronger and wiser -- and hopefully ready for whatever's round the corner.