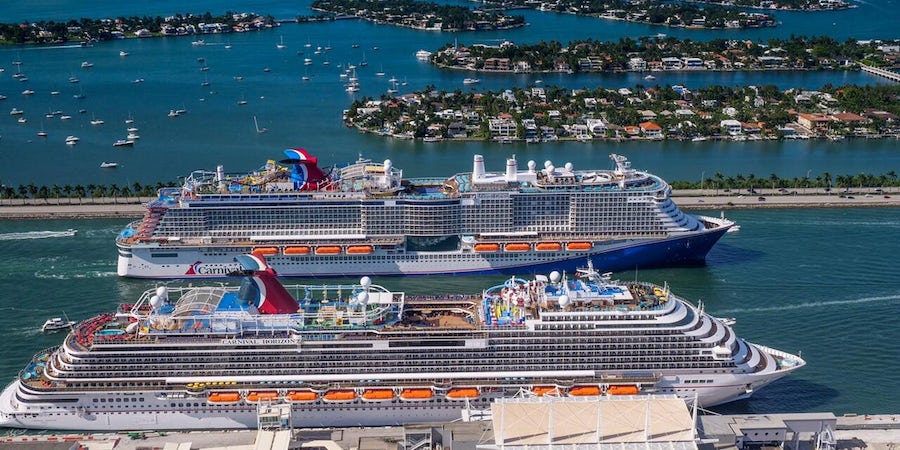 Live From Carnival Cruise Line: Guests Report On the First Two Sailings Back

(1:25 p.m. EDT) -- In the history of Carnival Cruise Line, this past weekend will go down as one of the most significant.

The popular cruise line returned two ships to the seas with paying passengers for the first time in nearly 16 months, with Carnival Vista departing Galveston, Texas on July 3, and sister-ship Carnival Horizon sailing out of PortMiami one day later, on July 4.

It marked the first restart for one of North America's most popular cruise brands since the global health pandemic shut down cruise, and travel, in March of 2020.

The excitement for the line's return to service was palpable, with posts on the sailings clogging social media channels as passengers provided up-to-the-minute descriptions of the events onboard and ashore.

Cruise Critic caught up with popular cruise YouTubers JJ Cruise onboard Carnival Horizon on Sunday evening. JJ Cruise -- the moniker of millennial couple Jordan Taylor and Jared Dailey -- have been sailing aboard numerous ships since cruising began to return in earnest in June, sharing their thoughts and assessments of each voyage through their Youtube channel.

For Carnival Vista cruisers, a Live From thread has also been started.

"We are trying to see the differences between each cruise line as they return to service," JJ Cruise told Cruise Critic from Carnival Horizon in an interview. "So far in 2021 we’ve sailed with Royal Caribbean and Celebrity. We knew based on popularity of the cruise community Carnival had to be next."

"The spirits of the passengers aboard the Carnival Horizon are flying high," said the duo. "Carnival has a very loyal fan base and you can tell that people on the ship aren’t only happy that cruising is back, but that Carnival cruises are back."

That tracks with what Cruise Critic members are saying.

"Everything is open as usual. No masks, no social distancing," said Clemson Cruiser, who is on the same cruise.

Not only are two of Carnival's ships back in operation, but the pair found things onboard to be pretty much as they were prior to the pandemic's emergence.

"Because this is a vaccinated ship (above 95 percent vaccinated), the changes onboard are minimal," said JJ Cruise. "There is little social distancing, no masks, and even mostly self-serve buffet stations."

Still Plenty to Love about Cruising

Prior to big-ship cruises re-entering service, there had been much gnashing of teeth over whether the experience would continue to be enjoyable in a post-pandemic world.

For Jared and Jordan, their enjoyment of cruises stems from a number of unique experiences onboard, and not merely a single thing.

"There is so much we love about cruising -- the entertainment, the incredible food, the crew," said JJ Cruise. "We love being back at sea because to us it feels like the greatest escape to adventure."

"We also love meeting other cruisers," said the couple. "Many of our best friends are those we’ve met on ships. It is really our favorite way to travel."

While health and safety protocols onboard may mandate some changes -- such as mandatory mask usage for nonvaccinated passengers and a bevy of testing requirements that can really kick up the cost for those who haven't had the jab -- cruises across the board are coming back feeling a lot like they used to.

"Overall, Carnival is coming back very similarly to how they left," remarks JJ Cruise. "We have heard this ship is around 70 percent full, and it feels like it. In comparison to other ships we’ve been on, a mostly-full cruise ship with little protocols feels like cruising as normal!"

One change that Clemson Cruiser dislikes is that passengers are being encouraged to use the Carnival app, as opposed to getting a Fun Times in their room. You can pick up a paper copy at guest services, he reports.

Some COVID-19-related changes though, were welcomed openly by JJ Cruise, including Carnival's new E-Muster program that is based upon a similar system and process devised by Royal Caribbean Group.

"The E-Muster program that Carnival decided to participate in is a great change," said JJ Cruise. "I actually feel better prepared in case of an emergency, and it cuts down on bottlenecks in tight spaces of the ship."

Rather than forcing passengers to assemble en-masse on the ship's crowded -- and often sweltering -- exterior boat deck, passengers are now able to check-in at their designated lifeboat muster station at any time between embarkation and sailing. Passengers then watch a video on their in-cabin televisions on muster procedures, and the vessel is cleared to sail.

For those who think they can shirk the new program, Heald had a few words of caution. He confirmed passengers will have their Sail & Sign cards frozen after two drinks at the bar, or two onboard purchases, with the card being re-activated only after they've checked-in at their muster station.

"Until you check in, you will not be allowed to use that card again," said Heald.

For passengers like JJ Cruise, the new muster program was a hit.

"Emulated was so easy!" Cruise Critic member skylane182 said. "Went right to room watched video and then went to muster area to check in. Very smooth. Guests have until sail time to complete. I loved this compared to the traditional muster,"

A Few Choppy Waters in Miami

Not everything was smooth sailing on Carnival's first cruise back from PortMiami in nearly 16 months.

"The check-in process was difficult," admits JJ Cruise. "Unlike other cruise lines, Carnival opted to allow anyone inside the terminal line regardless of their check-in time. Many of those with a later check-in time showed up hours early and were on the ship before those who came at their assigned time.

"Unfortunately, that left people who obeyed the check-in rules standing out in the sun for over an hour just to get inside. From car to ship we stood in several different lines for roughly two hours."

Embarkation has always been something of a contact sport. Pre-pandemic, it was not uncommon to see people arriving at nine in the morning for an afternoon embarkation. Timed slots, or appointments, for embarkation, were enforced at some ports and not others, leaving many passengers to just simply show up whenever they wanted in the hopes they could board early.

That process, at least on Carnival's sailings from Miami, seems to be in place. However, JJ Cruise cautions that passengers have to be prepared to be more understanding of hiccups than perhaps they were in the past, particularly with these first sailings.

"What we all have to remember, however, is that cruising is back, and we have to be patient as the cruise lines work out their processes to ensure a safe and speedy embarkation."

Over in Galveston, embarkation seemed easier on Carnival Vista.

"We boarded at 1:30 and it was a very smooth process," reported skylane182, adding that people at the terminal generally adhered to their scheduled time. "Yes masks are required until you step onto the ship. Crew is awesome and so welcoming. Lunch in Lido was self serve."

Member Kwakwa630 noted that you can tell that it's the first sailing back, in terms of organization, slow wi-fi and long waits between courses at dinner. Deck parties and other group events like Quest are not scheduled.

QR codes are being used in the dining room, "so you need to bring your phone to scan and see the menu," skylane182 added. Downloading the Carnival Hub app before your trip is a must.