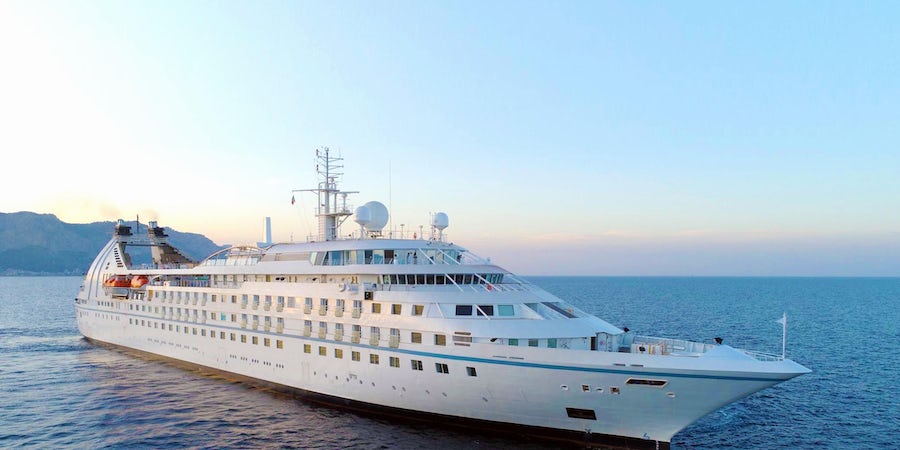 Live From Star Breeze: What is Better on the Reimagined Cruise Yacht

(9:33 a.m. EDT) -- Lounging in the pool on a sunny morning, Bloody Mary in hand, I was thinking about really good facelifts. It wasn’t the attractive fellow passengers sharing the water that had me thinking this way but the fact that even if you looked hard you would not be able to tell that Windstar Cruises' Star Breeze had been sliced in half, an entirely new 84-foot section added.

The extra space allows for the larger pool as well as two new eateries, an expanded spa and, most important to Windstar's bottom line, 50 new suites -- bringing the ship's occupancy up to 312. On its exterior, Star Breeze boasts a new sleek and more yacht-like profile.

The addition permits the casual upscale cruise line to do something unexpected: Get a bit more glamorous.

Star Breeze and its two sister yachts, Star Legend and Star Pride, are all in the 30-something age range. They sailed for ultraluxury line Seabourn and joined Windstar Cruises six years ago. Executives also followed from Seabourn. So perhaps it's not surprising a little Seabourn shows in the contemporary Star Breeze redo.

But don't worry, Windstar is sticking with casual -- Hawaiian shirts are still perfectly fine in the Amphora dining room at night. And the crew is as friendly and pampering as ever.

The other ships will also get a makeover as part of Windstar’s $250 million Star Plus Initiative.

The glass-fronted elevated pool is large enough to comfortably fit eight people. It replaces a tiny swim-against-the-waves pool that always seemed like wasted space. With its decorative waterfall feature, the new pool is the perfect place to cool off on a hot day at sea off St. Maarten -- especially when your ship, due to COVID-19 restrictions, has nowhere else to go on its inaugural sailing.

The sundeck is larger too, with cushy loungers on two levels. You'll want to spend most of your time here on a warm-weather itinerary. Try to snag one of the two sexy clamshell daybeds for two, the perfect place to cuddle while overlooking the sundeck and sea.

The added deck space is put to good use with a new outdoor buffet-style dining venue, Star Grill, under a shaded tarp across from the outdoor bar. Menus change twice a day and include a featured selection by barbecue guru and cookbook author Steve Raichlen -- dishes such as coffee-crusted prime brisket and bourbon brined turkey breast. There are choices for vegetarians too (though not by the meat-focused star chef). Don't expect to actually see a smoker or open grill. Prep is in a galley. Star Grill is open for lunch and dinner.

For me, the star of Star Breeze is the new 38-seat tapas restaurant Cuadro 44 by Anthony Sasso. I'm betting it will soon be on everyone’'s list of best restaurants at sea. Sasso is a 13-year veteran of the Michelin-starred Casa Mono & Bar Jamon in New York and it shows in his creative take on Spanish and Portuguese flavors.

The contemporary, relaxed decor has hints of Spain and you can see chefs finishing dishes in the open kitchen, such as small fried rice balls, which pop with the taste of paella, Jamon Iberico (24-month aged ham) shimmers on the plate and the charred Portuguese octopus will have you smacking your lips.

And that’s before you get to the big plates -- creations such as confit chicken leg with chorizo and black mussels, a whole new take on surf and turf. Save room for the excellent churros with chocolate sauce!

There's no extra charge for the reservations-required experience. There are only 34 seats but if you can snag a second reservation in your cruise week go for it.

Asked his favorite part of the redo, Windstar President Chris Prelog said it's the World Spa by Windstar (operated by OneSpaWorld). Now a walk-through space on Deck 7, the spa boasts both an expanded ocean view fitness center and a Motion Studio for classes.

A relaxation area has heated ceramic loungers, which you may want to snooze in before or after you do a sauna or steam (all complimentary). A massage in one of the four small treatment rooms caused me to lose sense of place and time.

The contemporary, sea-inspired tones and furnishings of the suites add a welcome level of sophistication -- though choose your space wisely as there are "old" suites and "new" suites, in various configurations and color schemes (11 options in total). Most are 277 square feet.

The suites in the new block feel particularly spacious thanks in part to the light decor and clever design -- which includes a contemporary Venetian-stained mirror that double as an artwork and glass sliders that lead to a step-out French balcony. You enter a living area, your bed closer to the views, a reversal of the previous configuration. A dozen of the suites have sofa beds for additional guests, curtains used to separate the space.

While there are still some suites with bathtubs, the new suites have tiled walk-in showers. Another welcome addition is plugs and USB outlets, located both at the vanity and near the bed, and an interactive flat screen TV on which you can check out the daily program, watch hundreds of movies, and order room service 24 hours a day. I appreciated the niceties such as upgraded Egyptian cotton bedding and fresh flowers.

For those who love traditional cruising, 10 new suites on Deck 3 have portholes (they occupy the space that was previously the Amphora restaurant). The ship's new block also allowed for two new mid-ship Owner’s Suites that can combine with adjoining suites for a three-bedroom, three-bath (plus guest bath), 1,374-square-foot spread.

With 100 additional passengers expected onboard, public spaces needed to be expanded. Amphora was moved to the new block, and now has a glass wine wall, new lighting, mirrors and other tweaks that make it feel lighter and airier.

I love the addition of a coffee bar for espresso drinks at the reconfigured Veranda buffet -- which also has new indoor ocean-view seating in two step-down wings. (Though no additional outdoor seating.)

Entertainment has been expanded to better disperse a larger crowd – with a duo, five-piece band and entertainment director. The band was excellent, the attempt at cabaret shows in the theater a bit lacking, though the piano player did a decent Elton John impersonation.

The underused casino and library were removed in the redo to allow for more space in the Compass Rose lounge, where the same piano player takes requests from the late-night crowd.

And warning: The additional space was also used to create an expansive Star Boutique, operated by parent company Xanterra, and with watches, jewelry, new Windstar logo-wear and many other temptations.

All in all, the changes are attractive, smart and appealing, both for Windstar fans and newbies looking for upscale, casual cruising with added oomph. You'll eat better (Cuadro 44 ups Windstar's already great food factor), sleep better and have more space to play.