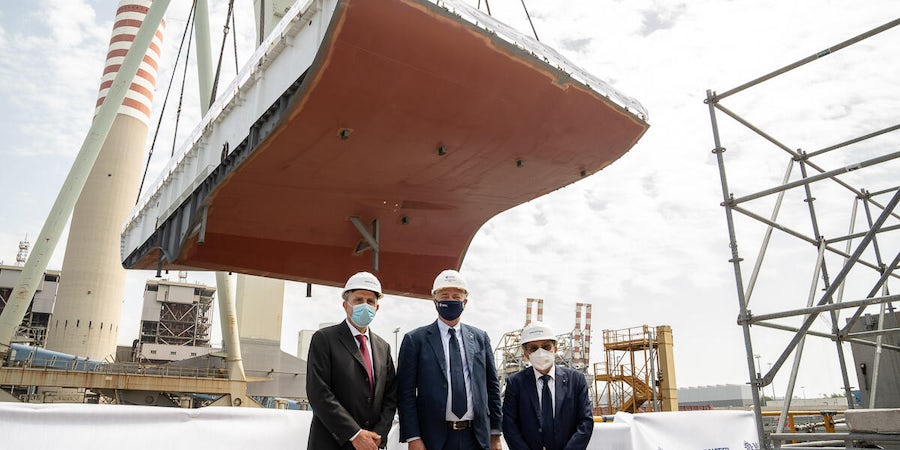 The line held a traditional coin ceremony to mark the laying of the ship's keel at the Fincantieri shipyard in Monfalcone, Italy, where MSC Seascape is currently under construction. Two coins were placed within the ship's keel as a sign of blessing and good fortune for the ship's career at sea.

Like sister-ship MSC Seashore (set to debut later this year), MSC Seascape is part of MSC's Seaside EVO class that is built on the same basic platform as MSC Seaside and MSC Seaview.

"The coins we lay today, to mark a key construction milestone of one of our ships, are an important symbol of our confidence in the cruise industry and the future of travel and tourism," said Pierfrancesco Vago, executive chairman of MSC Cruises.

"When she joins our fleet, MSC Seascape will generate meaningful economic impact not only for the shipbuilding industry and its entire supply chain but for all the ports and destinations that she reaches, strengthening coastal tourism and supporting the vital economic recovery of local communities."

MSC Seascape will have several unique modifications, according to MSC. Sixty-five percent of the ship's public venues have been re-imagined compared with MSC Seaside, encompassing 11 dining venues, 19 bars and lounges, and plenty of open deck space adorned with six swimming pools.

The MSC Yacht Club -- MSC's luxury ship-within-a-ship concept -- will be the largest in the line's fleet, with over 32,000 square feet of space dedicated to this top-of-the-line area.

MSC Seascape is the second of three Seaside EVO ships currently on order with Fincantieri. The third and final vessel has not yet been named.