You may also like
Dismiss
EU Releases Health Guidelines for Cruises: Masks, Social Distancing, No Indoor Pools
Live From Variety Cruises' Galileo: The First Eastern Mediterranean Cruise in COVID Era
Live From CroisiEurope: The First River Cruise Line to Resume Sailings With a Multi-National Passenger Mix Onboard
Testing Cruise Ships' COVID-19 Health Protocols: Costa vs. MSC
Live From SeaDream: What It's Like To Be a Passenger On the Only Transatlantic Cruise Sailing
SeaDream Yacht Club Cuts Short First Caribbean Cruise Back
Live from SeaDream: When Your Caribbean Cruise Has a COVID-19 Case
Cruising the Newest Ship Afloat: Live From Celebrity Apex
Live from Viking Sky in Iceland: What Is It Like Onboard?
Live From Marella Discovery in the Aegean: What It's Like Onboard One of the First UK Cruise Ships Sailing Internationally 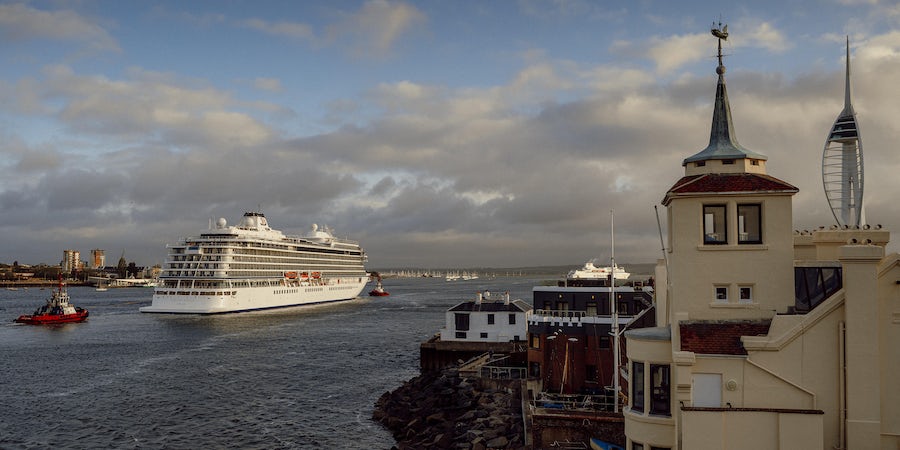 (Noon EDT) -- Viking was the second cruise line to resume sailing in the U.K. on May 22 with a series of coastal itineraries that all feature ports of call.

The 930-passenger Viking Venus is the latest in the line's near-identical ocean fleet and the first vessel to be named in the U.K. in a ceremony performed last month by TV presenter Anne Diamond who is the ship's godmother.

Due to the current U.K. government restrictions on numbers we are onboard with just 360 fellow passengers and a full complement of crew.

Here's our take on what it's like to sail with Viking post-pandemic.

Viking is an adult-only line and the sailings are only open to vaccinated U.K. residents. Along with loyal Viking repeat cruisers, some of whom have sailed on the line's river and ocean ships, we are meeting a surprisingly large number of shipmates who have never cruised before. They tell us they were eager to get away and saw a cruise as stress-free option to travelling on dry land in the U.K. and having to find accommodation and places to eat in busy resorts. One thing they all share in common is a delight to be travelling again -- a view echoed by the ever-smiling crew members who have given us the warmest welcome and said they are so happy to be working again.

There Is A Lot Of Testing Going On

Viking's health protocols are comprehensive and really impressive and the line was the first to install a full-scale PCR laboratory at sea. Each day all passengers (and crew) have to complete a non-invasive saliva test which involves spitting into a glass tube and sealing it up ready for the room steward to collect and take to the lab for testing. It dominated conversation on embarkation day but we have quickly got used to it. Helpful hint: it's easiest to do it first thing in the morning when you get up as you have to do it before you clean your teeth or have anything to eat or drink.

Elsewhere, the Covid safety measures are slickly implemented and don't feel overly onerous. We've all got used to wearing masks by now so it doesn't feel restrictive to have to wear them whilst walking around on the ship. Extra masks, hand sanitiser and wipes are provided in the cabin. Temperature checks are conducted daily -- which involves standing in front of a clever facial recognition machine at the entrance of the two main restaurants and in guest services -- and temperatures are taken on return from shore excursions.

Furthermore, all passengers are given a contact tracing device on embarkation, which can be worn on a lanyard or carried, and have to keep it on them at all times (aside from the pool or spa's thermal suite). The device does not track personal information or collect GPS location data and would only come into play in the event of a case of COVID-19 when it would be used to determine if passengers had been exposed to the risk.

Viking Venus has a purified air system, like ones used in hospitals, and each cabin has "fresh" external air that is not shared with other staterooms or public spaces. There are also enhanced cleaning and sanitisation procedures.

Social distancing is practised throughout the ship, with seats blocked out in public areas, but with so few people aboard what is already a spacious vessel it's easy to keep your distance.

The most significant onboard change is in the World Cafe, the ship's buffet restaurant, which is no longer self-service. There are glass screens in front of the food that is served by staff behind the counter. It works perfectly well and -- in time honoured buffet style -- you can go up as often as you want!

A few things are closed, such as the novel snow grotto in the spa, and numbers are restricted in the pools and hot tubs. Passengers are also requested to book a time to go into the thermal suite as no more than six people are allowed in at any one time, but this didn't seem to cause any issues and we haven't heard of anyone not being able to get in. Similarly, you are also asked to book a time to visit the gym and, in theory, not spend more than 45 minutes working out. However, the gym isn't overly busy so you can spend as long as you want there provided it doesn't overlap with passengers who have a pre-booked time slot, which hasn't happened yet.

In the Torshavn night spot the dance floor has been filled with tables and chairs to stop the temptation of getting up and dancing to the live bands and only six people are allowed into the onboard shops at any one time.

This is an area where the COVID-19 measures have the most impact. You can only disembark for shore excursions which are conducted in a bubble and you have to stay with the group all the time. One of Viking's USPs is that it offers more time in port than many other lines -- with ships usually arriving first thing in the morning and leaving at night -- so it is frustrating not to be able to make the most of this free time to wander off on your own in lively cities such as Liverpool where there are fantastic free museums and attractions close by on the waterfront. But a chain is only as strong as its weakest link so we totally appreciate the line doesn't want to take any risks that might jeopardise its rigorous policies to keep passengers and crew members safe.

Conversely, you certainly don't feel as if you are being cooped up onboard with nowhere to go. Whilst some lines are running coastal sailings with no stops there are four ports of call on our weeklong sailing. Even though passenger numbers are limited Viking has not cut back on the shore tour offering, including its trademark free excursion in every destination. Additionally, there are up to six for-fee trips to choose from at each stop, including insightful "privileged access" tours exclusive to Viking and often with extra special touches. For example, on the trip to Knowsley Hall, one of northern England's grandest estates and home of the Stanley family since 1385, we were greeted by Lord Derby himself.

The Plant-based Offering Has Really Grown

One thing we've really noticed this week is how much the vegetarian and vegan food options have increased since we were last onboard. In the past it was particularly an issue in the Chef's Table, one of the two speciality restaurants included in the fare, as the set tasting menu didn't have a veggie option, which meant people missed out on a first-rate food and wine pairing experience. Now there are plant-based options for each course which even resulted in some of the carnivores on our table having a touch of food envy. Vegetarian and vegan options are available in all the other dining venues, and on the room service menu, along with milk alternatives.

Conclusion: We Feel Secure And Spoilt

Viking isn't in the business of operating big glitzy ships with lots of hustle and bustle so even though there are fewer passengers there's no noticeable difference in the tranquil onboard vibe. The extent of the health protocols is very reassuring and we all feel very safe. The line is already known for good service and with so many crew members looking after a ship running at less than half normal capacity we feel very spoiled. A passenger we met at the Portsmouth check-in said: "After all this time I am so looking forward to someone else doing the cooking and making my bed." Viking has certainly done that, and more.