You may also like
Dismiss
Hurricane Lorena in the Pacific Ocean Causes Cruise Ship Itinerary Changes
Coronavirus: Updated Cruise Ship Policies and Cancellations Because of COVID-19 (2021)
Hurtigruten Ramps Up Return to Cruising With Most of the Fleet in Service by September
Marella Cruises Reveals New 2021/22 Itineraries to the US, Caribbean and Asia
Royal Caribbean's Anthem of the Seas Cruise Ship to be Based in Southampton in 2021
Live From Celebrity Edge: A Cruise That Seems Normal Again; "I'm So Hopeful"
P&O Cruises Restarts Cruising For First Time in 15 Months on Britannia
MSC Cruises Extends Seasons of MSC Virtuosa Cruise Ship in the UK, MSC Bellissima in Dubai
The Biggest Cruise Ship in the World, Wonder of the Seas, Has Arrived in Florida
Royal Caribbean Hints At 7th Oasis-Class Cruise Ship 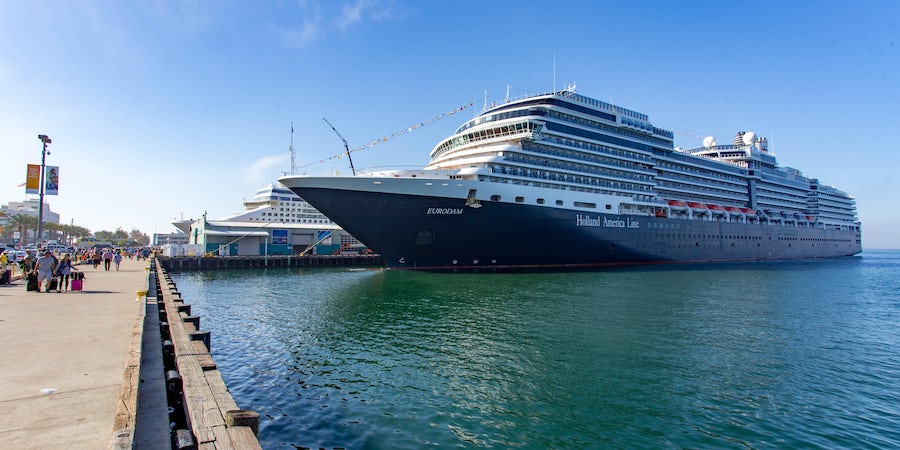 (2:35 p.m. EDT)-- Holland America Line is continuing its American restart with sailings from San Diego on two ships beginning in September, and four ships to the Caribbean from Fort Lauderdale starting in October and November.

All sailings are for passengers who have received their final dose of an approved COVID-19 vaccine at least 14 days before the cruise embarkation date. Proof of vaccination will be required at check-in.

Holland America will deploy both Koningsdam and Zuiderdam from San Diego, sailing 40 cruises between them, for a season that runs from September 18, 2021 through April 22, 2022.

Zuiderdam kicks things off on September 19, with 17 cruises that include the Mexican Riviera, the California coast, Hawaii and the Panama Canal.

Koningsdam follows on October 10, with 23 sailings in the Mexican Riviera, the California coast and Hawaii.

The California coast itineraries are ones that often book up the fastest, as the season is limited. HAL has a new seven-day itinerary that calls at Catalina Island, Santa Barbara and a late-night stay in San Francisco, along with a stop in Ensenada, Mexico.

On the East Coast, Holland America's Caribbean restart will begin from Fort Lauderdale aboard Nieuw Amsterdam on October 23, 2021. Other ships, with their start dates, include HAL's newest ship, Rotterdam, on November 3; Eurodam on November 14 and Nieuw Statendam on November 21.

These Caribbean itineraries range from four to 14 days, stopping at various ports in the Eastern and Western Caribbean. All sailings will feature a stop at HAL's private island, Half Moon Cay.

Before Nieuw Amsterdam reaches Fort Lauderdale, it will sail a new 21-day itinerary from Seattle, departing on October 2 at the conclusion of its Alaskan season. The cruise includes stops in San Diego; Puerto Vallarta; Panama City; Aruba and Half Moon Cay.

Before these fall cruises take place, HAL will have begun its U.S. restart in Alaska. Nieuw Amsterdam is taking center stage here, too, with an itinerary that includes calls at Juneau, Icy Strait Point, Sitka and Ketchikan, with scenic cruising through Glacier Bay and Stephens Passage.

Those cruises begin on July 24 and operate through October 2.