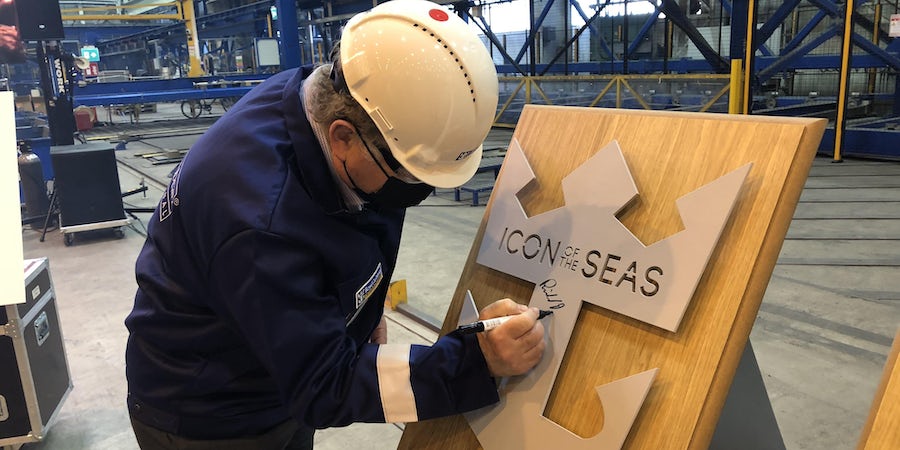 The first steel was cut for Icon of the Seas, the line's first ship to be powered by Liquefied Natural Gas, on June 14.

Icon of the Seas -- the first of three planned Icon Class newbuilds -- will debut in fall 2023. It will be the first entirely new class of ship built for Royal Caribbean since the Quantum Class debuted in 2014.

Liquefied Natural Gas, or LNG, is cleaner-burning than traditional marine diesel oil. So far, only a few cruise ships have been powered by LNG technology, including Carnival's Mardi Gras and Costa's Costa Smeralda. More vessels, however, are planned to be operated with LNG in the future.

"We made our commitment to making clean power at sea a reality -- and soon the norm -- when Icon Class was first announced in 2016, and we’re excited to see construction underway on what will truly be a ship unlike any other,” said Michael Bayley, president and CEO of Royal Caribbean International. “Our decades of work in ocean conservation, energy efficiency and continuous improvement will be evident all throughout Icon. We look forward to revealing more of the game-changing features our guests and crew have in store as she begins to take shape."

Bayley, Chairman and CEO Richard Fain, and Tim Meyer, CEO of Meyer Turku, were present for the steel-cutting ceremony on Monday.

Little is currently known about the Icon Class ships -- not even a rough rendering of the vessel has been released. They will, however, be around 200,000 gross tons, and will carry roughly 5,600 passengers when they debut.

The Icon Class vessels will be the second-largest in the Royal Caribbean fleet, coming in just slightly smaller than the company's Oasis Class ships.