You may also like
Dismiss
Windstar Cruises Begins Ambitious Three Ship “Stretching” Renovation Program In Italy
Windstar Becomes Latest Cruise Line to Require COVID-19 Vaccine For Sailing
U.S. Ports, Cruise Lines Step Up Crew COVID-19 Vaccines
Celebrity Lowers Vaccine Age Requirement, Independent Shore Excursions Allowed
What it's Like to Sail on a Cruise Ship After 2 COVID Cases are Discovered
Live From Windstar Star Breeze: A Cruise to Nowhere in the Caribbean
Celebrity Edge Will Make First Cruise Ship Sailing From the U.S. This Weekend, CDC Cleared
Live From Star Breeze: What is Better on the Reimagined Cruise Yacht
Live From Viking in Iceland: Dealing with a COVID Case on a Cruise 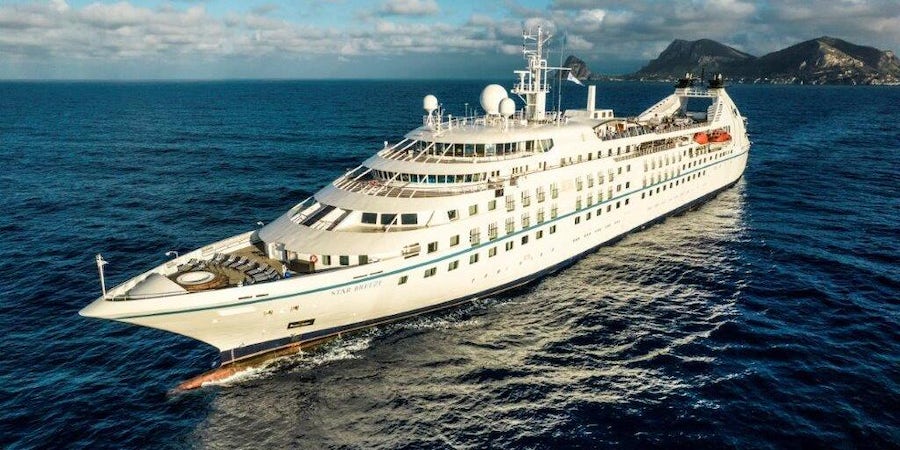 Windstar Cruises Restart Catch: Crew Is Not Yet Vaccinated, Ship May Have Nowhere to Go

However, the ship may have nowhere to go as fewer than 20 percent of the 178 crew members onboard have received COVID-19 vaccines, and as a result Caribbean islands are turning the ship away.

The cruise line faced an unanticipated challenge in getting vaccines in the Caribbean, Windstar President Christopher Prelog told Cruise Critic. But the crew have been isolated together for a month, and are undergoing weekly COVID-19 testing, he added.

The crew joined the ship at Fincantieri’s Palermo shipyard, where Star Breeze underwent an extensive redo including being cut in half so a new 84-foot midsection could be added.

In March, Windstar announced that all guests would be required to be fully vaccinated, joining a growing list of cruise lines around the world. The line also insisted that passengers undergo pier side testing and that ships would operate with mask and social distancing protocols in place. Both passengers and crew will be required to wear masks while onboard.

The line said crew members would be required to get the vaccine, as soon as it is available to them. At the time, Prelog said: "Vaccination is another layer of safety for all of us, and it's the responsible course of action as our yachts resume cruising and our guests travel the world."

Windstar is searching for vaccines for the St. Maarten crew. "We are working with the local authorities and the islands in procuring vaccine, and have been for the last few weeks, diligently involved on how to get it to the ship and so on," Prelog said. The line had no problem getting 100 percent of crew vaccinated for its Greece restart, also on Saturday, and its Tahiti restart next month, Prelog noted.

St. Maarten is insisting all passengers be fully vaccinated as well as proof of a negative PCR test. And to enter St. Maarten, you also have to fill out an application outlining your health conditions and travel plans, as well as upload copies of you PCR tests and vaccine cards.

Windstar will be able to operate Star Breeze safely without vaccinated crew, Prelog stated. "The group who comes onboard is vaccinated. The group who is onboard has been isolated. We are running all these protocols. It's probably safer than anywhere else you can be because you’ve got this controlled environment."

Prelog said the bigger problem is that without vaccinated crew, places such as the British Virgin Islands won't take the ship.

Windstar began calling 94 guests booked on the inaugural on Tuesday, with word that without vaccinated crew the ship won’t be able to make port calls in the British Virgin Islands, based on local health codes, and may not be able to call on other islands either. The original itinerary called for several stops in the B.V.I. as well as calls on St. Barth's and Anguilla -- all visits restricted to ship-sponsored shore excursions.

The line is offering guests booked on Star Breeze inaugural both a refund and opportunity to do the sailing for free, saying the new itinerary will focus on coves in and around St. Maarten and make use of the ship’s watersports platform for swimming, paddle boarding and other activities. Port calls may be added if any islands agree to take the ship, Prelog said.

"We really want to show off the ship. We can do it maybe better now because it's more condensed. It’s focused on Star Breeze being the main star, and we’ll do really well with it," he added.

Even if the line procures vaccines this week it will take weeks, while the vaccines take effect, for the crew to be fully vaccinated. It was unclear whether the lack of crew vaccinations would impact future sailings. Prelog said only the inaugural had been affected so far.

In addition to the inaugural sailing embarking on Saturday, Windstar hosted 90 invited guests onboard Star Breeze this week on a shakedown cruise.