You may also like
Dismiss
Coronavirus: Updated Cruise Ship Policies and Cancellations Because of COVID-19 (2021)
P&O Cruises to Sell Oceana, Ship to Leave Fleet This Month
Rolling Out the Deals: Why Now Might Be a Great Time to Book a Cruise
Costa Cruises Becomes First Carnival Corp. Brand to Restart Cruising
Wave Season Cruise Deals 2021
Out to Sea: Keeping Tabs on the Global Cruise Fleet
Another Big Week for Cruising in England as More Ships Set Sail, Arrive For Restart
Norwegian Breakaway Cruise Ship Returns To New York: We Chat With NCL President Harry Sommer
Additional Cruise Lines Opt To Require COVID-19 Boosters 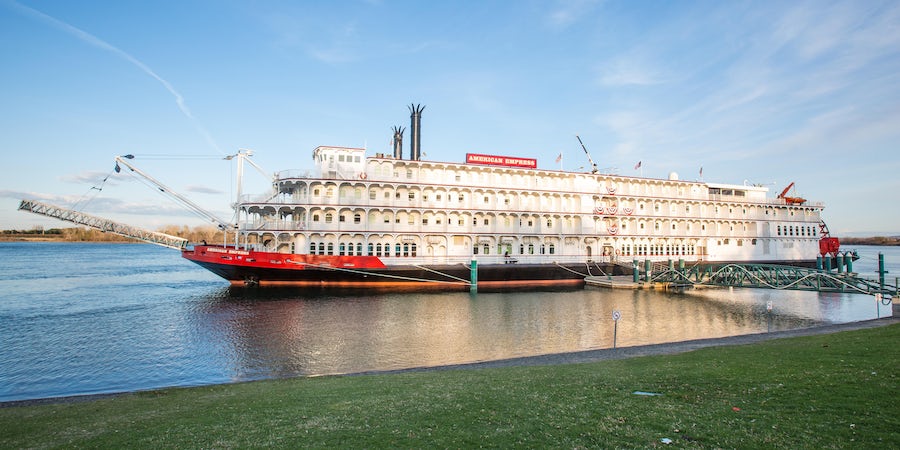 (10:40 a.m. EDT) -- American Queen Steamboat Company (AQSC) has resumed its operations on the Columbia and Snake Rivers for the first time in nearly 20 months -- for fully vaccinated travellers.

The line announced Monday the classically-inspired American Empress would set out today on its first sailing from Vancouver, Washington (across the river from Portland, Oregon) to Spokane (Clarkston), Washington.

AQSC successfully restarted operations on the Mississippi River in March aboard the brand-new American Countess, and Cruise Critic was onboard for the occasion.

Today, American Empress becomes the first ship to resume service on the Columbia and Snake rivers, as well as the first ship in the region to set sail carrying a fully vaccinated mandate for all passengers and crew.

"Our last voyage [on the Columbia and Snake Rivers] was in November of 2019," Shawn Bierdz, President of American Queen Steamboat Company, told Cruise Critic in an interview. "It's been twenty months since we started up…which is amazing when you think about it."

Sailings onboard American Empress's 2021 season in the Pacific Northwest -- which is almost entirely sold out, according to the line -- are open for reservation for passengers of any nationality that have been fully vaccinated with all required doses of a COVID-19 vaccine approved by the FDA or WHO.

AQSC says all crew are vaccinated onboard American Empress, as well. A fleetwide, 100 percent vaccination strategy goes into effect as of the company's July 1, 2021 departures (previous departures recommended full vaccination against COVID-19, along with PCR testing).

Even with the mandate for vaccines, AQSC is having no difficulty in selling American Empress' return to the rivers.

"Of all of our vessels, American Empress is probably the most sold-out," explains Bierdz. "About 13 out of 20 sailings are sold-out. So, it's a very high demand product."

The ship operates voyages along the historic waterways that call on some of the region's most unique ports of call, including Astoria, Oregon; The Dalles; and Stevenson, Washington.

American Empress is large enough to fall under restrictions on cruise set forth by the U.S. Centers for Disease Control and Prevention. By adhering to a full vaccination mandate, the company is able to resume sailings on the Columbia and Snake rivers without the need for test cruises, but while still offering more space onboard by introducing capacity constraints to ensure no sailing goes out at 100 percent capacity.

"It's capacity-constrained," Bierdz said. "We're still under the CDC's Conditional Sail Order so we're operating at 229 souls onboard, which includes guests and crew…it's probably about 70 percent of the vessel's capacity."

American Queen's founder and CEO, John Waggoner, had told Cruise Critic earlier this year that he believed fully vaccinated cruises were the way forward to an industry restart. Because American Empress carries a full vaccine mandate, there is no need for the vessel to conduct the simulated voyages being required of operators not mandating full vaccination of passengers and crew.