You may also like
Dismiss
Coronavirus: Updated Cruise Ship Policies and Cancellations Because of COVID-19 (2021)
Norwegian, Royal Caribbean Team Up To Create Cruise Health and Safety Protocols
In Industry Step Forward, CDC Seeks Public Comment On Cruise Resumption
What Happens to Cruise Ships During the Pandemic's Hurricane Season?
Rolling Out the Deals: Why Now Might Be a Great Time to Book a Cruise
Live From MSC Cruises' MSC Grandiosa: What's it Like Sailing on a Big Ship in the COVID Era?
Costa Cruises Becomes First Carnival Corp. Brand to Restart Cruising
Allure of the Seas Cruise Ship to Make Oasis-Class Debut in Galveston
Another Big Week for Cruising in England as More Ships Set Sail, Arrive For Restart
Just Back From Allure of The Seas' Maiden Galveston Sailing: Hits and Misses 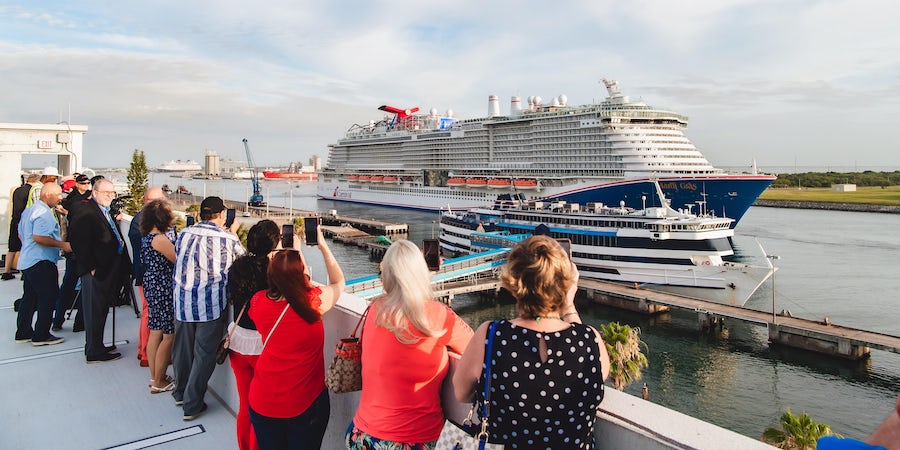 (1 p.m. EDT) -- Carnival Cruise Lines has welcomed its most hotly-anticipated new ship to its first U.S. homeport since being delayed by the ongoing global health pandemic.

Anticipation of Carnival's new Mardi Gras -- the line's first Excellence Class ship and the first in the fleet to be powered by Liquefied Natural Gas -- was so high that Port Canaveral authorities released detailed plans for the vessel's arrival, outlining viewing areas for the public to congregate in.

"We have been waiting for the Mardi Gras to come home for some time, and we know that there is a tremendous public interest to watch her arrival at the Port," said Port CEO Capt. John Murray.

Mardi Gras docked alongside at the new Cruise Terminal 3 at Port Canaveral after passing Jetty Park and entering the Middle Turning Basin for final alignment with Terminal 3.

Home to a brand-new design of atrium and the first roller coaster at sea, Mardi Gras was set to debut in 2020 before being delayed by the ongoing COVID-19 health pandemic. The 5,282-passenger ship will operate cruises from Port Canaveral to the Caribbean and the Bahamas once it officially enters service later this year.

Mardi Gras wasn't the only new arrival in Port Canaveral this morning. Royal Caribbean's Odyssey of the Seas also made its maiden debut stateside after crossing the Atlantic Ocean following the cancellation of its season of sailings from Israel.