You may also like
Dismiss
Live From Variety Cruises' Galileo: The First Eastern Mediterranean Cruise in COVID Era
Rapid COVID-19 Testing Likely to Be Part of Resumption of Cruising
Just Back From Quantum of the Seas in Singapore: COVID Changes That Worked -- And Those That Didn't
Live From MSC Virtuosa: Back on a Big New Cruise Ship For the First Time
Back On Celebrity Silhouette: From March 2020 to the Ship's First UK Cruise
Live From Norwegian Jade: What It's Like On The First NCL Cruise Back in 16 Months
Just Back From Norwegian Jade: Hits & Misses From the First Cruise Back
MSC Cruises Extends Seasons of MSC Virtuosa Cruise Ship in the UK, MSC Bellissima in Dubai
Guernsey Set to Welcome First Cruise Ship After More Than Two-Year Break 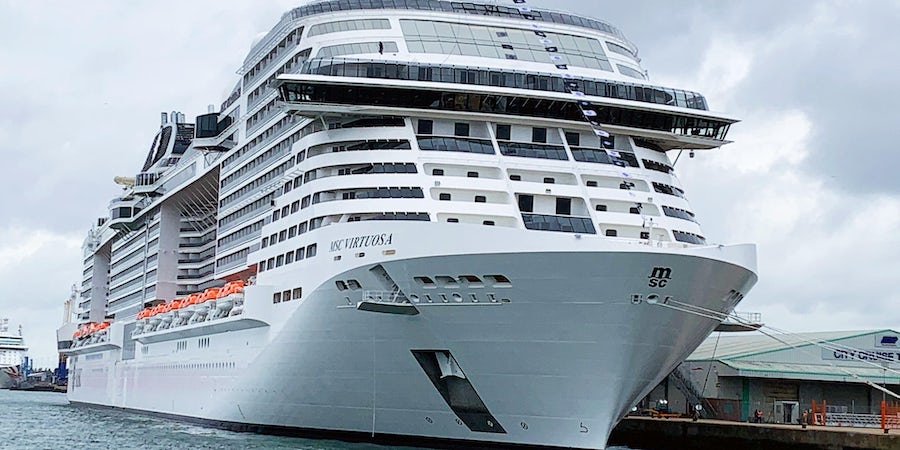 Just Back From MSC Virtuosa: Hits & Misses Of Being Back

When I stepped off Celebrity Silhouette in Port Everglades in March 2020, the pandemic had not yet been classified as such. I assumed this was a blip, that I'd be back cruising in a matter of weeks or months at most.

After all, every other outbreak in recent memory -- SARS, Ebola, Zika -- were all largely contained in their host country or region. At the time, it seemed like an over-reaction.

How wrong I was.

During those long months with cruise paused and little or no movement in terms of getting ships back sailing, I admit there were times when I really did fear for the future of the industry.

Then in August 2020, MSC restarted round-Italy cruises on a big ship successfully with comprehensive health and safety protocols, giving everyone hope that cruises could return safely (Costa followed suit soon after).

Many of those same protocols were carried over onto MSC's brand new ship, MSC Virtuosa, as it set sail from Southampton last week.

I was lucky enough to be invited onboard (you can read all about that experience here) for the inaugural four-day cruise.

How do MSC's pandemic-era precautions work, now that more people are vaccinated and life is beginning to return to normal? Here are our key takeaways from the first sailing.

There was a lot of concern last year when Royal Caribbean announced the end of the self-serve buffet (some Cruise Critic members even said: "No buffet. No more cruising for us" -- which did seem a bit extreme).

But the idea of a served buffet is not unique -- Holland America line introduced it on Koningsdam and it works very well.

It also worked fine on Virtuosa and has the added advantage of preventing food wastage (hands up who has piled their plate up with too much food on the first day, then left most of it? We know we have).

It's very simple -- as you enter a waiter hands you a tray and a knife and fork wrapped in a napkin and you simply walk along the glass fronted displays, point to what you want and the server loads the plate and hands it over the top to you. Exactly the same with the tea, coffee, juice and water stations -- ask for what you want and you are served.

Remember before COVID-19, the big fear was norovirus, which was primarily passed on by people not washing their hands and then touching food? Having a served buffet eliminates that concern as well.

The only pressure point we predict is when the ship sails full. Inevitably it takes longer to be served, so there may be delays as the ship starts to get more crowded.

MSC is not messing around when it comes to your health and safety, which is no surprise given that there is a lot riding on the successful resumption of cruising.

As Hotel Manager Alistair Burnett puts it: "It's a belt and braces approach".

"We understand that a ship is a slightly more intensive environment, you've got a lot of people, so we are extra cautious," he explains.

"Those things that people might not now think are imperative at home, we want to keep those extra conditions in place….we know these protocols work -- MSC Grandiosa has been sailing successfully since last August with tens of thousands of guests."

Although MSC is one of very few lines not insisting everyone is vaccinated onboard, they do everything to ensure a safe environment, even before you get onboard.

The line tests you just before you board, as well as require proof of double vaccination or a negative test.

Onboard, you experience all the stuff we've come to expect on land in the UK, such as mandatory mask wearing in public spaces, social distancing, enhanced cleaning and hand sanitising. The line has also installed at state-of-the-art air filtration system so it's 100 percent pure air inside (before, it was often recycled).

The line also provides fresh masks in your cabin every day, reinforces the message with frequent shipboard announcements and has the protocols beamed onto the big screen by the pool throughout the day.

And it works -- I did not see a single person not wearing a mask where they should be wearing one.

MSC cruises is known for throwing big parties, so the question is with a 6,200-passenger ship sailing with just 1,000 people -- can they still have that party atmosphere?

Well from the short time we had onboard, the answer is a resounding yes, as the cruise director explained: "The vibe is very positive. I noticed the people are very enthusiastic about it. I didn't notice at all a decrease in numbers, but I noticed a huge increase in enthusiasm."

What the line is doing is quite clever -- offering different entertainment around the ship at the same time, so people don't all congregate for example in the main promenade, where many of the line's biggest parties take place.

For example, on most evenings you will find as many as four events taking place simultaneously -- a stand-up comedian, a Motown tribute act, the main show in the main theater and a theme night in the Galleria. And there are of course numerous entertainment options such as the Games Arcade with a 4D cinema where you can shoot zombies; two simulated F1 cars, two bowling alleys and a VR walk-through. Or you can always make your own -- we were pleasantly surprised that karaoke is back!

MSC has ended all its name chef partnerships, except with master chocolatier Jean Phillipe Maury. So gone is Hola! Tapas, the venture with Ramon Freixa, and instead we have the artfully renamed Hola! Tacos, which as you can guess is Mexican rather than Spanish, It will be rolled out the sister ships.

The décor is authentic and atmospheric with flags and sombreros; food is delicious (albeit somewhat overpriced at £11.99 for a burrito) and there is even Mezcal tasting.

But the standout new restaurant for me was Indochine, a beautifully-designed French-Vietnamese restaurant nestled in the existing French bistro concept, L'Atelier.

A lot of thought has gone into this, with colonial-era paintings on the wall, glass chandeliers and an outstanding menu. Although it is meant to be fusion, the emphasis here is really on Vietnamese, with spring rolls, tom yam soup and pork belly all stand-out dishes.

It's pricey, but it's absolutely worth it for a splurge.

Butcher's Cut and Kaito Sushi and Teppanyaki are two of our favourite restaurants at sea. In fact, I spent much of lockdown dreaming about a steak and a Malbec in the former, and being charmed and delighted by Christopher, the Teppanyaki master, in the latter.

We experienced both onboard. The moment when I took my first bite of rump steak and first sip of Malbec, while bobbing about somewhere in the English Channel, it finally hit me that I was back on a ship -- and it wasn't just a dream.

We have no insight whether the contact tracing on our personal Fitbit-like device was put into use, but we did like its additional uses as a cabin door opener and bill payment device.

Zoe, however, the much-trumpeted in-cabin AI assistant, seemed to have fallen asleep and I couldn't get her working (apart from as a speaker).

We love the MSC for Me app -- intuitive and simple, it was perfect for booking the theatre, the restaurants, spa treatments and for keeping track of your bill.

Gone are the menus (unless you ask specifically for one), replaced by QR codes on tables. And there is something odd about seeing everyone heads down scanning their mobile phone at the table rather than sitting back and reading through their menu.

Some readers understandably may find all this technology intrusive. and we do agree that having to book everything does remove spontaneity.

MSC's new way of mustering is simple (and is largely being adopted by all cruise lines as they restart): you watch the muster video in your cabin, and then to prove that you have watched, you call a number given over the PA.

Which is great. However, it defeats the object when you are all told to immediately come to your muster station to familiarise yourself with it. Suddenly, everyone is on the stairs and milling around in public spaces.

Surely better to come in your own time before the ship sets sail and install some sort of device which either recognises you have come through the space or you tap your card on a device? That's what Royal Caribbean has been doing with its e-muster process.

If MSC is going to work on crowd control, this needs some ironing out, which we have no doubt will happen over the next few sailings.

What can we say about Rob? He seems friendly enough, he chats away to himself and he makes a good cocktail. The whole concept is a lot of fun, but at £18 for two-shots (plus a free glass), it's a little steep.

We completely get why MSC is doing this (see "belt and braces" above), and it worked well in Italy for many months. However, none of those guests last summer had been vaccinated and COVID-19 was still very much a threat.

Things have moved on dramatically since, with the UK leading the way with its vaccination programme. Although not everyone on the ship has had the vaccine, they have been tested -- twice -- and proved negative.

So the idea of sitting on a minibus and visiting a site in your own country and returning to the ship without any free time, even if it's just a walk along the beach, felt very weird. After all, I can walk in a park or go to a shop freely on land in London.

MSC is mindful of this, and we know this was the very first cruise so it could not take any chances. By the time the seven-day cruises begin in June, which call in at Liverpool, Greenock and Belfast, we may see a loosening of this tightly enforced protocol, in keeping with government guidelines.

MSC has done it -- the line has their first UK cruise under their belts and by the time you read this, they will be finishing their second.

Of course, we can't predict what happens next or how the rest of this season will pan out. But by adopting this careful, considered approach, based on months of experience sailing in Italy, MSC Cruises has led the charge for the successful, healthy and enjoyable return of cruising to the UK -- and we salute them for that.