You may also like
Dismiss
Live From Silversea's Silver Muse: Why Foodies Will Love the New S.A.L.T Culinary Program
Live From Variety Cruises' Galileo: The First Eastern Mediterranean Cruise in COVID Era
"I'm Teary Eyed:" Cruise Critic Members Track MSC Cruises' Return To Sailing
Ship Spotting: Cruise Ships Get Set for Restart of Cruising
Big Week For English Cruising As Three Ships Come Sailing In
Just Back From MSC Virtuosa: Hits & Misses Of Being Back
Back On Celebrity Silhouette: From March 2020 to the Ship's First UK Cruise
Live From Norwegian Jade: What It's Like On The First NCL Cruise Back in 16 Months
MSC Group's Luxury Line "Explora Journeys" Cuts Steel For New Cruise Ship
Guernsey Set to Welcome First Cruise Ship After More Than Two-Year Break 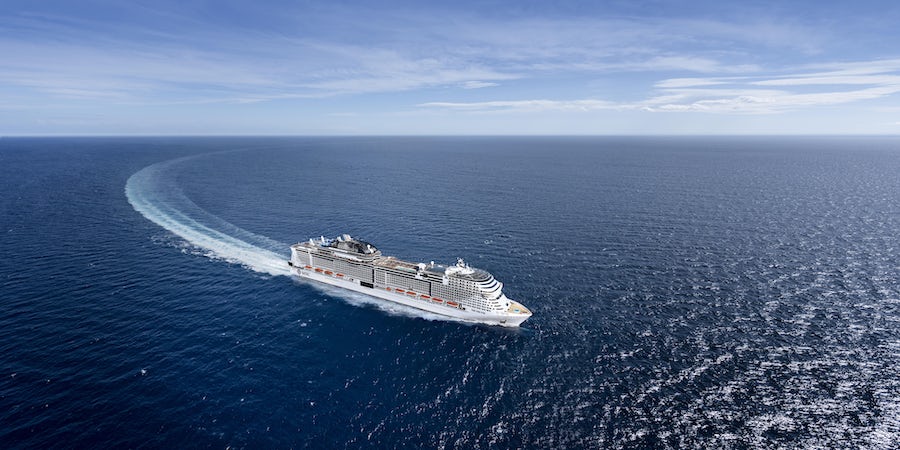 Live From MSC Virtuosa: Back on a Big New Cruise Ship For the First Time

(8 p.m. BST) -- I remember watching with envy as passengers boarded MSC Grandiosa in Italy in July last year, wondering when I would step back on a big cruise ship again.

At that time, the UK was between lockdowns, and COVID-19 vaccines seemed far away. There was no movement at all in terms of restarting cruising for British passengers.

Fast forward to May 20, 2021 and I'm in Southampton, cruise ticket in my hand, Cruise Critic mask at the ready, about to enter City Terminal for the first time in 14 months.

It felt slightly surreal, with a mixture of emotions as I step onboard: relief, excitement, anticipation. Mostly, I'm wondering: "Will it be the same as before?"

It's not until we pulled away from Southampton docks at just past 7 p.m. that it all became real. There were no fireworks or grand ceremony to mark the moment. It was enough that a cruise ship was setting sail from these shore, announcing the return of cruising in the U.K.

So what is it like to be back onboard?

Well, of course, it's not exactly the same as before. But the aspects of cruising that people love -- service, food quality, entertainment, just being away on the open water -- they are still there. They haven't changed at all, in fact, you could argue that they are even better.

So let's take a look at what's new, what's different and what's improved.

It's Oh So Quiet

MSC Virtuosa can carry 6,200 passengers at full capacity but due to government restrictions, it's carrying just 1,000 passengers. And as every venue is open and has to be staffed, there are more crew onboard than passengers -- imagine that? – leading to a higher crew-to-passenger ratio than you'd find on a luxury vessel. And it shows: the service levels are outstanding.

And though there is less hustle and bustle, it's made up for the fact that everyone is so happy to be back onboard.  It shows. It's not just the crew, who are delighted to be back at work -- but the passengers, happy to be away for the first time in months. And I count myself among them.

Of course, the quieter atmosphere may not be to everyone's taste; some people love the hustle and bustle of big ship life. But for many people, the numerous upsides -- no lines, no waiting for a drink, no squeezing in at the bar trying to catch the bartender's eye, no wandering around with a tray full of food at the buffet trying to find somewhere to sit, no waiting so long for the elevator that you give up and walk instead, no hunting in vain for a deck chair at the pool etc. etc. -- is to be welcomed.

Admittedly it's strange to see a near-empty Galleria Virtuosa (the main promenade) on one of MSC's theme nights, when normally the place would be heaving with people. But these are first steps, and capacity will gradually ramp up over the summer in line with government guidelines.  Make the most of having the ships almost to yourself while you can.

Health And Safety at the Forefront

The only way any of this is possible is for health and safety to be front and center. And MSC Cruises has had a lot of experience in this: the line has carried more than 50,000 passengers safely around Italy since July -- none of whom at the start were vaccinated.

Although it is one of a handful of ships sailing from the UK without a mandatory double vaccination policy for over 18s, the line does require proof of a negative test before you can even step foot into the terminal, as well as COVID-19 insurance.

On top of that, every passenger has an additional lateral flow test just before boarding. Once onboard you are issued with what looks like a fitbit. It's a contact tracer, where every person you get near to is recorded on the device. Should you get sick, the line knows immediately who to contact and isolate.

Onboard, life is much the same as we'd come to expect on land, with mandatory mask wearing in public areas. Staff are empowered to ask someone to put on a mask, but I have not seen a single person walking around maskless. Social distancing is practiced, with many seats and tables cordoned off and signs in elevators, rest rooms, the floors, the buffet, the bars and in the restaurants. Hand sanitizing stations are everywhere.

And of course the buffet is no longer self-serve, something we appreciate, both for food waste and hygiene reasons. We don't miss the spectacle of people piling their plates so high with every dish available and then leaving most of it. However, it will be interesting to see how the crew manage when the ship is sailing full, as being served does take longer.

You'll also get a daily temperature check (sometimes more than once) every time you enter a restaurant.

None of this seems overly intrusive, and no one I've spoken to seems to mind unduly. If you flip the narrative round, all the extra health and safety onboard is designed to make you worry less, not more. The concept of being in a bubble becomes a reality. And where can you say that on land?

This is where it gets interesting. At the start of the pandemic, everyone assumed that all those gains that cruise lines had made into getting people to try cruising would be lost because of all the negative publicity directed at the industry.

Not so, according to MSC Cruises' managing director in the U.K., Antonio Paradiso. In fact, quite the opposite:

"If you'd asked me a couple of months ago to guess what the percentage we'd have onboard the first few sailings, in terms of hard-core MSC fans and new to cruise, I'd say around the 70:30 mark," he said.

"In fact, it's around 55 percent new to cruise onboard this sailing, and we were not expecting that."

He puts it down to a mixture of people just wanting to get away, those who were unable to find accommodation in England and those who looked at the all-inclusive price that the line is offering (drinks and tips included) and decided to give it a go.

There could be an unexpected silver lining from all this: a new demographic could be tempted to try out cruising.

So what happens next? The line will continue to offer these four-night getaways for the next few weeks. Then, as the rest of the U.K. gets in line with England, the ship will offer seven-night itineraries taking in Liverpool, Belfast and Greenock in Scotland.

Hopefully, capacity restrictions will start to lift and the ships will start to fill up. Who knows? -- perhaps we will even see mask wearing requirements loosened, as has happened in the U.S.

It feels like those first tentative steps back to normality.