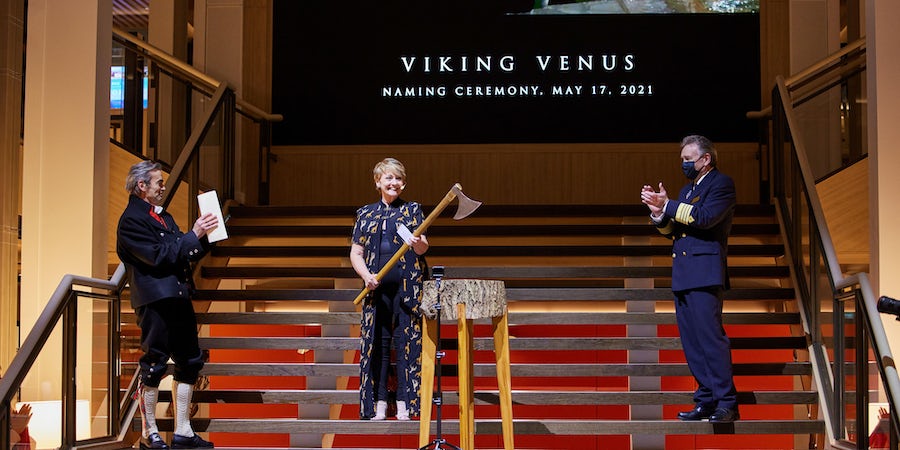 (3 a.m. EDT) -- Viking named its newest ocean ship, Viking Venus, with a celebration in the English Channel as the cruise ship set sail on its inaugural voyage May 17.

As part of the event, Viking Venus's godmother, British journalist and broadcaster Anne Diamond, offered a blessing of good fortune and safe sailing for the ship, which sets out on its first passenger sailing May 22 from Portsmouth.

In addition to commemorating the 930-passenger vessel, the event also marked the line's return to service following 14 months of paused operations.

"Today is one of the proudest days in Viking’s nearly 24-year history. When we became the first cruise line to suspend operations in March 2020, we certainly did not know it would be 14 months before guests would be welcomed back on board," Viking Chairman Torstein Hagen said.

"Now, we are among the first to set sail again -- and with our industry-leading health and safety protocols in place, we believe there is no safer way to travel the world than on a Viking voyage."

He added: "On behalf of the entire Viking family, we are delighted to celebrate the naming of our newest ship in England."

He also praised Anne Diamond for her many "journalistic and selfless contributions".

"It is a huge honor to be chosen as godmother to Viking Venus and to be officially part of the Viking family. Over my many years as a journalist I have reported and been part of many historic events, but I never dreamt I would be godmother to an ocean ship or that I would be celebrating the occasion with my family and friends on board the beautiful Viking Venus on the very first day that we are able to cruise again in the U.K.," she said.

Viking will offer five round-trip "England’s Scenic Shores" sailings this summer, which are all sold out. The eight-day voyages will call in Liverpool, and the Isles of Scilly, Falmouth and Portland. Diamond will also join passengers for the first three cruises and will serve as a guest lecturer with her presentation about the untold story of British radar inventors, including her father, during World War II.

Delivered in April 2021 at Fincantieri’s shipyard in Ancona, Italy, Viking Venus is the seventh to join Viking’s ocean fleet of identical ships.