You may also like
Dismiss
Maine Opens to Overnight Cruises, Negative COVID-19 Test Required
Cruising the Newest Ship Afloat: Live From Celebrity Apex
Live From Royal Caribbean's Odyssey of the Seas: Why You'll Never Be Bored on This Cruise Ship
Emerald Cruises Officially Launches in Australia
Disney Wish To Feature New Onboard Entertainment Firsts from Disney Cruise Line
Royal Caribbean Unveils New Entertainment Line Up on World's Biggest Ship, Wonder of the Seas
NCL Reveals More Dining, Design Details on New Cruise Ships Norwegian Prima and Norwegian Viva
These Ships Are Coming Back To The U.S. in 2022: Here’s Why You Should Care
Live from Grandeur of the Seas: The Beloved Lady G Cruise Ship Still Reigns 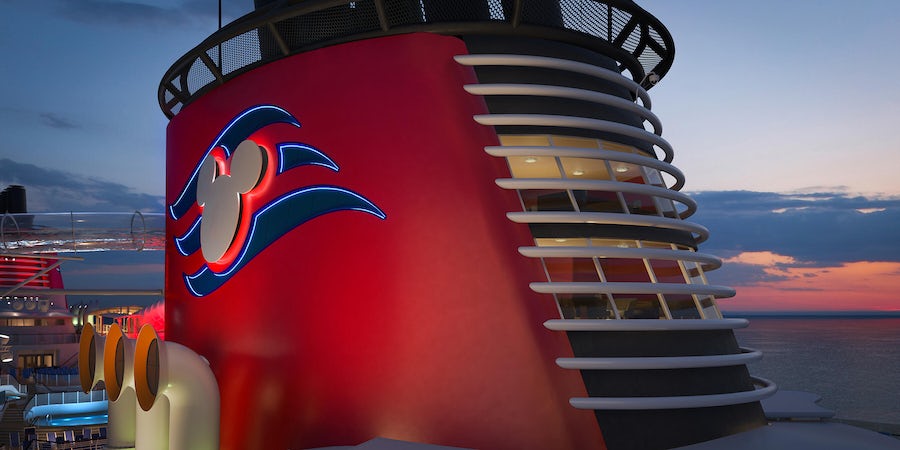 New Disney Cruise Ship to Debut A Suite in a Funnel

(12:10 p.m. EDT) -- We've had bars and restaurants wrapped around funnels before, but in an industry first Disney Cruise Line will be debuting the first suite in a funnel.

The two-story "penthouse in the sky", which is themed on the movie "Moana", will debut aboard the line's new ship, Disney Wish, when it launches in summer 2022.

The 1,966-square-foot Wish Tower Suite will be built into one of the ship's signature red funnels -- but don't worry, it's a faux funnel, not a real one.

"With the Wish Tower Suite, we are creating a breath-taking experience that continues our tradition of the most unique and enchanting accommodations at sea," said Laura Cabo, portfolio creative executive, Walt Disney Imagineering.

The space also has four-and-a-half bathrooms, the main bathrooms with soaking tubs and rain showers. Views are via an expansive two-story window wall -- but no balcony.

Guests will be whisked via a private elevator on Decks 10 and 12 to the suite, which is on Decks 14 and 15.

Pampering includes the service of a personal concierge team.

Last week the line revealed a number of new-to-fleet features including a Star Wars bar, dining experiences themed on "Frozen" and Marvel's Avengers, and an AquaMouse water ride attraction -- the first attraction for the line.

But the line held back from revealing this new suite.

The wow for kids is the "Moana" theming which will include "iconography and materials that evoke the Oceania-inspired world" of the movie. Included is a hand-crafted porcelain sculpture that as guests enter the suite, pulses with colors and chimes recalling the movie's soundtrack and the reveals itself as the heart of the character Te Fiti.

"The special lighting and audio effects will eventually fill the room to provide a truly magical, one-of-a-kind greeting," according to the cruise line.

Other movie-related decorations include a custom canvas depicting Moana sailing to sea and props that celebrate the ocean and Polynesian crafts from Moana's village. There's also a "glittering sculpture composed of shiny objects" that is an interpretation of the shiny collection of Tamatoa, the movie's greedy scavenger. In the children's room, a constellation pattern decorates the ceiling and shows star imagery from the movie -- such as Moana's oar, Gramma Tala, hero Maui's hook and the heart of Te Fiti.