You may also like
Dismiss
New Luxury Cruise Line Set to Launch in December
Cruising the Newest Ship Afloat: Live From Celebrity Apex
7 Highlights From a Week Onboard Celebrity Apex
Live From Celebrity Edge: A Cruise That Seems Normal Again; "I'm So Hopeful"
Live From Royal Caribbean's Odyssey of the Seas: Why You'll Never Be Bored on This Cruise Ship
Royal Caribbean's Newest Cruise Ship, Wonder of the Seas, Leaves the Shipyard
Emerald Cruises Officially Launches in Australia
Celebrity Beyond Completes Sea Trials; Moves One Step Closer to Debut
NCL Reveals More Dining, Design Details on New Cruise Ships Norwegian Prima and Norwegian Viva
These Ships Are Coming Back To The U.S. in 2022: Here’s Why You Should Care 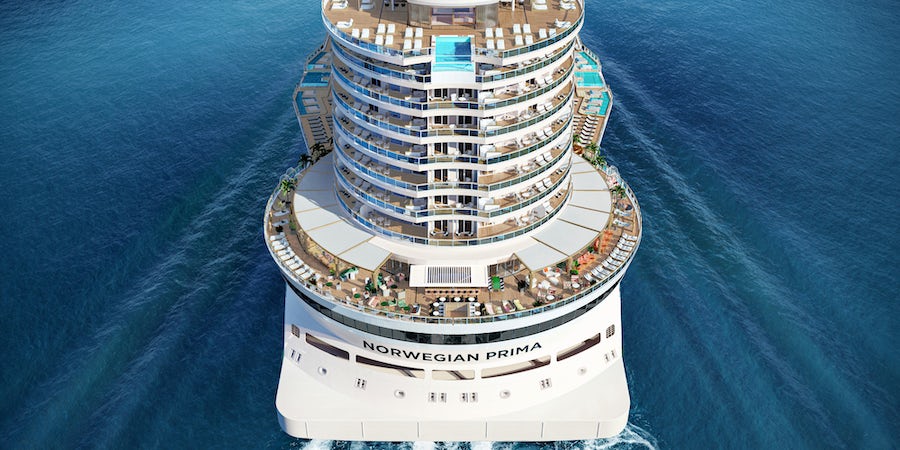 (7:50 a.m. EDT) -- Norwegian Prima, the newest cruise ship from Norwegian Cruise Line coming in summer 2022, represents a departure for the company, with a new overall design, a bigger and better luxury section, new restaurants and outdoor spaces closer to the water.

The 3,215-passenger ship, which will be the first in the line's six-ship Prima Class, is significantly smaller than the Breakaway and Breakaway-Plus ships that preceded it, by at least 1,000 passengers. That's on purpose, Norwegian Cruise Line President Harry Sommer said.

"We were going to start with a clean sheet of paper," he said in an exclusive interview with Cruise Critic. "This wasn't just taking a Breakaway and Breakaway-Plus class ship and making some tweaks. Instead, we took the plans, put them all aside and really started from what we called a 'green-field approach.' What would an innovative excellent guest experience look like on a new class of ship?"

The ship and its class are also the first to be designed under the current corporate chair, Frank Del Rio. "He was involved in everything that's guest space," Sommer said. "Design and beauty are incredibly important to him."

The result is a ship that has sophisticated design elements and an expanded outdoor space with pools and restaurants on Deck 8, an expansion of the line's Waterfront that is being renamed Ocean Boulevard. The luxury area called The Haven has been relocated to the back of the ship and expanded so all cabins and suites, as well as the sundeck and amenities, face the water, just like a Miami waterfront condo building.

"Our basic concept is to give guests lots of space, lots of activities, lots of entertainment and dining options, and do it in a way that we believe is even more upscale on this class of ship," Sommer said.

What's not visible in the plans yet is a major family-friendly top deck attraction such as the laser tag or go-cart tracks you find on the line's Breakaway-class ships. Sommer said that details about Norwegian Prima's activities and entertainment were still coming.

"I don't think we're going away from families," he said, noting that 15 percent of guests in a typical year are families with children under 18. "Families are a very important part of NCL. We will have plenty of activities for children, I promise. But we're also going to have plenty of activities for adults. We're going to make this something that's beautiful for adults and fun for kids."

Here are some more highlights of Norwegian Prima:

Perhaps the biggest change on Norwegian Prima is the reimagination of the Waterfront into Ocean Boulevard. Located on Deck 8, Ocean Boulevard is 44,000 square feet long and wraps around the entire deck, encompassing not just restaurants and bars, but pools and relaxation space.

"The hallmark was thoughtful innovation and more outdoor space" Sommer said. "So many ships out there are sort of inward looking, you sort of feel like you're in a mall, for lack of a better term. Not on an NCL ship. You actually feel like you're on an ocean-going vessel, with spectacular ocean views, and lots of space for people to sit and experience it."

A first for Norwegian is The Concourse, an outdoor sculpture garden with installations designed by Alexander Krivosheiw. The line describes the sculptures as having "stunning effects that change as the sun sets, making them perfect for photos" -- we bet these will look great on Instagram too.

Two Oceanwalk glass bridges are also new, also designed for the Instagram set. La Terraza is a new open-air lounge, meant as a retreat for sea views and for passengers to take it easy.

Infinity Beach is another new concept for Norwegian. The highlight here are two infinity pools, each on one side of the ship, and, as Sommer puts it, "much closer to the sea."

"We wanted to have a second area (besides the pool deck) where you can split the guests over two different areas, and also provide one that has a lot of amenities," Sommer said. "Between the Indulge Food Hall, the Sculpture Garden, the Oceanwalk -- there are actually activities for guests to do there as well. We think this will have a way of making the ship feel much less crowded."

Located at the back of Deck 8, Indulge Food Hall is an upscale open-air marketplace-style eatery, with 11 different venues serving different types of cuisine.

Among the venues that are new to the line include Seaside Rotisserie, serving rotisserie chicken and other items; Nudls, which will have noodle dishes from around the world, and Tamara, serving classic Indian dishes and vegetarian options. The Latin Quarter will serve "classic Latin food with a twist," while the Tapas Food Truck will have elevated Latin-inspired street food. Garden Kitchen will be a source of customized salads. Sweet lovers will gravitate to Just Desserts and Just Ice Cream.

Besides these new venues, Indulge Food Hall will be home to the returning restaurant Q Texas Smokehouse, as well as Coco's sweets and Starbucks.

It's all designed to give passengers plenty of choices, Sommer said. "We have more dining options just on the back half of Deck 8 than most ships have on their entire vessel."

The Waterfront on Norwegian ships pioneered the indoor/outdoor restaurant, and the new Ocean Boulevard will have three specialty restaurants with this kind of seating. Onda By Scarpetta debuted on Norwegian Encore, and is also on Norwegian Spirit. Los Lobos is the line's premium Mexican venue.

The Local Bar & Grill has been revamped as an upscale beach club, and will have live music, cocktails and Americana cuisine.

Besides Ocean Boulevard, the biggest design change on Norwegian Prima is the relocation of The Haven -- the line's luxury ship-within-a-ship -- to the back of the ship. The 107 Haven suites will now have their own private elevators, which take them to the rooms on decks 10 through 15 and the Haven public areas on decks 16 and 17.

"All of the Haven public spaces will be outward looking," Sommer said. "Because it's on the back of the ship, we're able to have outdoor views at all the restaurants and lounges."

The new Haven Sundeck has its own infinity pool looking out the aft of the ship. It moves away from the former Haven concept, which had an indoor pool and interior courtyard.

The Haven on Norwegian Prima also contains a new outdoor spa, with a glass-walled sauna and cold room.

Norwegian Prima and the Prima Class are being built by the Italian shipbuilding company Fincantieri, a departure for the line that has traditionally used Meyer Werft. In honor of the ship's Italian heritage, the hull art is designed by Italian graffiti artist Manuel Di Rita, known as Peeta.

For the first time, the hull design will extend to the forward superstructure of the ship. "It's sort of like a 3D-type design," Sommer said. "When you see it in person, it just pops out and it's just absolutely spectacular."