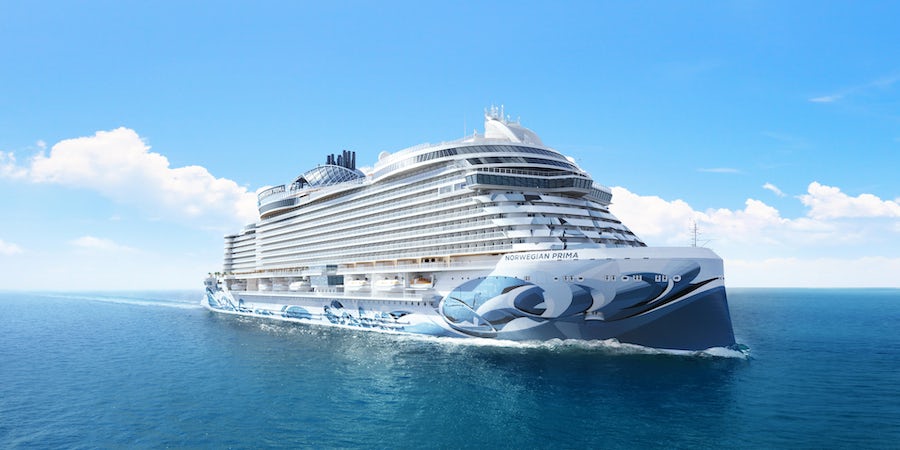 Norwegian Cruise Line has announced the name of its newest ship, coming in summer 2022. Norwegian Prima will be the first of six Prima-class ships.

The ship will hold 3,215 passengers, smaller than the Breakaway and Breakaway-Plus class that have been the hallmarks of Norwegian for the past decade. Until today, the development of these ships had been veiled behind the name "Project Leonardo."

It's also being built at Fincantieri in Italy, a departure for the line which has had its more recent newbuilds constructed by Meyer Werft in Germany.

"The name 'Prima,' which means 'first' in Italian, is a natural fit that ties into our legacy of firsts in the industry and a fitting tribute to our new Italian shipbuilding partners at Fincantieri," Norwegian Cruise Line President Harry Sommer said.

The ship will have a string of inaugural cruises beginning August 2022. From August 17 to September 13, 2022, Norwegian Prima will make 10-day voyages from Amsterdam and Copenhagen, sailing Northern Europe, the Norwegian Fjords and Baltic region.

On September 23, 2022, Norwegian Prima will sail from Southampton on a 12-day transatlantic, ending in New York. The ship will be make an October 10 cruise to Bermuda, before leaving New York to transition to the Caribbean. It will sail a series of voyages from Galveston in October before beginning a mini-season of Miami sailings from November 19 to December 3, 2022.

From December 11 to March 19, 2023, Norwegian Prima will homeport in Port Canaveral, sailing the Western Caribbean. In March 2023, it moves back up to New York to make Bermuda sailings through May 7, 2023. From there, the ship will make an 11-day transatlantic journey from New York to Iceland, where it will have an immersive Icelandic itinerary.

In summer 2023, Norwegian Prima will offer a mix of 10- and 11-day sailings of Norway and Iceland, using Reykjavik and Southampton as homeports. The summer season concludes with a 14-day roundtrip sailing from Southampton on September 17, calling on Ireland, Iceland and Norway.

More information about Norwegian Prima, including design elements and new dining venues, will be released Wednesday. Cruise Critic will have the full story, along with an exclusive interview with Sommer.