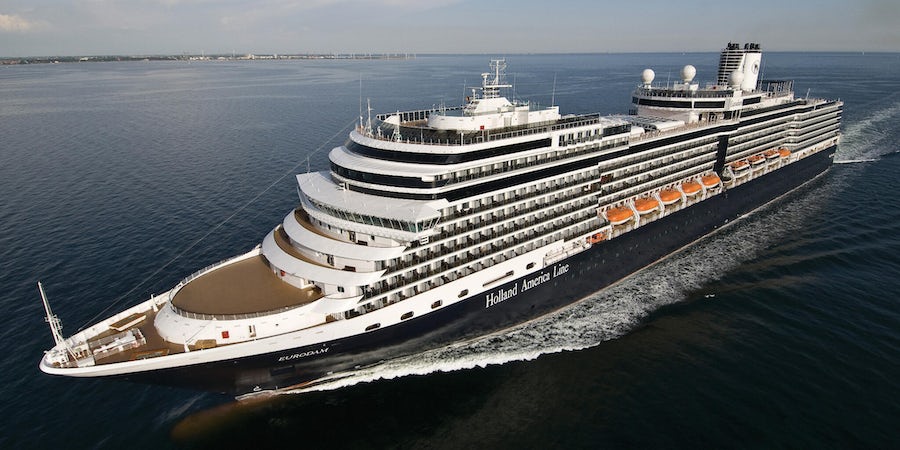 (1:05 p.m. EDT) -- Holland America Line will restart cruising by placing its ship, Eurodam, in Greece for a short season of sailings, beginning in August.

In accordance with the Greek government, the ship will require all passengers and crew to be vaccinated.

That news was just one of many topics Cruise Critic discussed with Holland America President Gus Antorcha in an exclusive interview. The Carnival Corporation veteran took over the cruise line in July 2020, right in the middle of the COVID-19 pandemic.

Here are a few topics covered during the interview.

The Eurodam restart will begin August 15 with four sailings out of Piraeus (near Athens), Antorcha said. The line has two seven-day itineraries planned so cruisers can go back-to-back and have a longer two-week voyage.

Ports on the Greek cruises will include Mykonos, Santorini, Corfu, Rhodes and Nafplion in Greece, as well as Kotor in Montenegro and Haifa in Israel. The line also has an open-jaw cruise scheduled September 5 from Athens to Venice, stopping in Mykonos, Katakolon (Olympia), Crete and Albania. Itineraries go on sale May 6.

Capacity for the first sailing of the 2,104-passenger ship will be capped at roughly 50 percent, Antorcha said. "It will ramp up quickly" after that, he said, depending on what the Greek authorities allow, with a target eventually in the mid to high 80 percent. The line is expecting that the majority of the guests will come from the U.S.

The vaccination requirements for the passengers and crew mean that Eurodam can sail as a "green ship," Antorcha said. "They feel there's very little risk that they need to mitigate in that situation," he said, adding that the line has already made health and safety enhancements onboard, including better HVAC filtration and expanded medical capability. "And so I think we'll have the ability to operate pretty close to normal."

That means the ship should have all of its food and beverage venues open, as well as the entire music program, he said. "We may take certain precautions limiting occupancy of certain venues. We still need to work through those," he said. "That'll be dependent on what Greece wants us to do and the direction that they want us to take."

In terms of whether the ship will be able to allow passengers to explore destinations on their own, the line is still figuring that out, Antorcha said. "As with most countries, local authorities have a lot of say. And so we're working that through, port by port," he said.

"I'm hopeful that because we're agreeing to a green ship, folks can get off and spend the day doing whatever they want. That would be ideal, but we have to work through it."

Restart in the U.S.

Antorcha hailed the recent guidance released by the Centers for Disease Control & Prevention as positive movement. Within the next few days, the cruise lines should be getting even more details about what's required onboard, which will lead to more practical decisions, he said.

"They've been very receptive to industry feedback," he said. "It's been extremely productive."

The cruise line recently surveyed many of its passengers, asking them for their views on vaccine requirements, onboard safety measures and other issues. HAL has yet to announce whether it will require a COVID-19 vaccine for cruises that resume in the United States.

"I've had lots of calls with Mariners members of the cruise line's loyalty club. I did listening sessions all over the world because our guests come from all over the world, and they're very practical," he said. "They're like, 'Let's get on with it. Come on, I'm vaccinated. Why can't we operate? Let's go.' Even folks that weren't vaccinated, they were still saying, 'I've been around long enough, I know the risk I'm taking. I want to go.'

"I think there's this real appetite to get back to doing what people love. Traveling and being with friends and family is clearly part of that. That's certainly what I'm picking up in the conversations with the Mariners."

Holland America is one of the largest cruise players in Alaska, with a network of lodges and more than 70 years of experience sailing in the 49th state. When Transport Canada's ban on cruises effectively shut down the 2021 Alaska season, HAL and Princess came together to support lodge-based land trips.

"There was a real desire to support the local communities," Antorcha said. "It's very cool for guests because usually you can't get into those lodges without dedicating more time to your vacation."

The trips have sold so well that the company is opening up capacity, he said. "It means that Denali is going to have tourists, which is great."

Antorcha is still optimistic that there might be a short Alaska cruise season, although the hurdles are immense. The line would either need to get a waiver of the Passenger Vessel Services Act so it wouldn't have to stop in a foreign port, or Transport Canada would have to loosen its stance and allow cruise ships to make a technical stop in the country -- essentially meaning that guests wouldn't get off the ship, which would stop only for provisioning.

"I'm an eternal optimist. " Antorcha said. "So I'm not going to give up until someone tells me to stop trying. ... I think if we get direction that's workable over the next week from the CDC, we'll be operating in Alaska."

Having the CDC sign off on cruising's restart plans is likely to convince Canada that technical stops can be done safely, he said. "Maybe if we end up operating mostly vaccinated or completely vaccinated ships, that changes how Canada feels about it.

"But before having alignment, agreement and a set of guidelines with the CDC, we couldn't really engage in detail. But I honestly think we will figure something out, because it means a lot to the state of Alaska and the people of Alaska. We need to figure this out

"Once we get the okay from the CDC, I think everything else will happen fairly quickly."

Holland America recently released a new fare option called the "Have It All" premium package that includes shore excursions, beverages, specialty dining and Wi-Fi for one base price.

Antorcha said that the option was developed based on feedback from cruisers themselves.

"The team and I, like many companies, have taken the pause during the pandemic to rethink a lot of what we do. This was a theme we were picking up. We've done something similar promotionally, but there was a real desire for an evergreen offer that was more inclusive."

The inclusive fare can give passengers as much as a 50 percent discount, as opposed to buying the components separately, Antorcha said.

"Our guests will be excited because it's literally what they're asking for," he said. "I wouldn't be surprised if the majority of the ship opts for this offer, because that's what they wanted, and we're offering it at a tremendous discount."

The line's newest Pinnacle-class ship, Rotterdam, is on time with its construction and scheduled to be delivered in August.

The ship will be similar to others in the Pinnacle class, with a few tweaks. The suite area will have a dedicated restaurant, and the Neptune Lounge is larger, he said.

The ship is scheduled to sail in Northern Europe in August, Antorcha said. "We're in discussions with the various countries. I think the Med is further along in thinking through how they want cruising to return, but it's still early."

Running a Cruise Line During a Pandemic

While Antorcha has been in the cruise industry for decades, taking over a line during a pandemic is a particular challenge. The hardest part was having to reduce the fleet by getting rid of some ships and also making staffing cuts, he said.

"Those are very, very difficult decisions that many companies in travel have had to do because travel has been one the industries most impacted," he said. "That's been the toughest part, as well as keeping the team focused and keeping morale with that going on. And then the uncertainty that we've all been living with. ... It is a very difficult time to manage any travel company and certainly a difficult time to manage Holland."

Antorcha had to make Zoom calls with customers to substitute for ship visits. But he has learned a lot through talks with former passengers.

"We have very loyal guests that have cruised with us for a very long period of time and are very willing to offer an opinion, so it's been very productive," he said. "There was just real love for the brand and for the crew.

"I have a list of probably 50 crew that we'll be adding in the first ship based on Mariners sending me names of this individual or that individual," he said. "The support of the crew was heartwarming. The ability to get started, to get some folks back on and get them working, it weighs quite heavily."

Antorcha acknowledged that getting the ships crewed up and having the crew vaccinated will be a challenge. "But we've overcome so much in this last year that honestly, it's a welcome challenge because that is a step to returning.

"We'll figure it out. We figure most things out. We'll just need a little time."