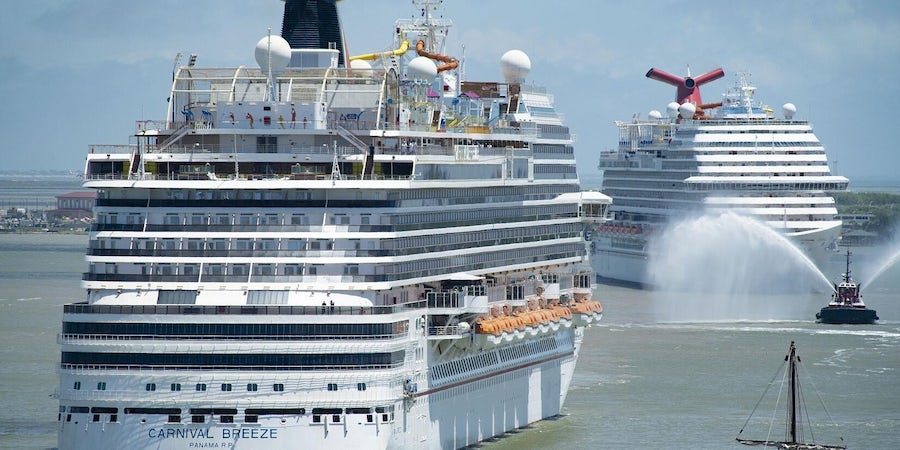 (2:57 p.m. EDT) -- Carnival Breeze and Carnival Vista arrived to their Texas homeport this weekend to great fanfare -- as well as a Port of Galveston vaccine push and a press conference on cruising's economic impact sponsored by the Federal Maritime Commission.

The two ships sailed into Galveston over the weekend and were greeted by hundreds of cruise fans along the pier watching the ships come in. Carnival Brand Ambassador John Heald posted many times on Facebook over the weekend, and Carnival Cruise Line President Christine Duffy visited both ships as well.

"It was wonderful to see so many of you make the journey to see the ships," Heald said. "Some drove for eight hours, two people actually flew from Utah just to be part of the experience. And so many of you posted photos and videos giving thanks for the return of Carnival Breeze and Carnival Vista to their homeport."

While other cruise lines also operate out of Galveston, Carnival has the most ships there, with three in port year-round. (Carnival Dream is the third.). The three ships together sail 175 cruises annually, carrying an estimated 750,000 passengers a year.

Duffy thanked people Monday for their enthusiasm. "For the people who came yesterday to Galveston, hundreds of people to welcome these ships, it meant the world to our crew," she said in a video with Heald, appearing live and masked from Carnival Vista.

"Everyone was so moved by the show of support from our amazing guests."

The arrival of the two ships was also pegged to two announcements and events. On Monday, the Port of Galveston joined other ports in the U.S. and began giving COVID-19 Pfizer vaccines to crew on Carnival Vista and Carnival Breeze.

In the video with Heald, Duffy said the crew on both ships would be "100 percent vaccinated."

Last week, the Centers for Disease Control & Prevention released new guidance for the resumption of cruising, adding support that the industry could be back up and running by mid-July.

In its guidance, the CDC laid out two paths for return to service. If cruise lines implement vaccine requirements and prove that 95 percent of passengers and 98 percent of crew are vaccinated, they can skip test cruises. If not, they will have to go through the test cruise process, which will likely slow their return to sea.

Carnival Cruise Line has not announced which way it will go. Carnival Corp. President and CEO Arnold Donald has said the parent company hasn't planned for vaccine requirements across all brands, although his comments came before the new CDC guidance.

A Monday afternoon event with Texas politicians and local officials and businesses was intended to focus on the revenue that the cruise industry brings to Galveston and the community. It was planned before the CDC took action, however, Duffy said -- and so its purpose had changed.

"This afternoon was supposed to be an event to send a message that we needed the CDC to lift the Conditional Sail Order, but we've made good progress now," she said. "I think today will be more of a pep rally."

The Port of Galveston is the only cruise port in Texas and the fourth largest, in terms of the number of passengers carried. Galveston’s cruise business generates $1.6 billion in expenditures annually and 27,000 jobs statewide, Carnival Cruise Line said in a release.

Cruise Critic will update this story as more information comes in.