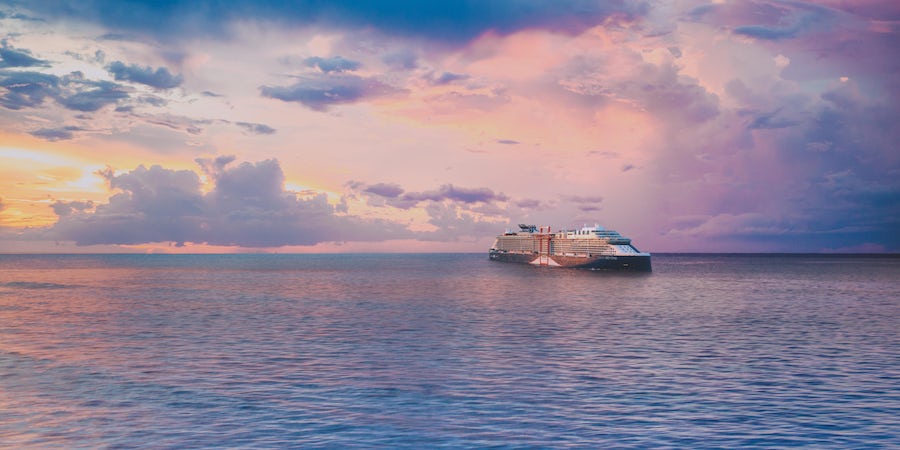 (2 p.m. EDT) -- Signaling that it is continuing to punch up toward the luxury market, Celebrity Cruises released the first images for its newest ship, Celebrity Beyond, coming in April 2022.

The 3,260-passenger ship, which builds upon fellow class members Celebrity Edge and Celebrity Apex, has been created in partnership with a phalanx of celebrity brand-name partners, including American designer Nate Berkus; British interior designer Kelly Hoppen; and actress and goop lifestyle guru Gwyneth Paltrow. Paltrow has been named the line's new Well-Being Advisor.

In its reveal Wednesday, the line described the ship's look and feel as "new luxury," and indeed, many of the innovations that Celebrity Beyond will feature are in its suites and The Retreat, a resort-within-a-resort that offers exclusive features and amenities to its suite guests. The ship will also have the first fine-dining restaurant at sea by Michelin-star chef Daniel Boulud.

The images recall an international boutique hotel, with chic design across the public spaces; an expanded Sunset Bar; rooftop garden and resort deck with attractive float pools; an airy Grand Plaza; and a total reimaging of the line's AquaClass. The Edge-class signature Magic Carpet, a multipurpose dining and gathering place that is capable of moving up and down the side of the ship spanning multiple decks, is also part of Celebrity Beyond.

Celebrity Beyond is longer and taller than its predecessors, which created airier spaces throughout the ship and an additional 179 cabins, including suites, Celebrity Cruises President and CEO Lisa Lutoff-Perlo said. "We wanted to shatter the perception of design on ships," she said in expressing excitement over the line's stable of architects and designers.

Celebrity Beyond is slated to have its maiden voyage April 27, 2022, from Southampton, although the ship will not be named there. It will stop in Bordeaux, Lisbon, Seville, Malaga, Palma de Mallorca and Barcelona, then be based in the Mediterranean with Italian Riviera, France and Greek Isles itineraries. It heads to the Caribbean in fall 2022. Cruises go on sale April 28, 2021.

Here are some of the things cruisers can look forward to on Celebrity Beyond.

Celebrity Beyond is doubling down on its suite amenities and spaces, concentrating on The Retreat -- the line's resort area just for suite guests -- as well as redesigning Luminae, the suite restaurant.

On Celebrity Beyond, the Retreat sundeck will be 40 percent larger than on previous ships and spans two decks. Kelly Hoppen, who designed the area, said she had "the ultimate holiday" in mind when creating it. "We wanted to create more of a sanctuary," she said, noting that there's a nice mix of places for groups as well as "zen areas" for relaxation.

Hoppen also took control of Luminae's design; "I let myself go wild in that space," she said. Suite guests eating in Luminae will now also have access to a wine pairing with their food, developed by Boulud.

The focus on airy spaces is apparent in the ship's redesigned two-story Edge Villas, which have private outdoor plunge pools, and the Iconic Suites, which are the largest in the fleet.

Celebrity Beyond is taking wellness to another level, with the addition of Paltrow's star power and an entire new class of suites developed for AquaClass called AquaClass SkySuites.

Paltrow made an appearance during the presentation, saying that as part of Celebrity Beyond "we're redefining well-traveled." She said that some of her involvement was "sworn to secrecy," but revealed that goop-branded amenity fitness kits would become part of AquaClass across the fleet and that she would be part of Celebrity's new Women in Wellness initiative.

While the offerings at the high-end seem the most innovative, Celebrity Beyond is not ignoring the rest of the public areas for other passengers. All in all, the main open deck is 40 percent larger than on other Edge-class ships, allowing more outdoor space.

Lutoff-Perlo noted that while outdoor space has become more important to people since the COVID-19 pandemic, the entire Edge class has been focused on connecting passengers to their outdoor surroundings. Plans for the ship, and its expansion, were underway long before the pandemic began.

One new feature that gives the space that international hotel look are the "floating pools," cantilevered more than six feet over the side of the ship. Lovers of infinity pools will never want to leave.

The main pool area looks fairly similar to previous incarnations, save new sunken seating areas designed by Hoppen. The martini-glass-shaped hot tubs are still there, as are the two-story private cabanas. A quirky statue of a man balancing an elephant bookends one end of the 25-yard lap pool.

Following the trend of Celebrity Beyond, the popular aft bar has also grown in space, spanning two decks and making it much larger, which eliminates a pain point that some cruisers found on previous Edge-class ships.

The look, designed by Berkus, is Moroccan-inspired, with use of ceramics, tile, terracotta and other materials. A terraced concept means that more people will have access to sunset views.

The ship's interior atrium, designed by the French design team of Jouin Manku, is also larger than on previous Edge-class ships and was created with an airier feel.

Sanjit Manku said that when he visited other Celebrity ships, he was surprised by the crowds surrounding the Martini Bar, and so the Celebrity mainstay is now in the center of the Grand Plaza as a full, circular bar.

The three-deck space is highlighted by a modern chandelier with hundreds of individual LED lights.

Boulud had already worked with Celebrity on different menus, but his restaurant, Le Voyage, is his first at sea.

The 50-seat specialty restaurant will focus on "taking a food journey," Boulud said during the presentation. While the fine dining cuisine will be international, it will not be targeted to a specific city or port, he said.

Le Voyage does look like a high-end restaurant, with soft colors and dining "cocoons" separated by screens that make the space seem like you are "dining in a lantern," designer Sanjit Manku said. "Everyone around you looks good."

The space also has a separate vestibule, where entering guests are out of view of the diners, creating less chaos. Diners will exit through a separate Boulud boutique.

Le Voyage is not replacing another specialty restaurant, instead it is a new one, able to be added because of the ship's extra space, Lutoff-Perlo said. She teased that more dining reveals would be coming: "Stay tuned."