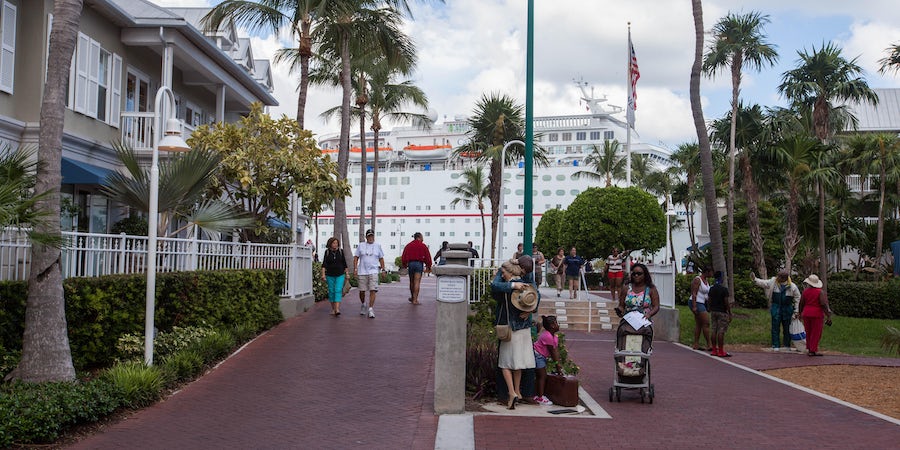 (Updated, 8:40 a.m. April 29) -- Cruises will be able to come back to Key West after all, after lawmakers pushed through a measure overriding the city's local referendums limiting sailing from the popular port. After the original bill was declared dead on the floor, Florida lawmakers attached an amendment to an unrelated piece of legislation, saying that local authorities could not pass local ballot initatives or referendums that restrict maritime commerce. The new legislation passed both Florida's Senate and House, and now goes to Governor Ron DeSantis for signature. (8:40 a.m. EDT) -- Efforts by Florida lawmakers to overturn a referendum by Key West residents to limit the type of cruise ships that call on the popular port have been abandoned. The island voted last November on three measures that will have a lasting effect on the Western and Eastern Caribbean itineraries that call in Key West. One law limits the number of persons, both passengers and crew, disembarking from cruise ships to 1,500 per day. Another banned cruise ships with a capacity of 1,300 or more from disembarking. The final measure would give priority to cruise lines with the best environmental and health records. All of the referendums were meant to keep large cruise ships from stopping in the port, while encouraging small luxury lines to remain. The Key West vote, which passed by substantive margins, spurred Florida lawmakers to see if they could overturn them in the state legislature. But according to the website

, which covers the legislative session in Tallahassee, there was no way for the bill to go forward without stripping all Florida cities with ports of regulation abilities within their communities. The Key West vote has often been grouped with other efforts worldwide to limit overtourism, for example Juneau, Alaska. But unlike Juneau, where voters will also have a referendum on cruise ships on an upcoming ballot later in 2021, Key West attracts a healthy tourist population year-round, who stay in the destination's hotels, inns, B&Bs and guesthouses; thousands of tourists attend New Year's Eve, Fantasy Fest and other annual events. Juneau is a seasonal destination that has no land route and limited air service. In a recent series of interviews with local businesses there, many expressed concern about being able to sustain a living through the continued cruise industry shutdown.