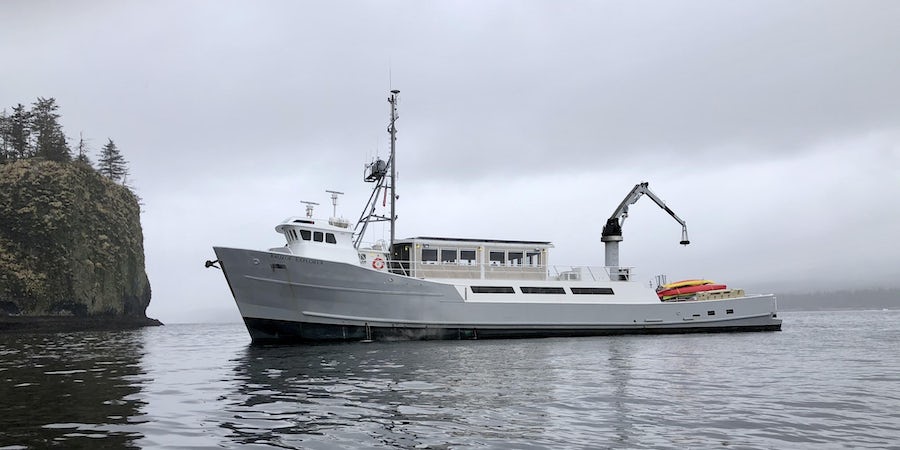 The green-gray waters of Sitka Sound churn as the tell-tale whale fins rise above the surface. The humpbacks have returned to southeast Alaska -- and they are hungry. They gather together to "bubble net feed," a phenomenon that happens frequently during the spring herring run.

We're watching from the deck of the Kruzof Explorer, a converted Bering Sea crab boat turned passenger vessel that is the first cruise ship to sail in Alaska for the 2021 season. Seven of us are onboard to mark the return to service, on a spring wildlife cruise that's only available through the small ship line Alaskan Dream Cruises.

April in Alaska's Inside Passage is a time of change. Bears emerge from hibernation; puffins return to their summer nesting grounds. Snow melts from the mountains. And all of us onboard, crew included, have been changed too, it seems, from the ongoing COVID-19 pandemic. We're giddy, to put it mildly -- happy to be going somewhere, doing something, seeing things again.

"We're off the rock!" Emjay Messinger exclaims, as the ship leaves its dock a few miles outside Sitka. She and her friend Marg Parsons live in Sitka and were contacted by the cruise line to sail at a reduced rate; MJ is a repeat Alaskan Dream Cruises customer. That's not unusual for the line, which is Alaskan-owned and operated by the Allen family, which oversee Allen Marine -- essentially a maritime touring and shipbuilding empire, in the 49th and beyond. Alaskans love one of their own.

An Alaskan father-daughter duo and a couple from Albuquerque round out the group. All of us, save the New Mexicans, have been vaccinated; everyone also undergoes a rapid COVID-19 antigen test at the ship's hospitality suite in Sitka before boarding. It was my second COVID-19 test in a week; Alaska doesn't require proof of a negative swab to enter, but it's highly encouraged through an online portal. Forms were checked at the Juneau airport when I entered the state.

The crew, too, are vaxxed -- Alaskan Dream Cruises will require everyone onboard to be fully vaccinated by the time the regular season starts up in late May. They join fellow small ship lines UnCruise Adventures and Lindblad National Geographic in the requirement. (American Cruise Lines will also be sailing in Alaska this season, but their current vaccine requirement only runs through mid-April).

Getting a vaccine in Alaska has not been the Hunger Games-style ordeal that has dogged the process in the Lower 48. Supply is plentiful, and the rollout has been smooth, particularly among the native towns, where protection rates can be above 90 percent. Maritime crewmembers are considered essential workers, thanks to the Alaskan state government. There should be no problem with the small ship cruise lines meeting their vaccine requirement.

Sitka itself has high vaccination rates, with over 65 percent having at least one shot at the beginning of April. Emjay who is 69, was vaxxed in December. "At this point, if you live here and don't have the vaccine, it's because you're making a statement," she said.

I had wondered how the pandemic would affect collective social skills, particularly on a small cruise ship. Part of the joy of an expedition cruise comes from meeting fellow nature lovers and building a sense of camaraderie. Would months of lockdowns cause us to forget how to talk to each other?

My worries were misplaced. We're all eager to interact, to bond, to meet others outside the limited pods we've been living in. The chatter is non-stop, even as we take the opportunity to spread out in Kruzof Explorer's spacious dining room/lounge. Having so many Alaskans onboard, along with the Sitka-based crew, add to the immersive experience that Alaskan Dream Cruises always tries to provide.

2021 in Alaska Belongs to Small Ships

The ship is a renovated crab fishing boat -- an unusual vessel, even in a state where quirky expedition ships are easily found. The cabins are large, too, for an expedition ship. At 120 square feet, all have queen beds, while some have an extra bunk on top. The bathrooms have a separate toilet and shower, the latter coming with sea views through a large window.

While the line canceled a second scheduled April cruise because of low demand, there is optimism for the 2021 season; the line intends to put its entire fleet of six ships in service. The vessels all carry fewer than 250 passenger and crew, which puts them outside the stringent -- most in the industry say overly so -- cruise resumption requirements imposed on the industry by the Centers for Disease Control & Prevention (CDC).

Alaska suffered greatly during the pandemic from a lack of tourism, and while land tour operators and airlines are reporting a surge of summer planning from people eager to go on "vaxications," the Inside Passage towns that rely on big cruise ships will likely be shut out for another year.

That's because Transport Canada has banned cruise ships from sailing in their waters through 2022. An obscure U.S. maritime measure requires foreign-built and flagged ships to stop in an international port, and with Canada closed to cruise traffic, large ships will likely not come back to Alaska this year, unless a Congressional waiver is made -- and the CDC changes its mind about its no-sail orders.

Alaskan Dream Cruises and its small ship compatriots have no such issues. Their ships are all American-made, the crew is American (and mostly hailing from Alaska). If there's ever been a year for small ships in Alaska to strut their stuff, it's 2021.

Luckily, Alaska got the memo; even in April, the wildlife is plentiful and a ship like Kruzof Explorer is able to get up close and personal.

Within a few hours of cruising Sitka Sound, we've seen plenty of whales, doing whale-y things. Passengers all have serious camera equipment, and they are capturing breaches, tails and fins galore. The bubble net feeding is truly extraordinary; the Albuquerque couple, who have an avid knowledge of birds, came specifically on the April trip to catch the herring season and the active wildlife sightings that result from it.

The cute furry mammals also show off. Seals love herring too, and we see them grouped together in a feeding frenzy, nearly a dozen in one hungry pod. Sea otters float by on their backs, chilling in the chilly water; one mama holding a tiny pup on her stomach. Harbor seals pop up as we kayak through Takatz Bay. A mink scurries to and from the shore.

The ship's naturalist Erin Fulton keeps a running total of wildlife on an Inside Passage map. The Alaskans get particularly excited when we take a Zodiac trip around St. Lazaria, an island that is a wildlife refuge for puffins (you know something in Alaska is cool when the local whoop and holler; trips to St. Lazaria are usually only open by lottery). We're a bit too early in the season to see them, but several screaming eagles in the sky provide entertainment anyway.

The big question is, where are the bears? We're told that they are awake, and we scan the shoreline constantly, binoculars in hand. The only time we don't want to see them is when we take our own tidepool excursions, beachcombing among the tiny crabs and mollusks.

Even without bears, Kruzof Explorer captain Eric Majeski gives us plenty of only-in-Alaska moments. We pull into Baranof Warm Springs, a seasonal waterside community known for its public baths and natural hot springs. No one is here this time of year, but even in the summer, only the smallest of cruise ships -- preferably those with fewer than a dozen passengers -- are allowed to enter.

What would be an easy hike in the summer months is complicated by packed snow and mud. We channel our inner mountain goat and scramble our way to Lake Baranof, snow lightly falling on our heads.

At the natural springs, we take off our bulky layers down to our swimsuits and slide into the hot water. Expedition guide (and a boat captain in her own right) Adrienne Wilber hands us cold beer and water. The moss-covered rocks are slippery but once you settle in, you have an infinity-pool-style view of the river and forest below.

The Alaskans in the group can't stop smiling. "Bucket list, check," said Marg; after 20 years in Sitka, she's here for the first time.

As for me, I had no idea that sitting in a natural hot spring while surrounded by snow-capped trees and mountains after a challenging hike even should be on my bucket list. And that's what makes the small cruise ship experience in Alaska so amazing -- with no particular itinerary, you never know what's around the corner.

If you're looking to ease back into travel in 2021, with a domestic trip that provides you with plenty of outdoor options -- and fewer people -- it's hard to do better.