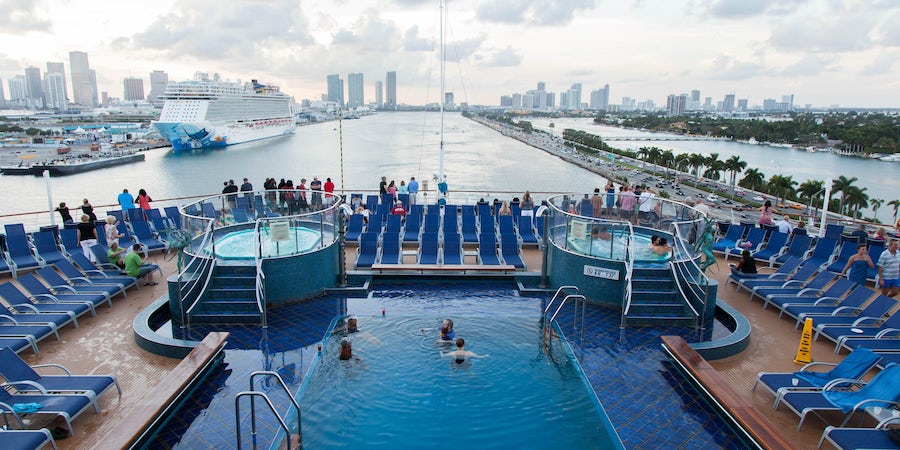 Florida Follows Through on Threat, Sues CDC Over Resumption of Cruise

(3 p.m. EST) -- The state of Florida has made good on its threat to sue the U.S. Centers for Disease Control and Prevention over its continued shutdown of the cruise industry, with Attorney General Ashley Moody filing action against the organization Thursday.

Moody and Florida Governor Ron DeSantis made the announcement at PortMiami, the epicenter of cruise operations in the United States. The CDC has prohibited cruise operations for the past 13 months and, as recently as last week, continued to insist cruises were unsafe while opening up other forms of travel within the U.S.

Moody stated she has filed suit against the CDC, the Biden Administration and the U.S. Department of Health & Human Services. The announcement comes just weeks after DeSantis and Moody had earlier threatened to take legal action.

"The reason why we're here today is because we have tens of thousands of Floridians ... who depend on the viability of our cruise industry for our livelihoods,"

. "Today is a day to fight for them, to fight for our friends and neighbors who just want to go back to work."

According to the Cruise Lines International Association, 60 percent of all passenger embarkations in the United States occurred in Florida in 2019. Florida businesses

in direct expenditures as a result of the cruise industry, which also employs an estimated 159,000 Floridians.

'Not Reasonable, Not Rational'

During the news conference, DeSantis repeatedly slammed the CDC's continued shutdown of the cruise industry, pointing out that cruises are restarting in other parts of the world with health and safety protocols in place that rival those of other tourism-based industries.

He said the only ones to lose from the CDC's continued policies on cruise will be American ports and workers employed in the industry.

"The Federal government and the CDC has locked down this industry for over a year," DeSantis said. "This is not reasonable. This is not rational."

"If they say that cruising is not safe, even with widespread vaccine availability, all the testing you want ... people are still going to go on cruises," DeSantis continued. "Instead of flying to Miami, spending money to stay in our hotels, spending money to eat in our restaurants before they get on the ship, they're going to fly to the Bahamas. And they're going to get on the ship from the Bahamas."

"How does that make any sense?"

DeSantis remarked that Florida is not looking for the long-standing Framework for Conditional Sailing to be modified or fast-tracked. It is seeking its removal entirely.

"It's something we believe we have every legal right to insist upon," he said. "We don't believe the federal government has the right to mothball a major industry for over a year, based on very little evidence and very little data."

"I think we have a good chance for success."

As recently as last week, the CDC had continued to say cruises represented a continued vector for transmission of COVID-19, without taking into account mandatory vaccination requirements being imposed by many lines or the stringent health and safety requirements the industry has had in place since last summer, including mandatory PCR testing.

"Cruising safely and responsibly during a global pandemic is difficult," the agency wrote in a news release April 2. "While cruising will always pose some risk of COVID-19 transmission, following the phases of the Conditional Sail Order will ensure cruise ship passenger operations are conducted in a way that protects crew members, passengers, and port personnel, particularly with emerging COVID-19 variants of concern."

Since releasing new technical guidance Friday that has further complicated the resumption of cruise within the United States with logistical challenges like leaving gangways and terminals free of passengers for 12 full hours after each use and further kicking required test voyages down the proverbial road, the CDC has been on the receiving end of substantial industry backlash from ports, executives, stakeholders and cruisers alike.

The agency seemingly softened its stances earlier this week after Carnival Cruise Line president Christine Duffy threatened to pull the company's ships from its U.S. homeports as it seeks to resume operations, but several industry sources told Cruise Critic on the condition of anonymity the CDC had not changed its position.

That seems to be borne out by today's announcement from DeSantis and Moody.

"Help is on the way here," DeSantis said. "We're going to keep at this until we finally get it open."

Cruise Critic has reached out to the CDC for comment and will update this story as more information becomes available.