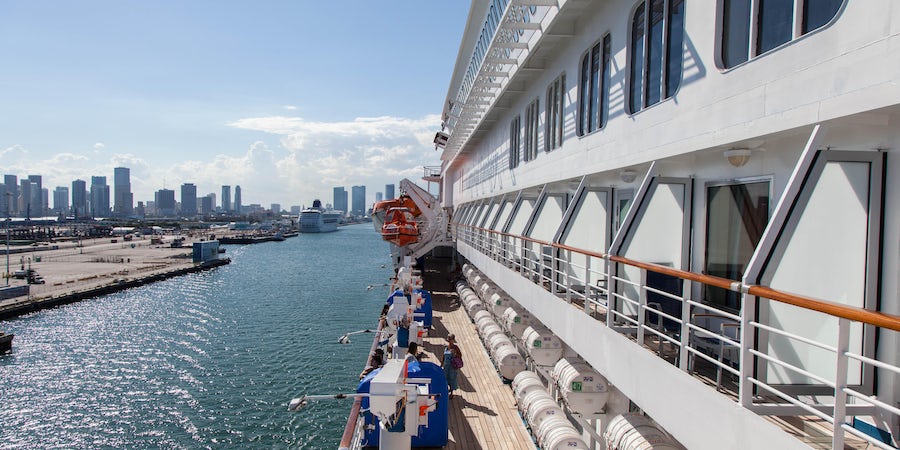 (1:50 p.m. EST) -- Joining an increasing drumbeat of pressure, Florida governor Ron DeSantis called Friday for the U.S. Centers for Disease Control and Prevention to lift its long-standing orders preventing the cruise industry from restarting within the United States.

at Port Canaveral, DeSantis and Florida Attorney General Ashley Moody said that if the agency didn't take steps to get the cruise tourism business up and running, they would explore the state's legal options.

DeSantis cited his state's vaccine rollout and availability of vaccines for those who want them as determining factors in restarting cruise. He would like to see operations back by June.

"The CDC won't let them sail," DeSantis said. "They did the No-Sail Order in March of 2020 ... and it's never been really to the point where they're making an effort to really get it back."

DeSantis singled out the Framework for Conditional sailing, release in October, as "totally unrealistic" and noted that American jobs, both within and ancillary to the cruise industry, were at stake by continuing to keep the industry shut down.

"This has a kind of ripple effect throughout all businesses," he said. "When they're sailing, there is more economic opportunity for people across a wide range of businesses. It affects a lot of jobs."

"What we need is a way forward," DeSantis said. "If you say they can't sail in the United States, people are still going to be taking cruises. Instead of flying to Orlando or Fort Lauderdale…you'll have people flying to the Bahamas. They'll be sailing from other places."

His predictions are correct, in that cruise lines have already started moving ships to other ports that are amenable to a restart. The Bahamas, St. Maarten and Bermuda have already agreed to take ships with vaccinated passengers, and more Caribbean ports are rumored to be in talks.

DeSantis emphasized that as cruise restarts in countries amiable to doing so, it is only going to hurt homeports in Florida and across the United States as lines move ships to countries that are willing to work with the lines to form a cohesive restart plan.

"Is it okay for the government to idle an industry for a year with no end in sight?" DeSantis asked.

DeSantis is the latest prominent Florida politician to openly call out the CDC on the continuation of its Framework for Conditional Sailing that has been in place since October 30, 2020. That order was the latest iteration of the "No-Sail" order that was initially imposed on the cruise industry in March 2020.

One week ago, Miami-Dade County Mayor Daniella Levine Cavaissued a letter to CDC Director Rochelle Walensky calling for the agency to work with the industry and noting some 40,000 jobs and $7 billion in revenue were tied to the cruise industry in her district.

Walensky earned the ire and surprise of some senators and industry figures recently for suggesting during hearings that neither she nor the CDC were actually in charge of the restart of cruise. She suggested that the Department of Transportation was responsible; the DOT denied that, in an email to Cruise Critic.

In recent weeks, the CDC has come under increasing fire for its ambivalence toward the cruise industry within the United States, as lines rush to find new wasy to return, including restarts in new homeports in the Caribbean, Mediterranean and the United Kingdom.

The Cruise Lines International Association has also called on the CDC to drop its restrictions on the industry and to give lines the opportunity to showcase the health and safety protocols they have spent the past 13 months working on.

The CDC, so far, has refused to budge, reiterating its Framework for Conditional Sailing will be in place as scheduled through November 1, 2021. The order itself does give the agency the authority to modify or drop it at any time.

If a lawsuit is filed, Moody said that the ban would likely be challenged because it's based on outdated medical information that is no longer valid.

“When you have a government that is working against the interests and vitality of its citizens it serves, that is a problem. And historically, you can see how that leads to the demise and destruction of those they are trying to govern,” Moody said.