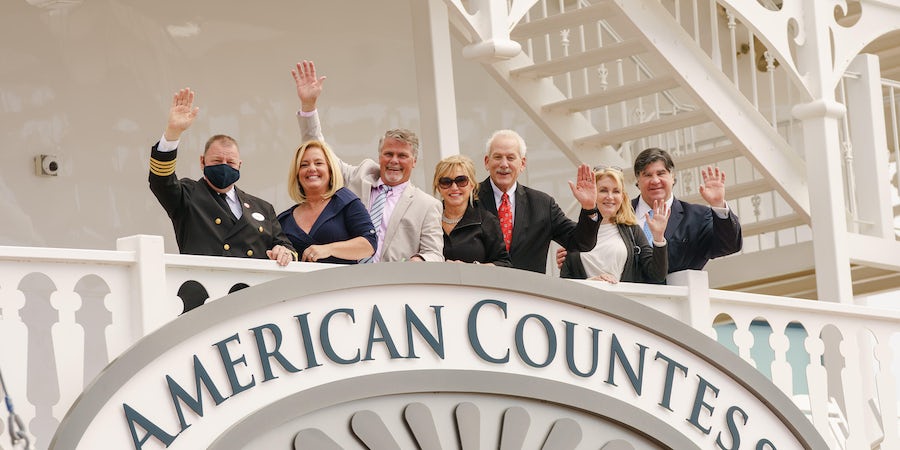 (3:30 a.m. EDT) -- In a ceremony alongside the Mississippi River on Sunday, American Queen Steamboat Company christened its newest ship, American Countess, and welcomed a return to cruising.

The ship naming not only marks the launch of a new vessel, but also the resumption of sailing for a company, that like all others in the cruise industry, has been shut down by the pandemic since March 2020.

A jubilant Waggoner kicked off events, welcoming guests to the celebration.

"I can't believe we're actually here!" Waggoner said, adding, "It's been a long and winding road to get to the christening of American Countess."

That's no exaggeration. A year of stops and starts in the cruise industry hit its domestic cruise companies as well. Even this event, and its subsequent cruise, were in jeopardy this week, then rescued at the eleventh hour after some give-and-take with regulators over what essentially amounts to paperwork.

Sister ship American Duchess resumed sailing last week, with a charter cruise and is sailing a second charter this week.

The ceremony came with an air of optimism, from AQSC, Port of New Orleans President and CEO Brandy Christian, Louisiana Lieutenant Governor Billy Nungesser and Hack. It marks a return to sailing as well as a re-emergence of tourism and industry to New Orleans and the ports along the Mississippi.

"It is truly an honor to be here today to welcome this new ship on the mighty Mississippi River," Nungesser said. "I'm sure this cruise will help us bounce back to those record-breaking numbers we saw before the pandemic."

As is typical of an American Queen Steamboat Company naming ceremony, the event felt personal. Waggoner spoke extensively about his wife, Claudette, family, partners and the team involved in bringing the ship to life. And, of course, his daughter is the ship's godmother.

Hack spoke of the importance of the moment, noting "for so many of us, it's like hitting the reset button."

Speeches complete, the party moved pierside. Hack moved to the ship's third deck, where she smashed a bottle of bourbon just above the vessel's name plate, officially welcoming it into service.

Following the ceremony, American Countess embarked on its maiden voyage, a six-night journey that will arrive in Memphis on Friday.

American Countess is a former gambling boat (Kanesville Queen), which American Queen Steamboat Company purchased in 2016 and completely stripped down and refurbished, adding a 60-foot midsection and trademark red paddlewheel. The 245-passenger ship, which initially will sail far below capacity to allow for physical distancing, offers four passenger decks, modern design and several restaurant and lounge spaces. It feels like a brand-new ship.

To get things off the ground, AQSC has implemented an extensive range of health and safety protocols, including required PCR testing the night before the cruise for all passengers, physical distancing, masks, temperature checks and facial recognition software. Beginning July 1, the company will add proof of vaccination to its list of requirements.

Cruise Critic is onboard American Countess for its inaugural sailing. Stay tuned for more coverage.