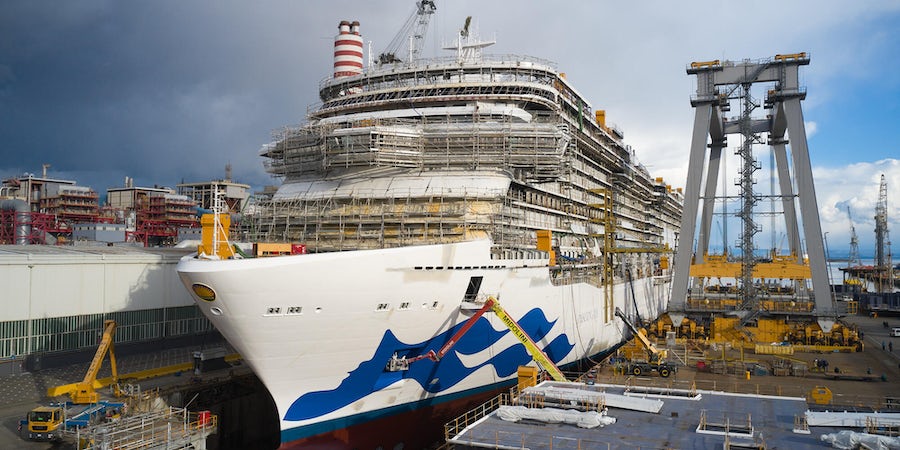 Discovery Princess Floats Out in Fincantieri

Discovery Princess Floats Out in Fincantieri

(12:20 p.m. EDT) -- Princess Cruises' newest ship, Discovery Princess, was floated out in a ceremony at the Fincantieri shipyards in Monfalcone, Italy on Thursday.

The 145,000-gross-ton passenger ship is the sixth and final Royal Class ship to be built for Princess, following in the tradition of sisters Royal Princess, Regal Princess, Majestic Princess, Sky Princess, and Enchanted Princess.

Originally slated to debut in fall 2021, Discovery Princess has seen its entry into service delayed until 2022 as a result of the ongoing global health pandemic. Following the float-out ceremony, in which the ship's hull meets the ocean for the first time, work will continue on the vessel's interior fittings and passenger accommodations.

The construction process will culminate with sea trials, where the ship's performance and handling characteristics are tested, before being handed over to Princess Cruises early next year.

The 3,660-passenger ship will debut in the port of Los Angeles (San Pedro) in March 2022, where it will offer voyages to the Mexican Riviera before repositioning to Seattle in early June to begin its weeklong voyages to Alaska.

Reservations for 2022 voyages aboard Discovery Princess are now open.