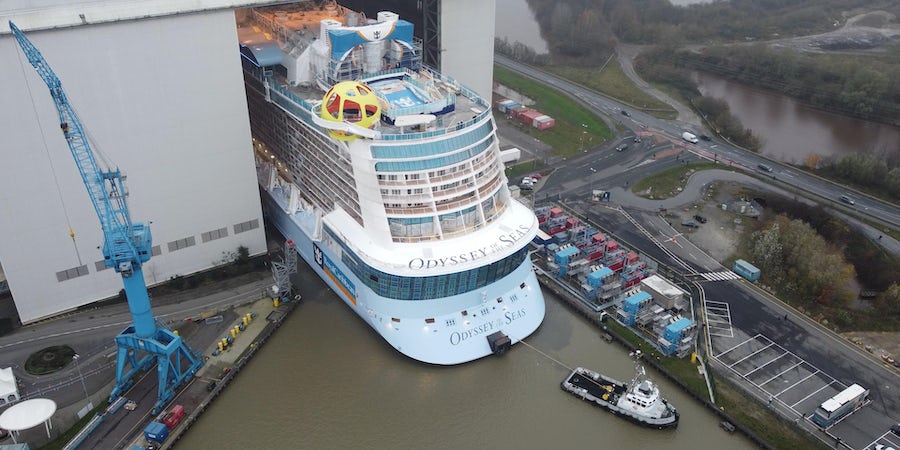 Out to Sea: Keeping Tabs on the Global Cruise Fleet

(3:30 p.m. EST) -- Though cruise operations are largely paused, ships around the world are still entering and leaving ports, undergoing drydocks, and sailing the seven seas.

We're keeping an eye on them for you, spotting some of the most interesting cruise ship movements every week and rounding them up for you so you can keep tabs on your favorite vessels.

Here's the ships we're looking at this week.

Royal Caribbean's newest ship, Odyssey of the Seas, passed a major milestone in its construction this week after transiting the River Ems from the Meyer Werft shipyards in Papenburg, Germany to its docking position in Eemshaven, Netherlands, where sea trials and final fitting-out work will take place.

The journey takes approximately 10 hours and required the use of two tugboats which guided the ship -- backwards -- up the river.

The 169,000-ton vessel is getting ready for its debut, which Royal Caribbean recently announced would take place in Haifa, Israel for local residents eager to set sail once again. All crew and passengers over 16 years of age will be required to be vaccinated against COVID-19 in order to embark.

A Reprieve for Astoria

As we reported a few weeks ago, the world's oldest cruise ship was up for auction after the summer 2020 collapse of Cruise & Maritime Voyages. But Astoria failed to meet its minimum reserve price of $12 million, according to an article published on TradeWinds.

The ship -- which famously collided with the Andrea Doria in 1956 as the Stockholm -- was rebuilt as a cruise vessel in the 1990's and has retained a loyal following of maritime afficionados ever since.

No word yet on what will happen to this one-of-a-kind ship, but its fate hasn't been sealed just yet.

Columbus Hits the End of the Line

Maybe you sailed aboard this ship when it was Princess Cruises' Star Princess of 1989. Or, maybe you hopped aboard when, in 1997, it began to sail for P&O Cruises as Arcadia. Maybe you're one of the few that remembers its short stint (and wild paint scheme) as Ocean Village. Or, perhaps you discovered this venerable cruise ship as Cruise & Maritime Voyages' Columbus.

Sadly, this week marked the end of the line for the 32-year-old vessel. After being sold to Greek operator Seajets, maritime trade

indicated the ship had been flipped, sold to scrapping interests in India.

It's just one of dozens of ships that have been scrapped since the global coronavirus pandemic began last year.

So as Columbus transits the Suez Canal, bound for its one last port of call, remember that there are other new ships launching all the time. It's always hard to bid farewell to an old favorite, but new ships are out there, too, just waiting to be discovered.