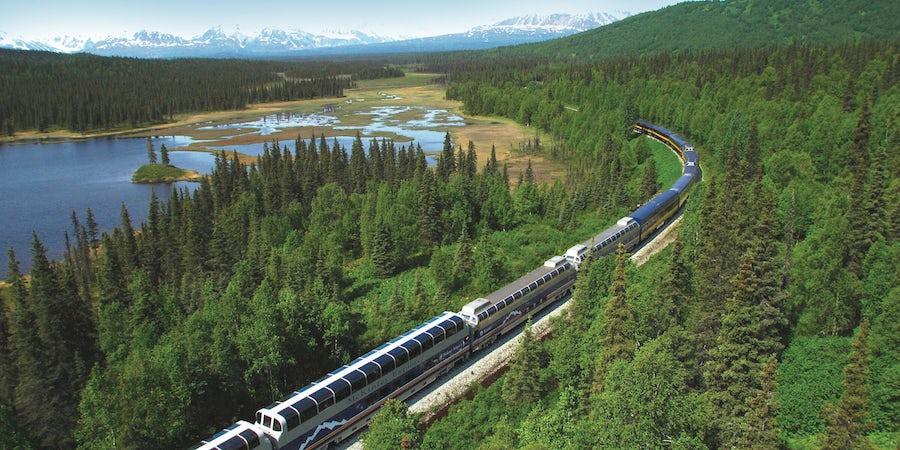 (2:45 p.m. EST) -- Two of the largest and longest-operating cruise lines in Alaska -- Princess and Holland America -- have switched gears for summer 2021, rolling out a series of guided land tours to the Last Frontier with no cruise component at all.

Holland America Line and Princess Cruises are now accepting reservations for escorted and explorer tours throughout Alaska; as well as Denali rail tours; and independent hotel stay and sightseeing tour packages. Tours will begin in late-May and will run until early September 2021.

The move comes after Transport Canada's decision to ban cruise vessels from Canadian waters into early 2022. That ruling has seen the majority of cruise operations in Alaska canceled for yet another year, as U.S. cabotage laws require a foreign port stop for foreign-flagged cruise vessels intending to call on U.S. ports of call.

The 2020 cruise season in Alaska was canceled entirely by the COVID-19 health pandemic, resulting in devastating economic losses for Alaskan tourism.

Princess and Holland America have been operating in Alaska for decades and have invested heavily in extensive, on-the-ground infrastructure including hotels, motorcoaches, tour guides and dedicated rail cars throughout the state.

The tours being offered concentrate on Holland America's McKinley Chalet Resort at Denali National Park; the Kenai Princess Wilderness Lodge overlooking the Kenai River; the Westmark in Fairbanks and the Captain Cook hotel in Anchorage.

By offering up their own land tours in Alaska in 2021, both lines can continue to safely court travelers looking to explore the state by offering the tour portion of their popular cruise tour programs -- just without the cruise.

A land tour booked through the lines also gives travelers access to many of the excursion possibilities that are available in Alaska. While an Alaska land trip won't get you to Glacier Bay, you'd still be able to purchase tours to go flightseeing, river rafting and other bucket-list adventures.

The lines said specifically that for tours that include Denali, travelers will be able to take the full eight-hour Tundra Wilderness Tour at Denali, where guests have opportunities to see the big five -- grizzly bears, wolves, moose, caribou and Dall sheep. Other included tours are the Portage Glacier Cruise near Anchorage and Riverboat Discovery excursion in Fairbanks.

"We love Alaska, and we love that we get to share it with visitors from all over the world. We're committed to helping locals and visitors alike experience all the best parts of Alaska in a safe way," said Dave McGlothlin, vice president, tour operations, for Holland America and Princess. "For the last year, many people stayed close to home, so this summer, as we're able to reopen some of these land offerings, we are more ready than ever to welcome visitors back through our doors."

Both lines will offer a variety of tours this summer to suit every taste and budget:

Escorted and Explorer tours will offer the ability for passengers to explore the Kenai Peninsula, Anchorage, Denali and Fairbanks.

Escorted tours range from six to seven nights and include a dedicated tour director. Explorer tours run between five and six nights, and don't include a tour director, though staff are still available to assist along the journey. Most meals and some sightseeing are included in prices, along with rail travel and GoldStar service on Alaska Railroad cars.

Special Denali Rail tours run up to six nights and include up to four nights exploring the breathtaking wilderness of Denali National Park. Options include travel by rail in Adventure Class Alaska Railroad cars, or a combination of rail and motorcoach. Denali Rail tours run from Anchorage to Denali, Anchorage to Denali to Fairbanks, or Fairbanks to Denali to Anchorage. No meals or sightseeing are included.

For independent travelers, Holland America's Westmark Fairbanks Hotel and Conference Center is currently open, while the other venues  -- Holland America's McKinley Chalet Resort at Denali National Park, and the Kenai Princess Wilderness Lodge -- will open between May 28 and September 6, 2021.

Portage Glacier cruises will also operate May 28 to September 6, with five daily departures of these one-hour sightseeing voyages.

Both lines note that travellers booking with

for the latest entry

requirements. The full slate of tours is listed on the

The tours are being marketed primarily to Americans at this time, given travel bans in other countries, a spokesperson said. The companies would not prohibit anyone from booking if they are able to travel and abide by the regulations set forward by the State of Alaska.

Holland America Line and Princess will return to offer cruises and land tours in Alaska and British Columbia in 2022. Those itineraries, along with these new 2021 land programs, are now open for booking.