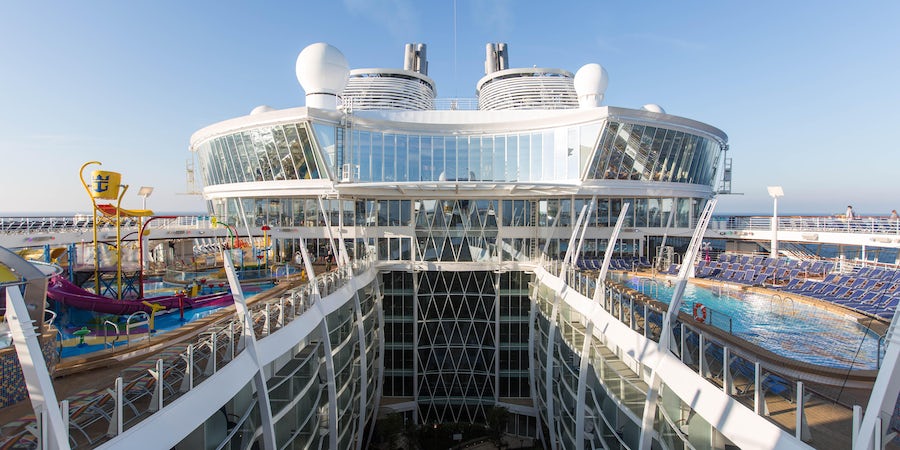 Royal Caribbean Eyeing More Countries For Cruise Restart; UK Could Be Next

(12:15 p.m. EST) -- Royal Caribbean is ready to place a cruise ships wherever vaccine levels are high, and/or infection rates are low, the line's Vice President of Europe, Middle East and Africa confirmed.

Speaking exclusively to Cruise Critic, Ben Bouldin -- who was instrumental in bringing Odyssey of the Seas into Israel as the world's first fully vaccinated ship, a move announced this week -- said the line was actively looking at countries where the vaccine roll out was progressing well.

That includes the U.K., he said. Countries where COVID-19 had been handled well, such as Greece, where infection rates have been extremely low compared to the rest of Europe, are also a possibility.

The line restarted cruising in Singapore, where infection rates were also low, on Quantum of the Seas in December.

UK Next For a Royal Ship

"The UK could be next to get a Royal ship. Absolutely. Vaccine levels are encouraging. I think government rhetoric more positive," Bouldin said.

He also reiterated his desire for the UK government to remove its advisory on cruise -- the only travel sector to have a specific advisory (river cruises are exempt).

"We're obviously waiting for the 12th April task force paper and I very much hope the government may find a way of removing the exclusion around cruise.

"And then allowing us to return as hospitality and tourism returns and if that happens to be domestically so be it, that would give us an opportunity to start to mobilise again."

Bouldin said once the advisory was lifted the line could start preparing for a restart and would initially offer round-Britain cruises.

P&O Cruises and Princess have already anticipated this and both have announced that they are scrapping all their international cruises from the UK for the summer, offering a series of short-break and round-Britain cruises instead.

Commenting on the move, Bouldin said: "I'm not sure I'm in the place of offering a whole summer of domestic cruising, but certainly we understand domestic cruising could well form part of our start up plan."

Successful restarts also depend on cooperation from the governments, both in terms of homeports and places you can visit. Unlike Singapore, where cruises don't have port stops, the sailings from Israel will stop in other countries -- Greece and Cyprus.

"Israel has been doing fantastically well, but I don't think everybody suddenly thought: 'Hey let's do cruise in Israel'," Bouldin said. "We did, we thought it was a good idea and actually we were delighted by the response we received from the Israeli authorities.

"But also we've had a very positive reaction from the Greek and Cypriot governments too. And they are hoping to get some degree of tourism open this summer.

Spain still has "significant COVID challenges," Bouldin said.  But, "from a tourism sector perspective they are desperate to get something going."

Restarts also depend on access to a healthy source market, he said.

He cited TUI Cruises, part-owned by the Royal Caribbean Group, which has been successfully operating round-Canary Island cruises just for Germans, as a good model.

"If we did base a ship in Greece, we'd want to fly people out there because the Greek cruise market in isolation is not massive," he said.

When asked whether vaccine rollout may make the recommendations of the Healthy Sail Panel -- a joint venture by Royal Caribbean Group and Norwegian Cruise Line Holdings -- redundant, Bouldin replied:

"We have asked the Healthy Sail Panel to go back and revisit their findings in light of the improvements and the encouraging news vaccines provide.

"I think for all of us we'd like to get to a world where we don't have to wear masks, and for sure, on a cruise vacation, I think everyone would feel the same."

But don't expect to throw the masks away just yet, he cautioned.

"What we have to remember is where vaccines are looking encouraging in those markets where prevalence is high, it's going to be a while before the whole world gets to the same level," he said.

"So I think for a while we're going to have to balance an abundance of caution when it comes to health and safety which will mean the vast majority of our protocols will remain intact."

Although the Group is not mandating vaccines right now, that's not out of the question fro the future, depending on the findings of the Healthy Sail Panel, Bouldin said.

Unlike the Odyssey of the Seas cruises, which have a vaccine requirement to sail, the ones on Quantum employ a mix of COVID-19 testing, contract tracing, masks and social distancing to prevent outbreaks.

"We're sailing in Singapore not requiring a vaccine so we know we don't have to have a vaccine to sail, We can make it work," he said.

"But equally if we decide that vaccines play a critical role, then that will come out in the assessment of the HSP down the line."

He also said that Royal would not mandate a specific vaccine throughout its fleet, working with the countries involved in the restart on their requirements instead: "We are not mandating any particular vaccine. We will respect the vaccine program locally."

The big question is whether the vaccine rollout in the United States will help shift thinking on the current Centers for Disease Control ban on cruising.

Bouldin was noncommittal, only noting that success elsewhere would demonstrate the thoroughness of the Healthy Sail panel recommendations.

"I just hope that wherever cruising restarts in the world, it proves successful and a further chance for us to demonstrate the protocols that our Healthy Sail Panel have recommended," he said.

"For the person delivering this Israel program, we hope for great success, and if that leads to success elsewhere, fantastic."