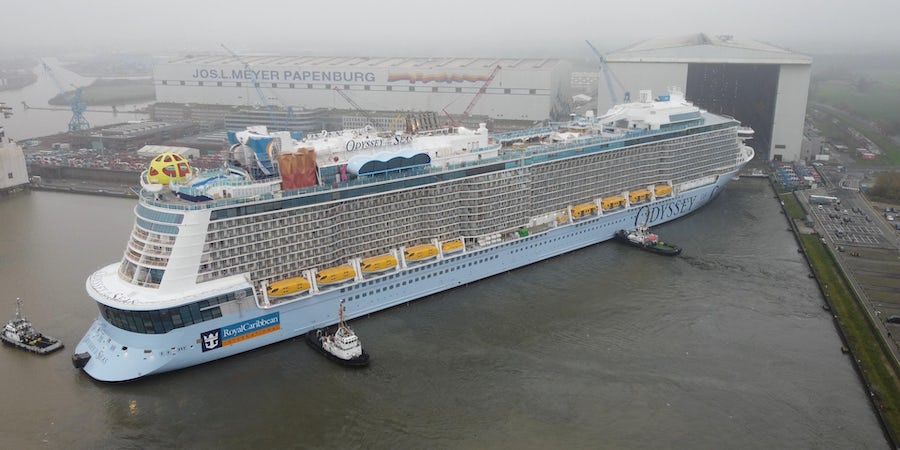 Royal Caribbean to Debut New Cruise Ship in Israel; All Crew and Over-16s Will Be Vaccinated

(8 a.m. EST) -- In the clearest signal yet that vaccines will be the way for the cruise industry to restart, Royal Caribbean is placing its newest ship, Odyssey of the Seas, in Israel -- and has confirmed all crew and passengers older than 16 will be vaccinated.

Odyssey of the Seas will offer three- to seven-night cruises to Israelis from Haifa to the Greek islands, including Rhodes, Santorini, Mykonos and Cyprus starting in May. It's the first time the line has based a ship in Israel.

In a letter to booked guests on Odyssey, the line said that passengers on the ship's original Mediterranean sailings scheduled from May 9 to October 28, 2021 would be able to Lift and Shift their cruise to 2022, receive a refund or a 125 percent Future Cruise Credit.

It will be the second Royal Caribbean ship to restart operations. Quantum of the Seas has been operating in Singapore -- another country which has tackled the COVID-19 virus successfully, with low contagion rates -- offering cruises to nowhere for Singaporeans since December last year.

In conjunction with Israel's health and tourism authorities, Royal Caribbean will be the first ship to offer fully vaccinated sailings, where both crew and passengers above the age of 16 will be vaccinated against COVID-19.

Royal Caribbean didn't reveal details of how the line would check for passenger vaccination status. The line said it would release details on the additional health and safety measures to be implemented by Israel and Royal Caribbean at a later date.

"Sailing from Israel is an opportunity we have had our sights on for quite some time," Royal Caribbean President and CEO Michael Bayley said. "We greatly appreciate the government of Israel for their collaboration and confidence in us to deliver memorable cruise experiences to their residents."

Bayley hinted that vaccines would be the way forward at the Royal Caribbean Group's Q4 earnings call last week, stating: "Our belief is people 65-plus are getting vaccinated, and we're seeing that very much in our bookings from January forward."

Royal Caribbean is the first mainstream line to announce a shipwide vaccine mandate to those eligible. While other lines, such as Crystal, Saga and American Queen Steamboat Company, have said they will require passenger vaccines, those lines generally have smaller ships, with an older passenger base. (Read our updated list here on cruise ship vaccine requirements).

Cruise Critic readers, in surveys, have supported vaccine requirements, with 81 percent saying they would cruise if vaccines were mandated. The issue still provokes debate on message boards, on social media and in the general populace.

The decision was hailed by the Israeli Prime Minister Benjamin Netanyahu as a success story for Israel, which has achieved a high country-wide vaccination rate.

"Thanks to the millions of vaccines we have brought, I am proud that Israel will be the first country in the world to launch Royal Caribbean's new flagship," he said. "Royal Caribbean's decision to come to Israel is a significant expression of confidence in our policy. This is an important economic, touristic moment for the State of Israel."

Other countries that rely on tourism also supported the effort.

"We are very happy with today's announcement as our recent travel agreement with Israel is already bringing results," said Haris Theoharis, the Greek Minister of Tourism.

And Savvas Perdios, the Deputy Minister of Tourism for Cyprus commented: "It is an honor to be featured in Royal Caribbean’s itinerary this summer, and we are delighted to welcome their newest ship to our island."

Odyssey of the Seas is the line's fourth Quantum-class ship, and the second Quantum Ultra, and has been recently been completed at the Meyer-Werft shipyard, in Germany. It was conveyed down the River Ems over the weekend, to begin its sea trials in the North Sea.

The new sailings will go on sale March 9.

Want to see more photos of Odyssey of the Seas ahead of its May 2021 debut? Click here for photos of the near-completed ship, including renderings of SeaPlex, the main pool deck and a never-before-seen show in Two70.