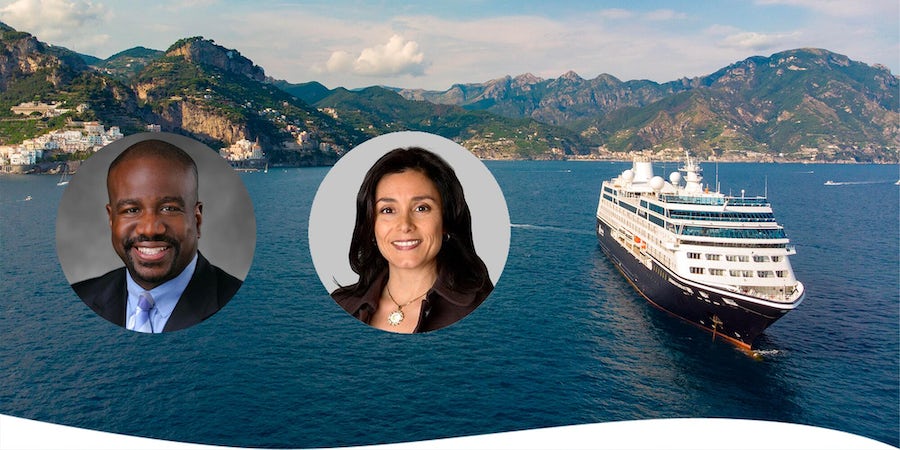 Fans of small cruise ships -- a cohort that is steadily growing, as people look for more intimate cruises in the future -- were thrilled last month when the line's new owners, Sycamore Partners, announced the fleet would immediately expand from three to four vessels by adding the former Pacific Princess.

Still, any changes within the cruise world spark concerns from loyal passengers. To find out what's in store for the line as it moves from the Royal Caribbean Group umbrella to being on its own, we sat down virtually with Azamara President Carol Cabezas as well as board chairman (and former Holland America Line president) Orlando Ashford.

The following is an abridged version of our question-and-answer session with the duo.

Cruise Critic: We have an avid Azamara fan base on our site, and people love what the brand stands for. What they really want to know is what will things be like going forward. Where do you see Azamara expanding and growing now, with the new ownership and with you two as the leadership team?

Carol Cabezas: The idea behind Sycamore coming in is that they want more of what has been working really, really well. The brand is well positioned. It has a fantastic identity that is very clear, and we want to continue with that.

The way we see expansion and growth has to do with, of course, growing the fleet, which Sycamore has already demonstrated by buying a ship for us. That will allow us to expand our markets into having more of the different destinations that guests love to go to. There's only so much we can do with three ships. With more ships, we can do a whole lot more.

The other expansion is in how we deliver on land, because that's a big part of what we promise, in terms of destination immersion. It's one thing to be able to cover certain elements of a country all along the shoreline, but there might be things that you want to do into the interior. And you can do that, either on the front end or on the back end of a cruise.

Cruise Critic: What it sounds like is the concept of cruise tour. Is Azamara going down that route?

Carol Cabezas: It's certainly something we're looking at very hard. Because of the current situation and the kinds of limitations to travel at the moment, we've had to scale back, but it's where we believe we can add a tremendous amount of value to the experience that guests can have when they come and travel with Azamara. It's not just the cruise piece, it's that experience on land either before, during or after the cruise.

Cruise Critic: What do you think the difference is going to be for Azamara now that it's a standalone brand, as opposed to being part of a larger portfolio?

Carol Cabezas: The decision process will be different. In the past, certain decisions were made within the context of "What's the right answer for the corporation?" Now in our new independent environment, the decisions that we come to will be strictly for the benefit of how our business functions.

Orlando Ashford: When Carol needs something that's going to benefit the business, there's only a couple of people she has to talk to: It's me and then our partners from Sycamore. Our track record of Sycamore is one of growth, and that's the intention here. This is not a situation where we're doing some kind of financial gymnastics to create value.

It's about serving the guests, delivering what Azamara has always delivered, but now with a fourth ship, being able to do more of it. And we have ambition for additional growth, whether that's other existing ships or new builds, we'll figure that out. We're having those discussions, but the desire is for growth.

Cruise Critic: When you say growth, are you envisioning just adding more ships or are you thinking about going into another sector such as expedition?

OA: I don't think we've answered that question, but we're open. At the end of the day, the guests determine how big we become ... I think we could do five or six ships. Do we need to go into other sectors? I don't know. We're exploring everything.

Our first priority is to stand Azamara up and be ready for when we can get back in the water, hopefully sooner than later. And then as we get momentum, then our guests will say if they want more. The good news is we have an investment partner that's willing to allow us to do more.

Cruise Critic: In terms of coming back, one thing that Azamara already had as a hallmark were its country-specific sailings. Do you think that strategy will help you with the comeback, as some countries might open before others?

Carol Cabezas: As we start getting back into the swing of things and understanding what kinds of protocols and requirements are going to be in place within the different destinations we visit, it makes it a lot easier to work within the context of one country versus three, four or five different countries for a given itinerary. So it is something that will help our return to service for sure, as well as continuing to serve the desire for people to get more immersed in a given country.

Cruise Critic As this pandemic has gone on, people are looking a more intimate environment on their vacations. How do you see positioning yourselves against the other small ship companies that are out there?

Carol Cabezas: Of course we have inspired itineraries. The other thing is the programming. Because nobody else does things like our AzAmazing evenings. That's become a signature item for the brand, where we take the entire ship to go experience this something culturally unique about a destination. I want to make sure we're upfront about the fact that in this period where we're transitioning, we might have to make them look a little bit different so that we can still be in compliance with health regulations. But programming like that will continue.

Particularly, the White Nights -- an onboard party where everyone, crew and guests, wear white -- is something that people really have come to expect because it's that fun. Everyone on board the ship is coming together in a relaxed, fun atmosphere.

We empower the leadership team on board the ships to operate as if this is their vessel. They own it. They know what is in the best interest of the guests. And I think that's a little bit different than how brands tend to operate. So I think those are just a few of the things that distinguish us.

OA: As we emerge from this pandemic, I think the relationship and the trust between the guests and the brand is going to be more important than ever. We are taking that extra bit of attention to make sure that we manage all of those things together, that's going to be particularly important as the world opens back up. People will be voting with their feet, on who do I trust with my experience, my vacation, my time off.

Where I'm excited about this brand is that trust, that connection, that intimacy is a valued part of Azamara. And that I think will make people feel really good about taking that initial cruise with Azamara when we get back into the water.

Cruise Critic: It's always exciting to hear about a new ship. People love the R-class ships (Azamara bought Pacific Princess, which is similar to the current vessels Azamara Journey, Azamara Quest and Azamara Pursuit). Any ideas on the name or any details you can give us on the renovations?

Carol Cabezas: We have some ideas, actually, some pretty cool ideas, which the fun part of seeing which ones of these do we bring to life in our new ship? Because it's almost like a blank canvas. Of course, we want her to be very consistent with her sister ships so that when a guest comes onboard, they feel like they're home. But there are elements that we can add and integrate that we believe really builds upon the things that guests value very much. So stay tuned: We have some pretty cool ideas in the works.

Cruise Critic: Azamara has been a little bit of well-kept secret. Orlando, you brought in a lot of great partnerships during your HAL experience, such as Lincoln Center and Oprah. Do you think that partnership approach will help elevate Azamara a little bit?

OA: We're excited about the Azamara brand, thus the investment. We want to grow beyond just four ships. Part of our ability to do that will be to invite more people to experience the great things that Azamara delivers. We'll have to figure out some of the most efficient ways to do that.

Clearly the partnership angle works, having Oprah, that wasn't too bad. But we'll figure out the version of that for Azamara. My intention is not to rinse and repeat. If some of those ideas are appropriate, great. But I'm sure there's some brand-new ones. Carol has said that they've got some cool ideas, and I've got a few too, and others do as well. We'll mix some together and we will have plenty of surprises for you guys to report on over the coming weeks and months and years, I can guarantee you that, because that's why we're here.