You may also like
Dismiss
Coronavirus: Updated Cruise Ship Policies and Cancellations Because of COVID-19 (2021)
Celestyal Cruises Buys Costa Cruises Ship
Rolling Out the Deals: Why Now Might Be a Great Time to Book a Cruise
Wave Season Cruise Deals 2021
Allure of the Seas Cruise Ship to Make Oasis-Class Debut in Galveston
Emerald Cruises Officially Launches in Australia
MSC Virtuosa to Return for Line’s Biggest Ever UK Season, MSC Cruises to Base Ship in the UK Year Round in 2022
Ambassador Cruise Line Sees Potential Expansion Into International Cruises
These Ships Are Coming Back To The U.S. in 2022: Here’s Why You Should Care
Just Back From Allure of The Seas' Maiden Galveston Sailing: Hits and Misses 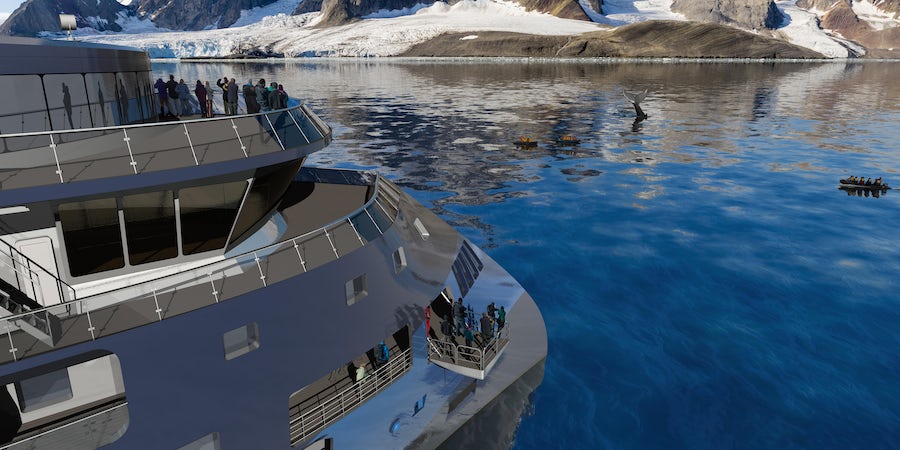 The U.S.-based small ship cruise line, a subsidiary of American Queen Steamboat Company, will debut its new 200-passenger Ocean Discoverer expedition vessel with a repositioning sailing from Puerto Caldera, Costa Rica to San Diego on May 12, 2023.

The ship will then sail for Vancouver, with a series of 11-and-12-day Alaskan cruises running between Vancouver and Sitka, or Sitka and Seattle.

The line's first expedition vessel, Ocean Victory, will continue to operate between Vancouver and Sitka during the summer of 2023, with repositioning sailings offered between San Diego and Puerto Caldera.

Ocean Discoverer will be a direct sister to Ocean Victory, which had been scheduled to debut in Alaska in summer 2021 before Transport Canada banned cruise ships for the year. Both vessels are part of SunStone (a ship management company)'s Infinity Class and feature the distinctive swept-back X-BOW technology that is supposed to improve efficiency and contribute to a smoother passenger ride in heavy seas.

A larger vessel than Victory's Victory I and Victory II, Ocean Discoverer will offer 93 suites, 68 of which will offer private balconies. Nine staterooms will offer French balconies, while 16 will have ocean views.

Onboard, passengers will also find two dining venues, an observation lounge, a piano bar, library, and spa facilities that include a fitness center, along with an outdoor swimming pool and hot tub.

The ship will also offer a fleet of zodiac rafts, kayaks and other tools for exploration in the remote wilderness of Alaska.

Victory I and Victory II, meanwhile, will offer 11 to 16-day voyages throughout the Great Lakes ports of Canada and the United States in 2023. The 202-passenger sister ships will also sail south, calling on ports like Savannah, Charleston, and Fernandina Beach, while Victory II will operate a season of sailings on Mexico's Yucatan Peninsula, sailing roundtrip from Cozumel, Mexico.

"Cruisers yearn to travel again, as evidenced by 2021 and 2022 inquiries and our webinar popularity with guests and travel partners. Opening up 2023 to satisfy that wanderlust had to be done," said Kari Tarnowski, Senior Vice President of Marketing for American Queen Steamboat Company and Victory Cruise Lines. "It is an exciting moment for our company and valued guests as we grow together with a mutual desire to discover new destinations and rediscover those places special to us once again."

American Queen will return to the Mississippi river in 2023, along with American Countess and American Duchess.

American Empress, meanwhile, returns in 2023 to operate American Queen's popular river voyages on the Columbia and Snake rivers, traveling through the heart of Oregon and Washington State, with sailings running between Portland (Vancouver, WA) and Spokane until November 26, 2023.

All 2023 itineraries are currently available for booking, and both Victory and American Queen Steamboat Company are offering savings of up to $1,200 per stateroom on 2023 itineraries booked by April 30, 2021.

The company states it intends to also open a new office for both lines in South Florida in 2022, with marketing, sales and operation teams relocating to the heart of the cruise industry.