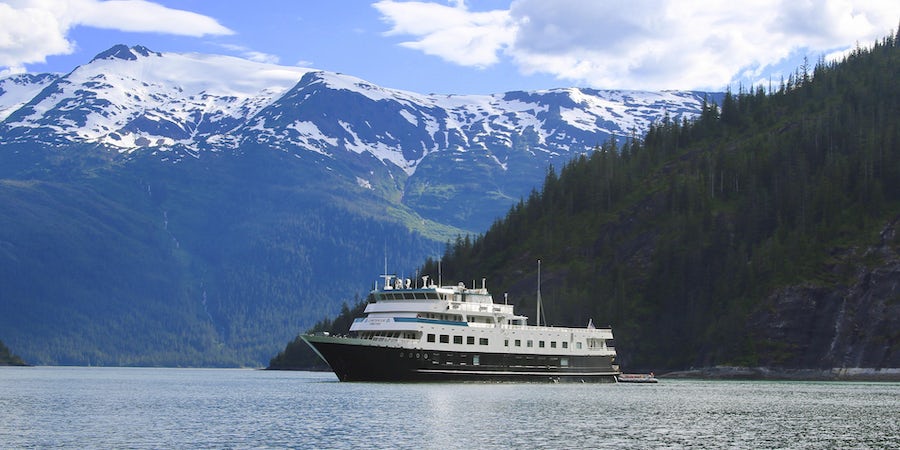 (4:50 p.m. EST) -- As one of the small ship lines that can still operate cruises in Alaska in 2021, Sitka-based Alaskan Dream Cruises outlined its plans for the cruise season, which it plans to start in April.

In a press conference held with media and travel advisors Thursday, the company went through its plans and procedures to keep operations running even during the global pandemic, and in light of Transport Canada's sweeping ban on cruise vessels through February 2022.

Zak Kirkpatrick, Corporate Director of Marketing & Public Relations for Allen Marine, which owns Alaskan Dream Cruises, noted the line intends to operate ""a pretty typical season for us." The line will have 11 itineraries on offer for 2021 across a fleet of six small vessels with embarkation ports in Sitka, Juneau, Ketchikan and Yakutat.

The line is aiming for an April 10 start of voyages aboard its 10-passenger Misty Fjord, with an additional vessel coming online in early May 2021. The ships in the fleet range from Misty Fjord to 76-passenger Chichagof Dream.  The newest addition to the fleet is a 12-passenger converted Bering Sea crab boat, Kruzof Explorer.

All of the ships in the fleet are made in the United States, with American crew, which would allow them to sail, even if their sheer size kept them outside the current cruise regulations put forth by the Centers for Disease Control and Prevention (CDC).

Itineraries are all designed by the Sitka-based Allen family, which founded Alaskan Dream Cruises ten years ago. The family are Alaskan natives of the Tlingit tribe (pronounced _kling-_it), and the cruises usually stop at small towns with high indigenous populations. The five-to-nine night itineraries also typically include a number of stops for wilderness exploration, with the ships often detouring to follow a pod of whales, for example.

Kirkpatrick noted bookings for the current Alaska season are strong, and a notice on the company's website Thursday afternoon advised the line was currently experiencing delayed response times "due to substantial call and email volumes."

The line has also reduced deposit requirements for future voyages from $750 per person down to just $49 per person.

Kirkpatrick also touched on several aspects that make Alaskan Dream Cruises unique amongst the cruise industry in Alaska, particularly where health and safety protocols are concerned.

Because Alaskan Dream Cruises is part of the Allen Marine group, which operates an extensive fleet of passenger vessels for sightseeing and transportation purposes, it has resources at its disposal that bely the small size of its fleet and vessels.

For example, any passengers who may have to be offloaded because of potential concerns around illness could be done so via one of the company's high-speed catamarans.

If any potential COVID-19 cases do arise onboard, the vessel would not sit at anchor with no place to go, as Allen Marine owns the docking space it departs from.

"We will not be in a situation where we're just anchored out indefinitely, because we have private facilities," said Kirkpatrick. "And that should give (passengers) a measure of peace of mind. It certainly does for us."

Kirkpatrick would not say if the line will require vaccinations for passengers or crew, but noted Alaska's vaccination rollout program is moving along at a good clip.

He noted that some of the native towns where the small ships stop are vaccinating residents at very high rates; Alaskan indigenous people generally received vaccines outside the regular distribution chanels. No cruise ship will stop in a town that doesn't want visitors, he said.

Most passengers booking Alaskan Dream Cruises are over the age of 60, and Kirkpatrick expressed optimism that more passengers would have the chance to be voluntarily vaccinated prior to the start of the season this spring.

In order to sail, passengers will have to complete a health questionnaire and will undergo daily temperature checks.

Currently, all passengers seeking to enter the state of Alaska must provide proof of a COVID-19-negative PCR test taken within 72 hours of arrival.

Anyone who tests positive for COVID-19 will be denied boarding.

"We can't let anyone aboard our vessels that will have a positive test," said Kirkpatrick.

To make the ships even more safe, the line is going to require passengers to wear masks in public areas. Hand sanitizer and other cleanliness measures to reduce any possibility of COVID-19 transmission will also be employed.

The line is also rolling out staggered dining times and educational lectures in an effort to encourage physical distancing. Kirkpatrick did note, however, that Alaskan Dream Cruises would not do this at the expense of solo travelers.

"We have this plan of being able to create spaces that are physically distanced, and to mandate different dining times throughout," said Kirkpatrick. "We wouldn't require a solo guest to be off in the corner for the duration of their own cruise."

The line is also looking at whether or not the groups that go out on small boats to view glaciers or wildlife will need to be even smaller, to ensure social distancing.

While Alaskan Dream Cruises isn't directly affected by the ban as a U.S-owned and flagged operator, Kirkpatrick stated the line strongly supports efforts by the Alaskan Delegation to temporarily repeal the U.S. Passenger Vessel Services Act to allow foreign-flagged cruise ships to bypass Canada and resume Alaskan voyages this year.

"As local Alaskans, it's critical to us that we state our strong support of a temporary waiver to sections of the law that will allow foreign flagged lines to sail to Alaska this summer," said Kirkpatrick. "It's impossible to overstate how critical this industry is to the State of Alaska."

Kirkpatrick noted that the ban by Transport Canada now forces many businesses in Southeast Alaska to last for up to 31 months in a zero-revenue environment.

That worry is shared by many in Southeast Alaska, including Skagway borough Mayor, Andrew Cremata; UnCruise Adventures CEO Dan Blanchard, and port officials and stakeholders throughout the region.

Repealing the ban temporarily isn't likely to pass. But most major cruise lines have yet to cancel their 2021 Alaska season as negotiations continue.