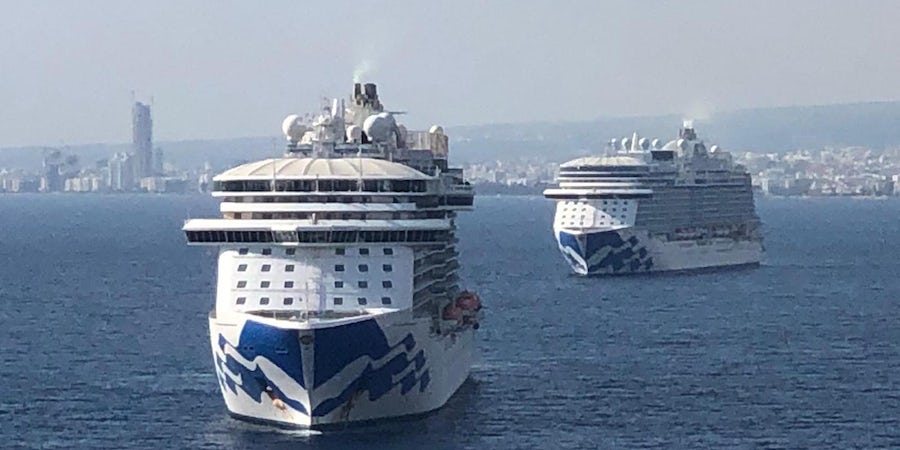 (5:45 p.m. EST) -- One thing we can say with certainty is the movement in the cruise world never stops, even if there is a worldwide pause on passenger sailings.

Your favorite ships continue to be sold, scrapped and -- in some cases -- getting ready for a restart around the world.

Here's a round-up of what's happened this week.

It's not often that you see three Princesses together, but for the lucky folk of Limassol, Cyprus, that's exactly the view they are enjoying.

And as a special treat to residents, the three ships sounded the "Love Boat" horn, from the popular TV series.

The ships are currently in lay up in Limassol, in preparation for the summer Europe 2021 season to start, hopefully in mid-May.

Huge thanks to Dirk Brand, the Hotel General Manager, who took this great shot from Enchanted Princess.

Norwegian Joy and Norwegian Encore are on the move -- Joy from the Caribbean to the Philippines and Encore from Southampton to Asia.

Why? Well sadly, both ships were preparing for a March restart, but as the restart dates get pushed further and further out, the line has decided to repatriate non-essential crew to their respective countries.

The announcement by NCLH comes weeks after Norwegian boarded thousands of crew members to ready the ships for a resumption of service after the CDC lifted its no-sail order.

However, the earliest ships are likely to restart cruising will now be May -- and even that date is far from definite.

"This extended delay in cruise voyages is longer than we anticipated when we brought crew back to our ships in late 2020 for a potential return to service in early 2021," a statement from the line read.

"The shift in our operational time period has required us to adjust our ship manning plan for the revised return to service timing. While it's a difficult decision to repatriate certain crew members to their home countries, it's tough decisions like this that have been made to ensure that safety is prioritized above all else."

No Room at the Port

As we have reported on numerous occasions (including in last week's Ship Sightings) there are currently a lot of cruise ships floating around off the South Coast of England.

Most are from UK lines and include Marella, Cunard and P&O Cruises -- but one of those ships is missing: P&O Cruises Azura.

But where is it? Well, it turns out that there are so many ships bobbing around off the south coast and coming in and out of port for refuelling and food, that Azura has had to head to Newcastle, where it has been since last week:

"Our home port of Southampton does not have berth availability for all our ships at the moment," a spokesperson for P&O Cruises said.

"As a result, to enable essential maintenance to be undertaken, Azura will be berthed in the Port of Tyne as part of our ongoing preparations to return to service. We would like to thank the Port of Tyne for its assistance and the welcome extended to the ship.

"We are very much looking forward to Azura being back in service, alongside the rest of our fleet, delivering future holidays for our guests."

P&O Cruises is currently scheduled to return to service at some point in April.

And finally, Royal Caribbean Group-owned Silversea Cruises and Celebrity Cruises have managed to sell one of their two Galapagos-based expedition ships -- after a year on the market.

The 48-passenger Celebrity Xperience was sold in December to Emerald Blue Cruises of Panama, and renamed the Emerald Dream, RCG confirmed.

However, Silversea's Silver Galapagos has still not found a buyer as the Covid-19 pandemic continues to suppress demand. Both ships are being replaced by new builds -- Silver Origin and Celebrity Flora, respectively.