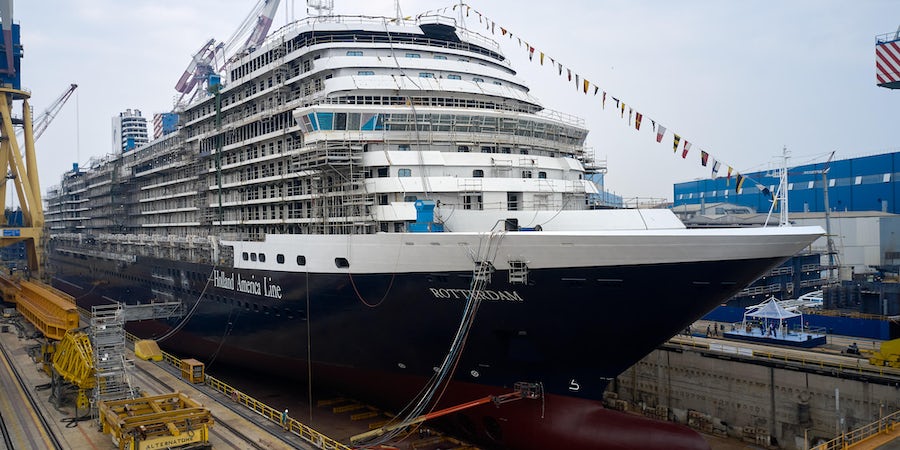 (Updated 1:08 p.m. EST) -- Cruise Critic has confirmed that Holland America Line's Rotterdam will be the sole Carnival Corporation ship to debut this fiscal year, following the compnay's announcement that it would only take delivery of one new vessel in 2021 during its fourth-quarter earnings call Monday.

Carnival Corporation's fiscal 2021 calendar year ends November 30, 2021. The delivery of Seabourn Venture, due to debut in December, is not affected at this time, as it occurs within the Corporation's 2022 fiscal year.

Separately, Seabourn confirmed with Cruise Critic that Seabourn Venture was still on-track for its December 2021 debut.

Costa Firenze and Carnival Mardi Gras, which were delivered late last calendar year, are also unaffected at this time.

Three other vessels, however, are currently affected.

Costa Toscana, AIDAcosma, and Discovery Princess are all likely to be delayed into 2022. While Carnival Corporation CFO David Bernstein told investors that no future confirmed newbuild orders will be cancelled, the corporation is electing to delay handover of newbuilds due to construction delays and financing considerations.

All three vessels were slated to debut in the latter half of this year. The 2,668-passenger Rotterdam, which was previously slated to be named Ryndam, was originally scheduled to debut this May before being pushed back to July 30, 2021 as a result of the ongoing coronavirus pandemic.

In an email to Cruise Critic, a Princess Cruises spokesperson confirmed Discovery Princess would now debut in Spring 2022.

"Discovery Princess voyages sailing in Europe in 2021 and in South America in 2022 have been cancelled," the line said in a statement. "Guests booked on departures roundtrip from Ft. Lauderdale sailing to the Caribbean will be moved to Regal Princess on the same departure dates, with the same itinerary."

Discovery Princess will debut in the spring of 2022 in Los Angeles, sailing west coast itineraries to the Mexican Riviera, Alaska and Pacific Coast.

AIDAcosma is under construction at Meyer Werft in Germany; Costa Toscana is being constructed at Meyer Turku in Finland; and Discovery Princess is being built by Italian shipbuilder Fincantieri.

Cruise Critic will update this story with more information as it becomes available.