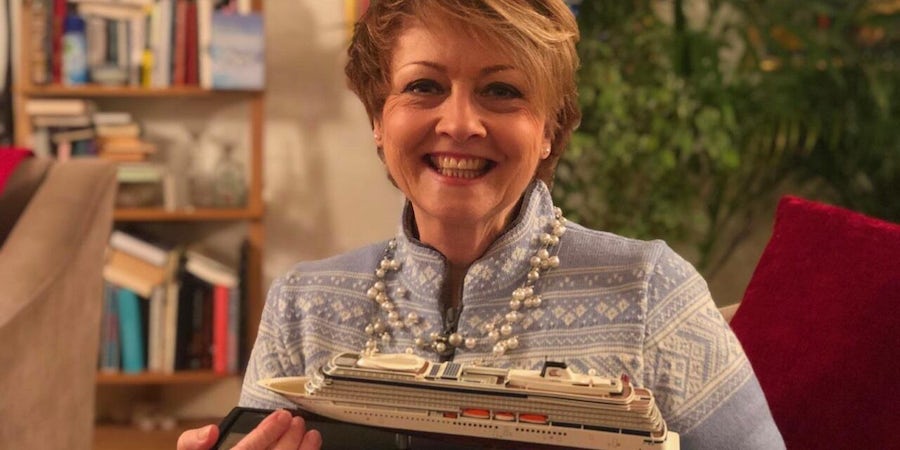 (11:45 a.m. EST) -- Viking has revealed TV presenter Anne Diamond -- one of the original hosts of morning TV in the UK -- will be godmother to its newest ship, Viking Venus.

Diamond is best known for her pioneering stints on Good Morning Britain on BBC1 and Good Morning on ITV in the 1980s, and latterly has been one of the hosts of Viking.TV, which launched in March last year.

The 930-passenger ship floated out in June 2020 and is now under final construction at Fincantieri’s shipyard in Ancona, Italy, for launch once the pandemic has eased and cruising resumes.

"On behalf of the entire Viking family, we are delighted and honoured to have Anne serve as the godmother of Viking Venus,” said Karine Hagen, Executive Vice President of Viking.

"Since the day we paused operations, Anne immediately volunteered to help our guests and crew manage through this period of uncertainty. As Britain’s favourite face at breakfast and in the morning on British TV, Anne became the face of Viking.TV on her weekly Thursday livestreams, where she has interviewed many interesting friends of Viking, while brightening the days of nearly two million viewers. There is no one more deserving to become the godmother of Viking Venus than Anne."

Anne Diamond said: "I am thrilled and honoured to be entrusted as godmother to the Viking Venus and cannot wait until we can celebrate her inaugural cruise in a safer and happier 2021.

"Back in March 2020, at the start of the global lockdown, when I rang my good friend Karine to ask if there was anything I could do, never did I think it might lead to such a fascinating journey. But exhilarating journeys are what Viking is all about! I am so proud to be part of the growth of the award-winning Viking.TV -- with special thanks to all my inspirational interviewees -- and now onwards, to the Viking Venus and a brighter outlook for travel."

She has also been an inspirational campaigner, having pioneered the 1991 UK cot death campaign following the death of her own son, Sebastian. The campaign saved over 20,000 babies lives and has inspired other life-saving campaigns worldwide. She is the only non-medic ever to hold the Medal of the Royal College of Paediatrics and Child Health.

Viking Venus is the seventh ship in the line's rapidly-expanding ocean fleet. It will offer Northern Europe itineraries when it debuts.