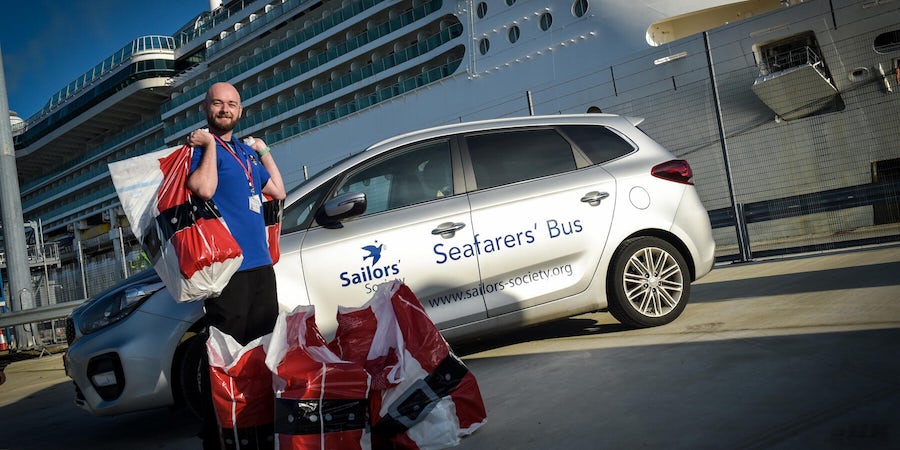 (3 p.m. GMT) -- A charity worker is delivering Christmas cheer to hundreds of cruise crew locked down off the UK coast.

Simon Mobsby, centre manager at International maritime charity Sailors’ Society, is inviting them to get their online shopping and post delivered to him at the centre -- which he then delivers when the ships come into port for refuelling and supplies.

Since cruising closed down in March, a number of ships, including P&O Cruises, Holland America Line, Royal Caribbean and Marella, have been moored off the south coast -- becoming a tourist attraction over the summer.

Several ships, manned by skeleton crews of around 150, regularly come into Southampton port for supplies and maintenance, but the crews are restricted to a small area of the port because of coronavirus.

Mobsby delivered more than 200 parcels last month to grateful seafarers and makes trips to the supermarket for them if they need anything else. He's expecting the demand to be greater as Christmas approaches.

"They have no access to the outside world at all, so I do it on their behalf," he says.

"Their faces light up when I bring them letters and gifts from family and friends. It’s a privilege to be able to play Santa.”

The charity is also wrapping its own Christmas gifts for the crews, most of whom have been on the ships since before coronavirus hit in March. And Simon is even delivering gifts from one cruise ship to the other.

“People who worked together in the past are now on different ships and they’ve not been able to see each other for nine months,” he says.

"One crew sent a gift order to me on WhatsApp and I delivered the presents to the other ship. When I explained who they were from, they were over the moon."

Sailors' Society has received donations of gifts for seafarers from its supporters, as well as a grant from the ITF Seafarers' Trust to provide small Christmas parcels in a selection of additional ports.