You may also like
Dismiss
Maine Opens to Overnight Cruises, Negative COVID-19 Test Required
Just Back From Hurtigruten's Finnmarken: The First Cruise Ship to Set Sail, Post-Covid
Can a River Cruise Still be Fun in the Age of Covid-19?
Live From MSC Cruises' MSC Grandiosa: What's it Like Sailing on a Big Ship in the COVID Era?
Costa Cruises Becomes First Carnival Corp. Brand to Restart Cruising
Photos From Paul Gauguin: Cruising Has Resumed In Tahiti
Live From Celebrity Edge: A Cruise That Seems Normal Again; "I'm So Hopeful"
Live From Royal Caribbean's Odyssey of the Seas: Why You'll Never Be Bored on This Cruise Ship
Royal Caribbean's Odyssey of The Seas Cruise Ship Officially Christened
Just Back From Allure of The Seas' Maiden Galveston Sailing: Hits and Misses 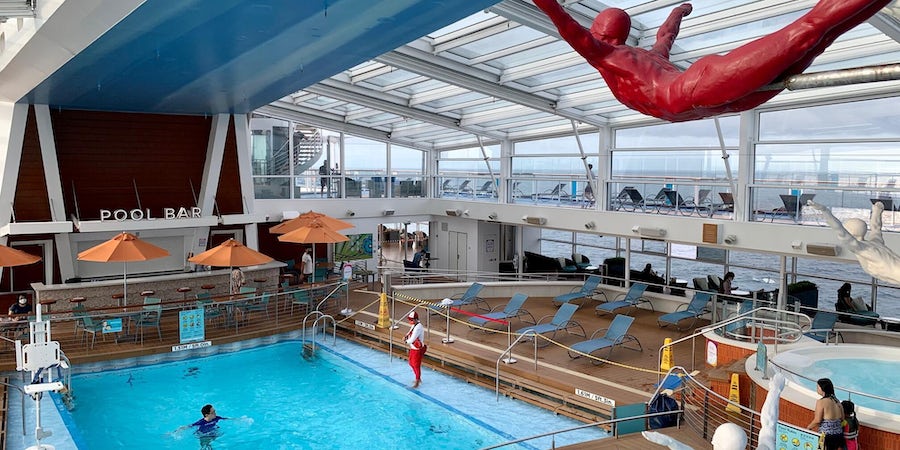 Just Back From Quantum of the Seas in Singapore: COVID Changes That Worked -- And Those That Didn't

On December 7, I boarded Royal Caribbean's third cruise to nowhere out of Singapore, my home for 15 years, on a three-nighter aboard Quantum of the Seas.

Thanks to Singapore having nearly eradicated COVID in recent months, often recording zero cases on any given day, the country has allowed limited cruising to re-start with caveats. These included no ports of calls, sailing with Singapore residents only and ships having no more than 50 percent capacity to allow for social distancing. (Genting's 3,376-passenger World Dream is the other ship that got a green light.)

While our cruise was cut short early due to a passenger COVID-19 test that ended up being a false positive, I still had several days to try out the changes that Royal Caribbean has implemented to sail in the pandemic era. This Quantum of the Seas cruise was a profoundly different cruise than any of the 100+ others I have taken over the years.

Here are the changes that worked and those that didn't.

The Singapore government has designed and implemented robust contract tracing protocols over the course of the pandemic. We who live in Singapore are used to them (as well as to mask wearing) so adjusting to the protocols onboard Quantum of the Seas was easy.

Starting at embarkation, there were multiple temperature checks and several layers of contact tracing. We all had to activate the Singapore government's  TraceTogether, an app (or portable electronic token) that uses Bluetooth wireless technology to track one's encounters, as well as wear Royal Caribbean's "Tracelet" watch-like wrist band at all times outside of one's cabin, for further monitoring. We would also be required to tap our SeaPass cabin card countless times at check-in points set up all over the ship.

When the ship was put into sudden quarantine mode early in the morning on the third day of cruising because of the passenger's false positive, contact tracing kicked into high gear. All passengers who had come into close proximity with him were isolated.

On the day of disembarkation, those of us who hadn't come into contact with him were allowed to leave, after getting a rapid response antigen COVID-19 test in the terminal (we were permitted to leave without knowing the result of the test; we'd be contacted within an hour only if it was positive). The fact that most of the ship was allowed to go is certainly a big improvement over the shipwide quarantines that were put into place on some lines at the beginning of the pandemic.

It wasn't perfect – the tapping of the key card in particular was often tedious. Since being stuck in quarantine is a big fear of pandemic-era traveling, however, multiple layers of contact tracing that can cut down that possibility is a big step forward for cruising's resumption.

My sailing had 1,680 passengers, about 40% of the ship's double occupancy capacity of 4,180. This was advantageous for social distancing purposes (it's easier to have space between people when there are fewer people) and in terms of logistics (lines for scanning and activities were reduced with fewer passengers on board).

The new system for completing the compulsory safety muster drill worked well. Just after we boarded, we simply had to watch a short how-to mustering video on our phone via the Royal Caribbean app, or on the cabin's smart TV. Then we had to check in at our actual muster station and tap our Seapass card there to prove it. For those who tried to skip this (or forgot), there were several ship-wide announcements made imploring everyone to do ASAP.

The self-service buffet in the Windjammer Marketplace is a thing of the past, and it was impressive how the crew has pivoted to a new system. Staff were on hand passing out plates and cutlery and at every station to spoon, spear and tong whatever passengers requested and pointed to. The drinks stations were manned by staff dispensing juices, coffee and ice, and additionally, roving servers carried trays of drinks to tables.

The crew here and everywhere were super friendly, helpful and enthusiastic, trying hard to make the inconveniences of COVID-era travel more palatable.

Yes, we had to laugh through our masks and couldn't enjoy a drink while we did, but the show must go on and it did. For a comedy-juggling act in the intimate two270 Lounge, we had to pre-book tickets and then choose a seat based on what wasn't blocked off for social distancing.

Having to plan so much ahead of time was annoying and occasionally led to disappointment. The inconveniences were worth it, however. Steve Rawlings, an old-school entertainer, croaked out witty one-liners as he impressively juggled chairs with his hands, balanced golf clubs on his chin and shot multiple ping pong balls out of his mouth like a tennis ball machine.

This is inherently challenging, as people tend to let their guard down when they are on vacation. At times, people didn't pay enough attention to being at least one meter (three feet) apart from one another. I understand it's hard to be constantly cognizant of not being too close to the next human.

When popular shows and events let out in the Royal Theatre on deck 4, for instance, there would be an exodus of closely-clumped-together people streaming past the nearby shops and eating venues. Though the monitors were reminding people, I noticed social distancing was also a challenge around the SeaPlex sports area; at the rock-climbing wall and FlowFider surf simulator, people were close together waiting for a turn or watching the others.

I felt a bit annoyed when people were oblivious to social distancing, but I also took it in stride because of Singapore's low COVID-19 count. If I had been cruising with folks in a region with more virus cases, then I would have definitely felt anxious when people were smushing together. The social distancing officers did politely remind people to spread out, but they can't be everywhere all the time.

A mandatory PCR (Polymerase Chain Reaction) test was required before boarding, and included in the fares. But the test was allowed to be taken 48- to 72-hours before the cruise, leaving a less-than-ideal three-day gap between testing and embarking the cruise.

Angie Stephen, managing director of Royal Caribbean, Asia Pacific, told me that they use the PCR test because it's the "gold standard" in terms of efficacy, despite the gap between testing and travel, adding that the strident contact tracing steps on board take up the slack.

Because of social distancing and mask wearing, the cruise experience felt different. It's not very easy to strike up a conversation and meet new people. Even with friends you're traveling with, you can't sit next to them on a bar stool unless you're occupying the same cabin (instead you can sit together at select tables).

Further, you can't bring or order a drink in the show lounges. Throughout the ship, the last call was at 10 p.m. and all glasses, full or empty, would be removed precisely by 10:30 p.m. These rules definitely put a damper on the nightlife vibes.

For another view on Quantum of the Seas' sailings in Singapore, read this Live Report from a Cruise Critic member. And join the conversation on our Royal Caribbean message board.

Heidi Sarna is the co-founder of the website QuirkyCruise.com. She was onboard Quantum of the Seas on behalf of Cruise Critic.