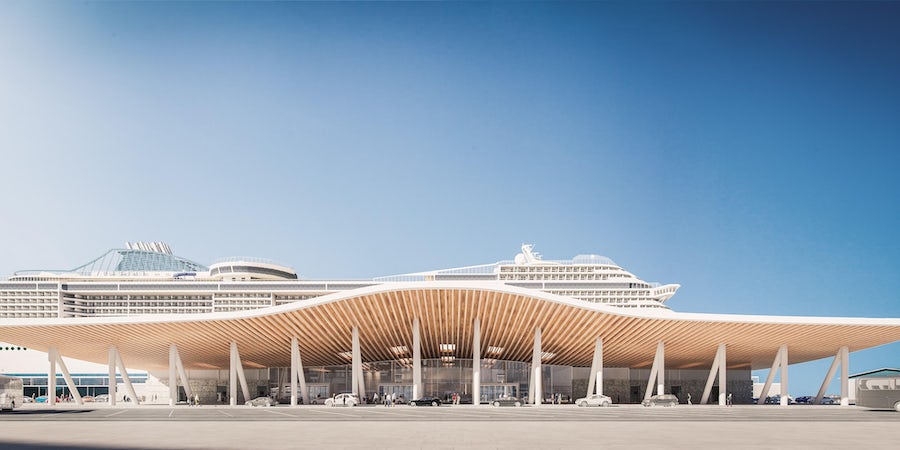 (12:01 a.m. GMT) -- In a huge boost for the cruise industry in the UK, Southampton is set to get a £55m new cruise terminal in a joint venture between MSC Cruises, Norwegian Cruise Line Holdings and Associated British Ports (ABP).

The fifth terminal, which is due to open in June 2021, is at the forefront of green technology with roof-mounted solar panels and shore side connectivity allowing ships to plug into electricity when they dock, meaning they can turn off their engines.

The terminal will have capacity for 6,000 passengers and is currently being built at Dock 10, which is in the Western Docks near City and Mayflower terminals, and walkable from Southampton railway station. Further details in terms of features will be released by ABP in January.

MSC Cruises has confirmed it will base MSC Magnifica at the terminal for the ship's longest ever season in the UK as Southampton becomes the ship's new seasonal homeport.

The terminal will also welcome more MSC ships operating Northern Europe itineraries with the UK as a port of call.

"It's a huge vote of confidence in the future of cruise in Southampton and the UK cruise industry," said MSC's UK MD Antonio Paradiso. "We firmly believe that -- and let's not forget that the UK is the third-largest cruise market in the world.

"This is also an opportunity for us to have more of our ships visiting the UK as a destination -- more ships and newer ships -- and to showcase them to the UK audience."

Paradiso added that the new terminal would allow MSC Magnifica to offer 95 percent Saturday sailings, which the line was unable to do previously.

In terms of booking patterns, Paradiso said he was seeing a strong trend for cruises departing the UK:

"MSC Magnifica is by far the most booked ship by UK cruisers for 2021 and you know how rich are fly-cruise programme is, but the message I'm getting now -- and it's a strong message -- is that customers want to sail from the UK."

MSC has gradually increased its presence in the UK market, with a full summer season from the UK in 2018 and a partial season in 2019, marked at the start of last year with the biggest ship ever to be christened in the UK -- MSC Bellissima in March.

The terminal project began in earnest around 18 months ago when MSC Cruises first went into talks with ABP, which operates Southampton Port.

"I see the opportunity to definitely invest in this and felt the time was right to have a long terms commitment with ABP in Southampton," Paradiso added.

MSC CEO Gianni Onorato added: "We are really proud to be further supporting the UK cruise industry at this incredibly important time for both the industry and the UK economy. At MSC Cruises we really believe in the potential of the UK cruise market and making this long-term commitment is evidence of that."

Although the new terminal will not open until June it will have all the necessary protocols in place in relation to post-COVID sailing, ABP Southampton confirmed:

"The health protocols that are needed will be in place that are relevant to the time," said Rebekah Keeler, Head of Cruise at ABP.

"We see this as a real vote of confidence in the long-term future of cruise. What this terminal does show in Southampton we remain extremely confident about a strong future for cruise.

"We've got support from two really key lines here, as well as government so we think the vote of confidence from a broad spectrum of entities is really shown in this announcement."