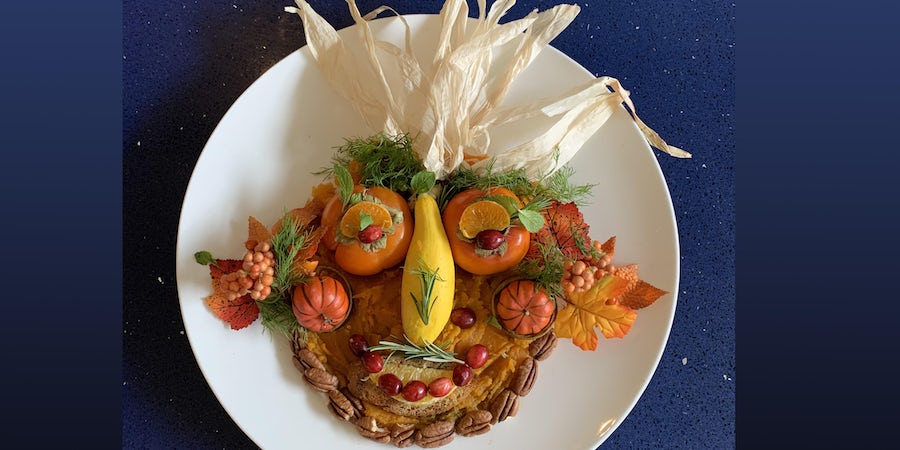 (8 p.m. EST) -- There are many things within the cruise world that we're thankful for -- and one of them is the irrepressible spirit of Master Chef Rudi Sodamin. Known originally as the guiding force behind Holland America Line's outstanding dining program (and a member of the Culinary Council), Sodamin has another claim to fame, besides the onboard restaurant Sel de Mer which bears his name. Since 2018, he has been the creative genius behind his own "Food Faces," which is exactly what it sounds like – clever faces put together by different ingredients. He's compiled photos of his top Food Faces into a book called "

Food Faces: 150 Feasts for the Eyes

;" some of the best also appear on places in his Holland America restaurant. We at Cruise Critic have loved the whimsical Food Faces ever since we laid eyes on them. And so we're beyond excited that Sodamin created a special Thanksgiving-themed Food Faces video just for us! (we never knew you could do such interesting things with sweet potatoes). {#widget:youtube|embed:89hTHS0dTz8#}Watch the video. And then look for Sodamin to appear in 2021 with a new venture, on sister brand Carnival. His new specialty restaurant Rudi's Seagrill will open for the first time on Carnival's new ship Mardi Gras -- and the Food Faces will be front and center. Dishes will be put together as "plates with personalities" using Sodamin's creative ideas. Just once more reason to be thankful for next year….