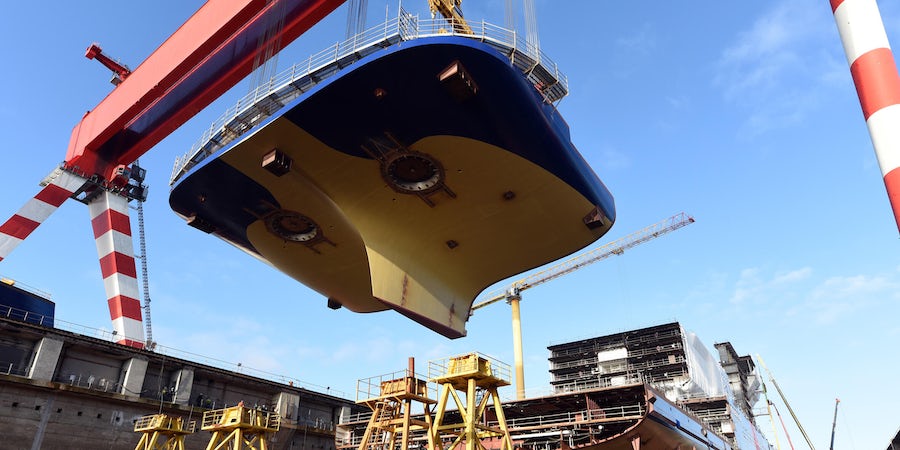 The keel laying and coin ceremony mark the first stage of major construction for a vessel.

The event in Saint-Nazaire was attended by Tobias King, Project Manager for Celebrity Cruises; and Sébastien Le Boulluec, Project Manager, Edge Series at Chantiers de l'Atlantique. Both had the honor of placing the ceremonial coin, which is welded into the hull during construction as a symbol of good luck.

The coin chosen for Celebrity Beyond, the third vessel in Celebrity's trendsetting Edge Class, pays tribute to suffragist and pioneering astronomer Annie Jump Cannon (1863-1941). Credited with the development of contemporary stellar classification, Cannon was also the daughter of an American shipbuilder.

"In a year that has continuously tested the strength of our industry, it is encouraging that we move forward with building Celebrity Beyond," explained Richard Fain, Royal Caribbean Group chairman. "Celebrity Beyond signals that as we prepare to return to service, we do so confidently and with great optimism about the future."

"This is a proud and exciting moment because Celebrity Beyond will continue to elevate an already incredibly innovative and transformative Series of ships for our brand -- and the industry," said Lisa Lutoff-Perlo, President and CEO of Celebrity Cruises. "I thank all of my amazing colleagues and our incredible partners at the shipyard for moving us one step closer to bringing Celebrity Beyond to life. We have some special surprises planned with Celebrity Beyond and I really can’t wait to share her with the world."

Celebrity Beyond is the third vessel in Celebrity's Edge Class that debuted in 2018 with Celebrity Edge. A sister, Celebrity Apex, was launched this year.

Celebrity Beyond is currently scheduled to be delivered in spring 2022.