You may also like
Dismiss
American Queen Steamboat Company Plans to Resume Cruises in July
Live from SeaDream: When Your Caribbean Cruise Has a COVID-19 Case
Transport Canada Bans Most Cruise Ships Until 2022; Move Kills 2021 Alaska and New England Seasons
"Just Shook to my Core": How Small Ships and Amended Laws Might Save the 2021 Alaska Cruise Season
Canada's St. Lawrence Cruise Lines Confirms 2021 Season Is A Go
Country Music Star Lee Greenwood to Play American Queen Steamboat Company River Cruises
Live From Windstar Star Breeze: A Cruise to Nowhere in the Caribbean
Live From Celebrity Edge: A Cruise That Seems Normal Again; "I'm So Hopeful"
Live From AmaWaterways: What It's Like To Be On A River Cruise In Europe Right Now
Transport Canada Lays Out Rules for Cruise Ships, Requires Passengers And Crew To Be Vaccinated 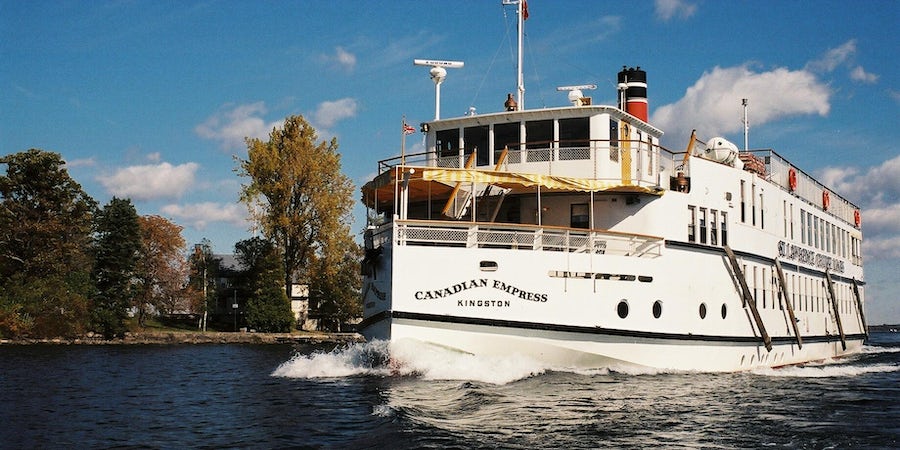 Cruising During COVID-19: Do You Tell Your Friends and Family You're Onboard?

(1:45 p.m. EST) -- If you're one of the few people able to take a cruise right now, do you tell your friends and family that you're doing so?

That's one question that came up on my fall trip on Canadian Empress, a newly renovated, replicated 1908 steamship run by St. Lawrence Cruise Lines (SLCL)

It was a strange season for the one-ship line, which usually cruises from its base in Kingston, Ontario, to places like Quebec City, Montreal and Ottawa.

After a shut-down summer, cruise line owner Jason Clark spent months debating with himself, and negotiating with both health and transportation authorities on whether he could safely conduct overnight sailings.

With a special provision for ships with fewer than 100 guests on board -- SCLC capped capacity at just 40, and we had only 26 for our sailing -- Clark was given the go-ahead, and scheduled four voyages for the fall, each five days and four nights.

"We had the will and desire to show the world that small-ship cruising can be done, and done safely," he told me.

On our October sailing, which navigated through the fall colors on the Thousand Islands —a series of historic and picturesque islands straddling the U.S.-Canadian border between upstate New York and Ontario -- strict protocols were in place.

In addition to mask rules, all crew needed negative COVID tests, and all guests were given temperature checks both before boarding, and daily, at breakfast. Meals in the Grand Salon were socially distanced, with just 13 people at each of two seatings, everyone at small tables that included only people in their own bubble.

Around the ship, at the masked games of shuffleboard on the top deck, or in the cushy seats at the stern, conversation amongst the guests, mostly aged 70-80-plus, often defaulted to one question: Did you tell your kids?

Clark said most do, but many not until the last minute.

He recalled the story of a man who literally called his two sons from the gangway of the ship on the very first sailing. "I'm paraphrasing, but he basically said, "Hey, I'm taking a cruise, and I'm on board now, and there's nothing you can do about it.'"

Cruise Director Trevor Houle, who was on board for the entire shorted season, said that a number of couples who stayed mum on the subject with their kids.

But one couple, he said, had a special reason for telling their son. They own a llama farm, and only informed him because they needed someone to feed and care for the animals during the days on board.

"They called him and said, "We're going!'" The son proceeded to call them every day, to make sure they were still safe and healthy.

On night, after dinner, I chatted with a group of four socially-bubbled friends—two couples—who sat together at the same table every night. Mask up, I pulled up a chair six feet from their table.

Neighbours and friends, they made the decision, along with a third couple, to travel together from a town about three hours away. They all drove in separate cars, in case one person didn't pass the initial temperature check and couldn't board. (All passed.)

"Our kids almost killed us!," one said with a laugh.

Another shared her reasons for coming, and presumably how she convinced her kids it's all going to be okay: "It's in Canada, we can drive, explore our own country—it was all plus, plus, plus."

And one man summed it up well: "We all said, well, we can always get off the boat, anytime we like, and leave."

Personally, I had the same issues as many of the guests.

I kept my immediate family in the loop, as I contemplated, and then decided to take the cruise, outlining for them all the details, emphasizing the protocols in place and the limited number of guests on board. They were fine with it, from the start.

Social media was another matter. Because I figured the opportunity for a nuanced understanding wasn't possible in that format —even if I posted photos of the cruise director pointing a thermometer at my forehead in the morning while I ate my scrambled eggs -- I didn't post online. Instead, I only shared the experience and pictures from the voyage with a very limited number of friends. The last thing I wanted was to respond to angry comments in between games of shuffleboard.

What about you? Will you tell your friends, family or children about your next cruise, if we're still in the COVID-19 era?