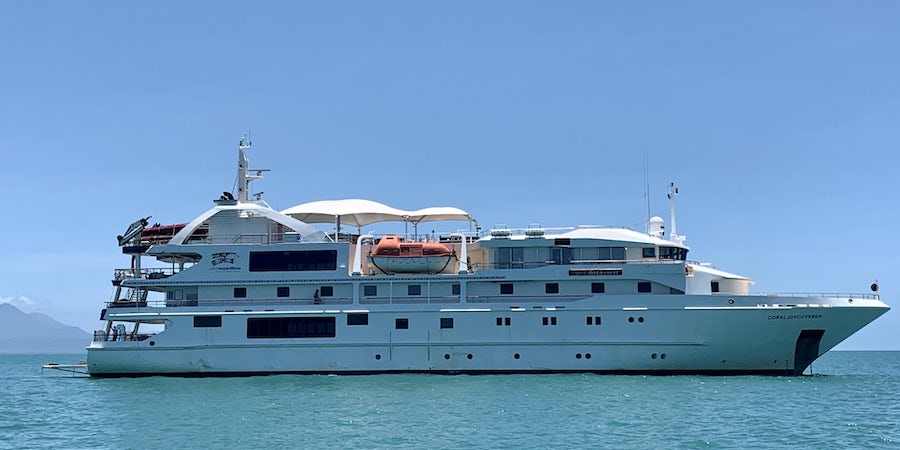 Just Back From Coral Discoverer: The First Cruise to Restart in Australia

Coral Discoverer has returned from its first cruise in seven months -- a week around the outer Great Barrier Reef, roundtrip from Cairns, where the Australian-flagged ship has been laid up since March.

The operator, Coral Expeditions, pioneered overnight cruises to the reef in 1985, so it's a special moment the company's restart is back where they started.

On the breezy spring evening of departure, it was a low-key sailaway, considering Coral Discoverer is the only ship operating on Australia’s east coast, which looks likely to continue for much of the summer down under, where foreign-flagged vessels are still banned. But the focus of this trip was health and safety, with passengers and crew subject to strict procedures before the fun could begin.

Coral Expeditions took no chances in its home state of Queensland, despite its impressive record in handling COVID-19 -- a total of 1,169 cases, six deaths, and only five active cases remaining today. The company worked with a medical agency to develop a SailSafe Plan to prevent virus outbreaks and gain final approval from local authorities.

For passengers, the new pre-cruise process begins after booking with a health questionnaire about coronavirus symptoms. This declaration is then corroborated by each person’s own GP, who also checks your temperature, one week before the departure date. Then, 24 to 72 hours before boarding, a swab test is conducted to provide proof of a negative result for COVID-19. We are also asked to self-isolate as much as possible for seven days. The all-Aussie crew undergo the same procedure.

No doubt this approach is extremely cautious and quite time-consuming but it gives everyone the confidence to cruise again. With Queensland’s borders closed to most of Australia and the rest of the world, the Great Barrier Reef itinerary can only be booked by locals or people who have spent more than 14 days in the state. We spend the night before the cruise in a Cairns hotel (included in the fare) and are then transferred by coach to the wharf, keeping the group in a virus-free bubble.

Life Onboard the Ship

Once onboard, everything feels relatively normal. The 72-passenger ship has enough space to accommodate its full capacity while adhering to social distancing guidelines, and our sailing had only 46 guests. As almost everyone is from the same state, socialising comes easily so the atmosphere is relaxed. Nobody bothers with masks, except the housekeeping staff, who also wear aprons and gloves, changed between cleaning each cabin.

Disinfecting is also ramped up, including spraying our luggage before it arrives in our rooms, and regular wiping of shared surfaces such as door handles and coffee machines. An onboard doctor takes our temperature every day and hand-sanitising is encouraged, but neither exercise is a hardship.

A noticeable difference is the removal of the buffet, leaving waiters to fetch your croissant, fruit or toast in the morning, on top of a hot breakfast with a choice of two dishes that change daily. Lunch and dinner also offer a choice between two entrees, mains and dessert, plus vegetarian and vegan alternatives. The food is healthy and delicious, no meal is repeated over the seven days, and the attentive waiter service feels like an upgrade. Mysteriously, on the first couple of days, morning tea or afternoon tea are missing from the schedule, leaving some people hungry — an unusual sensation on a cruise. The rest of the week, snacks appear, individually wrapped in plastic.

A treat of the trip is Coral Discoverer’s open bridge policy, allowing passengers to pop in and meet the captain while watching the navigation across the Coral Sea and around tropical islands. An engine room tour is also held by the chief engineer. There’s frequent friendly interaction with the crew, which makes the experience pleasantly welcoming.

The glorious centrepiece, of course, is swimming, snorkelling and diving in the famous UNESCO World Heritage Site. This itinerary ventures to the less visited northern precinct of the Great Barrier Reef and we use Coral Expeditions’ private moorings in several sites, so we barely see another boat or human.

Spending all week sailing through the area highlights the sheer magnitude of the world's largest coral reef system. Comprising 2,900 individual reefs and 900 islands over 2,300km, it’s about the same size as Italy or half of Texas, so there’s plenty of places to explore. Although some spots show damage from cyclones and global warming, our carefully selected reefs are magnificent. The coral is colourful, water clarity is exceptional and the abundant marine life presents in every imaginable shape, shade and size.

Osprey Reef is a drawcard for many, as it’s the most remote reef in the Coral Sea, some 300km from Cairns. The overnight journey is long and rough but worth it to explore a 2000-metre submerged mountain. Underwater visibility can be 30 to 60 metres, and it’s a hot spot for (harmless) reef sharks. The Ribbon Reef, spanning 670km, is most people’s favourite. With the place to ourselves, we see green turtles, reef sharks, giant clams and some enormous fish at two different locations, two hours’ sailing apart.

For a change of pace mid-voyage, we disembark and head inland to the Daintree, Earth’s oldest rainforest and another World Heritage Site, for a river cruise commentated by local guide Bruce Belcher. In the first 15 minutes we spot two crocodiles, along with hundreds of native birds singing and squawking above the palm trees and mangroves.

On three mornings, sunrise hikes are offered at Cooktown, Lizard Island and Fitzroy Island (pictured above), each one steeper and more challenging with awesome panoramic views. Other excursions include the James Cook Museum, a turtle rehabilitation centre and easier strolls to beautiful beaches.

Our evenings are spent on deck or barefoot on white-sand cays, indulging in sunset drinks. With no live entertainment onboard, we make the most of the striking scenery and complimentary wine and beer, before dinner and an early night. Who needs a musical in a big ship’s theatre when you can doze off to the lulling sound of waves and wake up every day to a dazzling new show underwater?